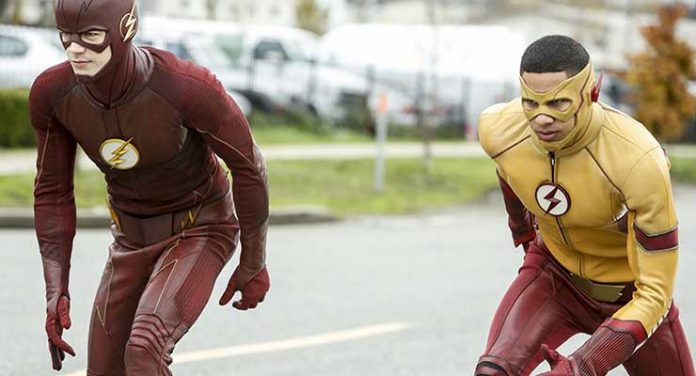 The Flash: Season 3 continues the adventures of DC superhero The Flash/Barry Allen (Grant Gustin) and further wraps elements of the comic book mythology into the television world. While this season is probably not as consistently strong as the first and second seasons of The Flash, it still remains a compelling watch and arguably the strongest DC has to offer on television today next to Gotham.

In The Flash: Season 3, Barry Allen finds himself dealing with the consequences of time travelling to the point in the past where his mother was killed and saving her, thereby creating the so-called Flashpoint Paradox. Now the lives of his friends and team Cisco (Carlos Valdes), Caitlin (Danielle Panabaker), Harrison Wells (Tom Cavanagh), his foster father Joe (Jesse L. Martin) and Barry’s love, Joe’s daughter Iris (Candice Patton) have all been changed immeasurably. Add to this a new Speed God named Savitar who vows to crush The Flash and kill Iris, and Barry’s world has really taken a dark turn since Flashpoint, one that he just can’t fix.

The The Flash: Season 3 is also defined by a number of crossover episodes with other DC properties Arrow and Supergirl – all of which appear on this Complete Third Season release. Unlike the Supergirl: The Complete Second Season release, which felt a bit strange because it was missing the crossover episodes. Perhaps to take advantage of the new King Kong movie’s publicity, this season also had the excellent two-episode event with the sentient giant gorilla Grodd – “Attack on Gorilla City” and “Attack on Central City.” We also get the somewhat goofy alien invasion episode aptly named “Invasion!” that acts as a vehicle to bring together the DC superheroes Arrow, The Flash, Supergirl and The Legends of Tomorrow.

The Flash: Season 3 is shot in HD and arrives on Blu-ray in an AVC 1080p encodement from Warner Bros. It is a solid transfer with good color and a decent amount of contrast and detail, although one can spot some slight issues with banding here and there. It certainly isn’t an image that rises to the level of reference quality in today’s market of Ultra HD and HDR, but it is still pleasing and looks far better than streaming and broadcasts. It does away with the compression noise, posterization, and crush issues that those formats suffer from.

The Flash: Season 3 comes with a lossless DTS-HD Master Audio 5.1 mix that is in line with what we usually get from Warner for these TV series. The mix is a bit front-heavy and the surround channels carry mostly a heavy dose of ambient effects. The midrange sounds a little muddy and sounds effects are really pumped up, although low-end sounds more chunky than it does nicely extended and balanced. Dialogue sounds great, however.

The Flash: Season 3 is stuffed with extras in this Blu-ray set from Warner. Much of them are featurettes on the comic book origins of the season’s story arc and new characters, but there are also features on the crossover episodes and interviews.

While The Flash: Season 3 did not fall off a cliff like Arrow, it hasn’t quite been as strong as it was in its first or even second season. Still, the series remains satisfying and if it can avoid some of the pitfalls that are inherent in any time travel paradox storylines, which hindered it from keeping an even and untangled story. The Complete Third Season is a solid Blu-ray package with a good set of extras and satisfying picture and audio.