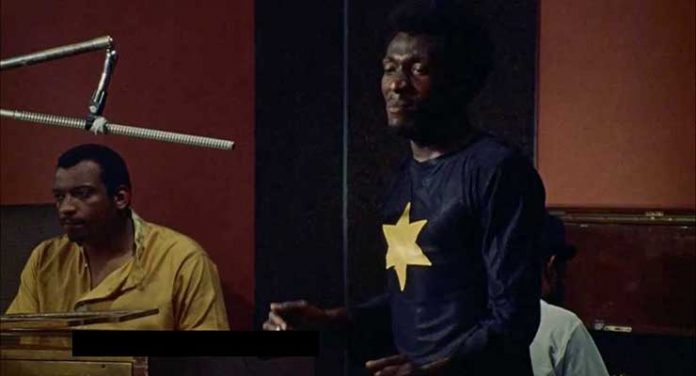 Reggae star Jimmy Cliff’s natural “rude boy” performance is what helped catapult the success of The Harder They Come to international cult status. Director Perry Henzell, himself a white native Jamaican, wanted to make a film that showed the real life for most Jamaicans and that would be successful amongst Jamaican theatergoers at home and abroad in places like America and the United States, and that he did.

The story follows Ivan (Cliff), a young singer from the countryside dreaming of success in Reggae, but he finds life in the big city of Kingston rough. Ivan gets into a knife fight with a man running afoul of the law. After he is released, he cuts a hot reggae track, “The Harder They Come,” with a corrupt music executive who strongarms him into selling away his rights to the songs for a mere $20. Later, unable to get work, Ivan gets involved with the marijuana trade and kills several cops during a raid. The unscrupulous music executive begins pushing Ivan’s song on the radio to take advantage of the publicity and the song becomes a hit, turning Ivan into a folk hero.

The Harder They Come doesn’t pull any punches. Henzell’s film is straightforward about the crime, poverty, and corruption that were or are often intertwined and commonplace in Jamaican society and work to oppress the poor and working class. This is no picture postcard vision of Jamaican life; this is the seedy side the tourists rarely see.  What makes it an appealing story is that Ivan’s story is a universal one about a guy who is kicked while he is down, turned away at every turn while trying to look for honest work, even at one point yelled at for being lazy while asking for a job, and he eventually becomes an anti-establishment folk hero against the corrupt system that turned him into a criminal.

If Jimmy Cliff and his character are the central force that make the film worth watching, it’s also the music that give its heart. The reggae pulse of hit after hit, with highlights such as “Sitting in Limbo,” “You Can Get it If You Want It,” and the title track.

This Shout! Factory release also comes with the long-lost follow up film from director Perry Henzell, No Place Like Home in a brand new restoration, released for the first time anywhere.

The film arrives on Blu-ray with a new restoration scanned at 4K from the original 16mm camera negative and encoded at AVC 1080p, framed in its original aspect ratio of 1.66:1. This is not a film that has ever looked great, but this new transfer is a marvel. The 16mm source looks natural, clean, and there’s more than enough detail remaining. Darker scenes do tend to look noisy, but that’s not due to this transfer. Colors are as accurate as can be for the film stock and era.

The Harder They Come comes with its original monaural soundtrack in DTS-HD Master Audio 2.0 and also a 5.1 mix in DTS-HD Master Audio. The 5.1 mix sounds clearer and warmer, but a little artificial to my ears, although it does separate some of the instrumentation in the reggae soundtrack and adds more low end. Still, clarity of the dialogue isn’t great in either track due to the original recording, but it does sound authentic to the original film.

Shout! Factory gives us a packed, 3-disc set with an abundance of bonus features including a brand new restoration of Henzell’s long lost follow-up film No Place Like Home and a fantastically informative audio interview by author David Katz,

The Harder They Come (Disc 1)

This cult classic has never looked or sounded better and now it also comes packed to the brim with extras. If you’re a fan of the film or reggae then this is a must.

The Harder They Come: Collector’s Edition is out on Blu-ray August 20, 2019

3.9 / 5 TheaterByte Rating
{{ reviewsOverall }} / 5 User Rating (0 votes)
R | Not Rated (No Place Like Home)Rating Certificate
International Films | Xenon Pictures | Shout! FactoryStudios & Distributors
Perry HenzellDirector
Perry Henzell | Trevor D. RhoneWriter
105 Mins. (The Harder They Come) | 95 Mins. (No Place Like Home)Run Time
$39.97MSRP
20 August 2019Release Date
1.66:1 (The Harder They Come) | 1.85:1 (No Place Like Home)Aspect Ratio
AVC 1080pVideo
English DTS-HD MA 5.1 (The Harder They Come-only)| English DTS-MA 2.0 MonoAudio
EnglishSubtitles
The Creative Content
The Video
The Audio
The Supplements
Summary
Ivan (Jimmy Cliff) dreams of becoming a reggae star, but dealings with a corrupt music producer and marijuana dealers lead him into a life of crime in this gritty, realistic look at the seedier side of life in Jamaica from Director Perry Henzell, which helped make reggae an international genre.
What people say... Login to rate
Order by: