The Mitchells vs. the Machines (Blu-ray Review) 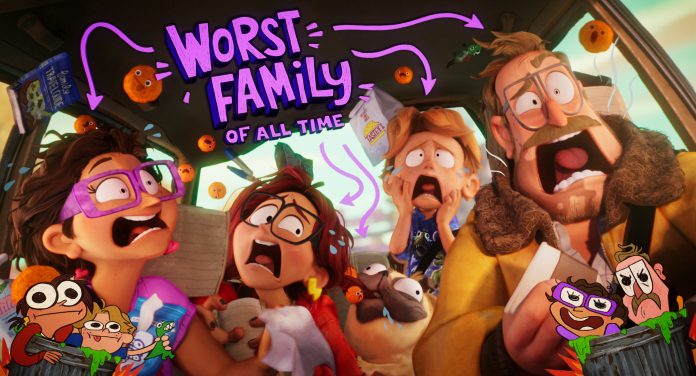 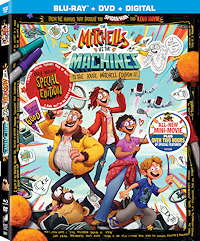 Writer/Directors Michael Rianda and Jeff Rowe (Gravity Falls) pair up for their first feature film with The Mitchells vs. the Machines, an animated adventure that utilizes Sony Pictures Animation’s “comic book” 3DCG animation technique, with a few added twists, as first scene in Spider-Man: Into the Spiderverse.

The story in the first act is nothing too groundbreaking. Katie Mitchell (voiced by Abbi Jacobson), an artistic teenager who likes making short video clips on her phone (this will come into play later) is accepted to the university of her dreams and more than glad to get away from home since she and her dad Rick Mitchell (Danny McBride) just aren’t getting along anymore. Her mom Linda (Maya Rudolph) feels caught in the middle of their constant bickering and is trying to play peacekeeper all the time. Meanwhile, her younger brother Aaron (Michael Rianda), a dinosaur obsessed, nerdy kid is just sad his big sister will be leaving and moving so far away. Feeling guilty about how their relationship has deteriorated and trying to patch things up before she leaves, Rick cancels Katie’s flight to college the night before she is set to leave and instead plans a family trip across the country to take Katie to college.

The film then perks up, when the world’s machines, run by a hyper-intelligent AI called PAL, turn on the humans and try to take over the planet. The Mitchells are forced to band together to try to defeat the machines, aided by two defective robots (Fred Armisen and Beck Bennett) who become like part of the family.

The message hidden not far below the surface in Rianda and Rowe’s hyperactive film is the usual about how we spend too much time on our devices and not enough time engaging with each other, but eventually a heartwarming story about family bonds does manage to break through even if the directors ironically fall prey to the dangers they are speaking out against with technology, such as short attention spans, constant interruptions of meta comedy and animated sequences overlaid on the main image, and the breakneck pace at which everything takes place, offering no time for much character development.

The digital animation for The Mitchells vs. the Machines, utilizing a 2K digital intermediate, comes to Blu-ray in a 1080p AVC encodement framed at 1.85:1. This film streams on Netflix in an HD with Dolby Vision HDR format, but since they have not released it on 4K Ultra HD, there’s no HDR here, and while the colors still look amazing, they do lose some of the glow and ‘pop’ they have in the streaming Netflix version. That said, this transfer looks beautiful and almost organic, and has crisper details than the stream. The artistic choice to layer the image with some artificial grain does soften the overall image a tad so everything isn’t quite as pristine as some other 3DCG animated movies.

The Mitchells vs. the Machines comes with a splendid English DTS-HD Master Audio 5.1 mix. Although this is not Atmos (or DTS:X) and therefore has no height channels, you never miss them with the way the sound designers make full use of the channels to engulf you in the chaotic soundscape of The Mitchells, spreading many foolery effects around the room, panning things  past, though, and around you, moving dialogue at times to track movement on the screen, and, oh, providing, big, bombastic low end to underpin the sound effects.

Sony includes over two-hours of bonus features in this release, including an all new animated “mini-movie,” filmmakers’ commentary, and the extended cut of the film. There are also cool family activities and behind-the-scenes making of featurettes with the crew.

A fun if sometimes exhausting animated feature that dazzles with its visual style and aural soundscape. Sony provides a reference Blu-ray that is only lacking the HDR the film streams with on Netflix to complete the package.

The Mitchells vs. the Machines is out on Blu-ray+DVD December 14, 2021 from Sony

Load more
The Mitchells vs. the Machines (Blu-ray Review)On a family road trip to take their eldest daughter to college in order to mend a failing relationship between father and daughter before she goes to school, the Mitchells must band together to fight machines being controlled by a global AI trying to rid the world of humans in this fun, visually stunning Netflix Original from Sony Pictures Animation.