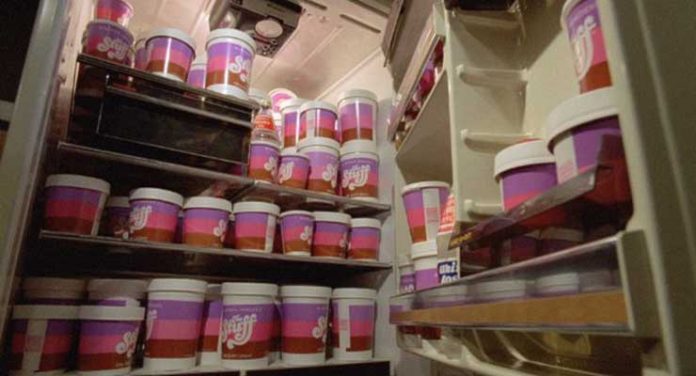 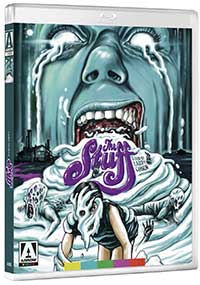 The Stuff was Larry Cohen’s satirical love letter to ’80s consumerism gone amok in the United States. The stuff is literally stuff that has seeped from the earth in a milky-white marshmallow liquid that once consumed slowly (or quickly depending on how much product is ingested) consumes the victim from within. It turns folks against one another and usually results in assimilation or a horrible death.

Marketed as a tasty dessert “The Stuff” has taken over the country and over the citizenry. It’s delicious and doesn’t even stain when spilled. When David “Mo” Rutherford (Michael Moriarty) is hired to track down the source of The Stuff and what it is composed off by some product competitors – he’ll be in for the shock of his life.

I remember watching The Stuff on television back in the ’90s and thought it was a weird one. The scene of the little boy eating shaving cream to disguise the fact he was not eating the stuff from his possessed family always stuck with me growing up. I don’t know why – the scene plays fine but it is creepy. The stuff itself reminds me of liquid marshmallow when it spews all over the place. At rest and in its container the stuff may or may not pulsate and it does have an adverse effect when fire is introduced.

The Stuff is total horror-satire and was filmed at the height of Regan being in office. Some may say that it’s a commentary on “Reganomics” but I think that might be taking it too far. I will say that it’s a critique on society and how easy it was for people to be swayed by crappy (and smart) advertising for even crappier items they didn’t want. Models and dancers on television gleefully promote The Stuff and folks have got to have it. Why? Who cares – everyone is eating The Stuff and so should we! Keep in mind that The Stuff was released in 1985.

One could almost say that The Stuff plays distant cousin to John Carpenter’s The Live – The Stuff predates it by three years or so. Larry Cohen, jack of all trades, wrote, produced, directed, etc., and since the film was done on a low enough budget he secured he was free to go all out and get most of his ideas on the screen. It works, with exception to some plot points that are never expanded on. What is The Stuff? Where did it originally come from? What does it want? Don’t go into this film expecting solid answers, because you won’t find any. The film is more of a journey into a “blinders to the world” kind of thing. You’ll have to just go with an abstract narrative and fill in the blanks yourself.

Production values are decent and the FX-work is great, but the acting can get a tad bit awkward along with Paul Soriano’s character that grinds the film to halt and is somewhat incongruent to what has happened before that. Outside of that – The Stuff has some solid ideas and will give viewers a hearty slice of 1980s satire pie, because they certainly don’t make them like this anymore. The Stuff is the stuff.

The Stuff is presented in 1080p, 1.85:1. The 30-year old film looks fantastic. There’s a fine grain structure that remains constant throughout the picture’s entire running time. Colors are big and bold and the neon signs featuring the iconic “The Stuff” logo look bright, colorful, and garish – absent of pixilation and banding. Contrast and sharpness levels are also steady, with no fluctuations in quality that I could detect, though some scenes, do seem hazy in some shots — I’m assuming it was that kind day during filming. This transfer is a winner!

The Stuff is presented in LPCM mono 1.0. The dated soundtrack is mastered in 24-bit and even though it’s

limited in terms of envelopment — not surround, etc., the channel still carries the cheesiness and horror through without problems. Dialogue, music, effects, etc., all share the confines of the center channel without falling over each other. It’s a great sounding audio track.

The Stuff comes remastered in 2K and features a one hour-long documentary and a trailer commentary by director Darren Bousman – he explains what an influence the film was on his work. The original trailer is also included and is in high-definition. It’s not a bad a package at all – the documentary is excellent.

The Stuff is fun enough, but as soon as Paul Sorvino’s character enters the picture it loses steam and focus, before recovering for the final scenes. Arrow Video continues to impress with a fantastic presentation. The hour-long documentary on the making-of the film is also great and was recently done. It added lots of insight to the film and Larry Cohen is certainly a character. The Stuff is recommended.