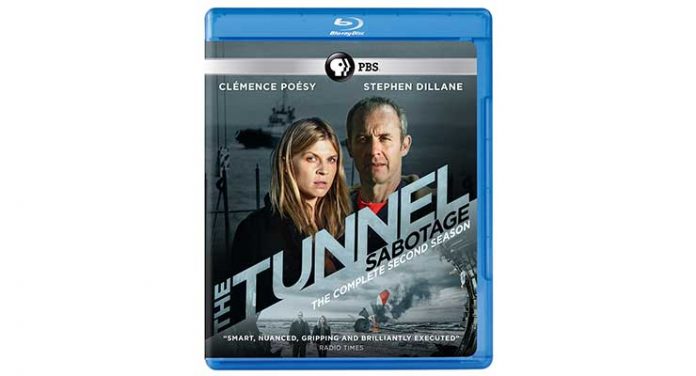 The second season of the Anglo-Franco crime/mystery series The Tunnel, The Tunnel: Sabotage, reunites English detective Karl Roebuck (Stephen Dillane, Game of Thrones) and French detective Elise Wassermann (Clémence Poésy, The Ones Below) to solve a new intrigue. After a French couple is abducted from the Eurotunnel in front of their traumatized young daughter, the investigative duo must hurry to solve the mystery, but as they begin to investigate, a terrorist group hacks into an airplane and crashes it into the English Channel killing everyone on board. Are the crimes connected? The answer may lie with the seductive Eryka Klein (Laura de Boer) who quickly becomes a person of interest in the investigation, but also a surprising love interest for Elise.

Sabotage has so many plot twists you’d be forgiven for needing a neck brace while watching the series; and while it is an addictive and well-acted mystery drama, one can’t say that the neo-noir aspects of this drama are well scripted. It isn’t too complicated at all to unravel the mystery of who is behind the murders, ultimately, y the time you make about a quarter of the way through. The excitement lies in the surprise of what twists the plot and subplots will take.

As always, Clémence Poésy is electrifying and seething with sexuality even as she plays the cool, pragmatic, and calculating Elise. She’s offered an opportunity in this season to expand her role and unleash a little more emotionally. And Stephen Dillane’s Karl Roebuck is the perfect counter to his Game of Thrones personality – less devious and underhanded, more disorganized and vulnerable, but no less brilliant at what he does.

The Tunnel: Sabotage arrives on Blu-ray in an AVC 1080i encodement from PBS. Apart from the occasional hint of banding and slight noise in some of the shadows, this is a solid transfer with crisp detail, natural color reproduction and good contrast.

The English/French bi-lingual DTS-HD Master Audio 5.1 soundtrack is subtle, but provides some good atmospherics. I found that turning on the Neural:X processing for this one enhanced some of the foley effects in the surround channels and obviously boosted the ‘immersive-ness’ by engaging the height channels. Even without that, the mix is well-balanced if just a tad dry at times, but with good clean dialogue and the latter is what drives this series the most.

While not in the class of classic mystery series, The Tunnel: Sabotage is certainly a Grade-A guilty pleasure crime drama with superb performances from its leads and a high production value. The Blu-ray release looks solid as well.