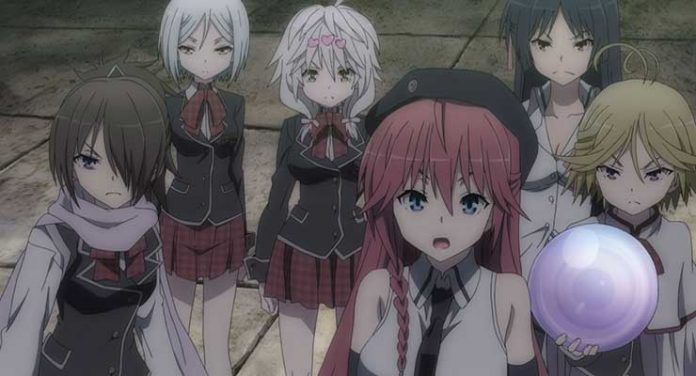 Trinity Seven is based on the fantasy manga series written by Saitō Kenji with art by Nao Akinari. It follows main male protagonist Kasuga Arata who we meet when he suffers a tragedy one morning when a magical phenomenon known as a “Breakdown Phenomenon” causes his childhood friend and cousin Kasuga Hijiri to disappear in front of his eyes. After receiving a powerful book of a magical spells, a Grimoire, a powerful mage, Asami Ririsu is sent to kill him, but Arata instead joins forces with her and ends up joining the magical academy she comes from. There, Arata learns he is something called a “Demon Lord Candidate,” a person of great magical power who has the potential to become a Demon Lord and wield great, dark magic, but all Arata is concerned about is being able to get his cousin Hijiri back. His shortcut to that is to befriend the so-called Trinity Seven, the most powerful mages at the academy, and make them his pawns, or so the school’s principal says. Of course, this being anime, Trinity Seven all turn out to be cute girls with their own unique personalities, and Arata finds himself surrounded by a virtual harem.

First there’s the mage/teacher who was sent to kill him, but is now his teacher meant to keep him in line, Ririsu whose magic manifests as a gun, then there’s the ninja Kazama Revi, the icy Kannazuki Arin who claims to be the wife of whoever is to become the Demon Lords, Yamana Mira, a tsundere and head of Grimoire Security who uses a magical orb that can reflect all magic, Fudō Akio, Mira’s second in command whose magic is a great physical strength, Kurata Yui, who lives in the school’s dungeon and can bring people into her dreams, and Rīzerotte Sharurokku, a somewhat perverted but sexy girl who obtained a Demon Lord element and initially fought against Arata until he helped her escape from the time dimension she trapped herself in.

If you like a little action, fan service, and paranormal mixed in with your typical high school harem anime series, then Trinity Seven is the series for you. Admittedly it mixes the usual ecchi and romance up rather well so that you hardly realize you’re watching the same thing again. It looks like it’s going to be a simple fantasy series, but then the harem builds, the gags surrounding Arata’s unconscious ability to always end up in unusual circumstances with the girls, like falling between their legs, stumbling and grabbing their breasts, or unwittingly developing a form of magic that strips them naked, takes hold. And that’s just the icing on the cake, because the story arc is actually a good one that involves Arata seeking out his cousin and learning along the way the real secrets of the “Break Down” phenomenon and what happened to her. 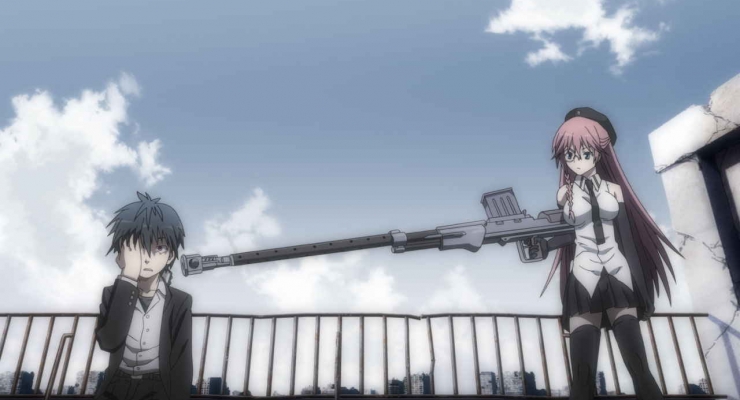 Trinity Seven looks exceptional in the AVC 1080p encodement on Blu-ray from Sentai Filmworks. The digital animation is really clean and crisp with vibrant colors and free from stairstepping and noise. Mild banding can be spotted, but it doesn’t hinder the detail in the overall presentation.

The original Japanese-language track and the English dub are included in DTS-HD Master Audio 2.0 stereo mixes. The sound is excellent given we only get two channels here. The dynamics are wide, the midrange is punchy, and there is an exceptional amount of stereo separation. The voice cast does a bang-up job on the Japanese track, which is what I used as my reference for this review. Checking in on the English, I was disappointed by the talents on offer and didn’t feel as engaged by the characters, but the sound was just as good.

Only clean opening and closings and additional Sentai Filmworks trailers are included in this 2-disc Blu-ray set.