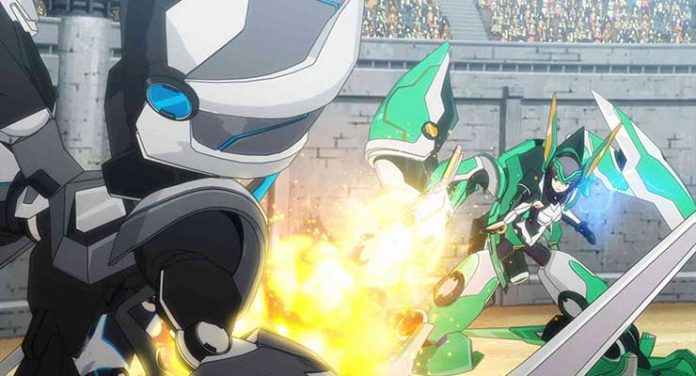 Undefeated Bahamut Chronicle is based on the Japanese light novel series Saijaku Muhai no Bahamūto, lit. “Undefeated Weakest Bahamut” written by Akatsuki Senri and illustrated by Kasuga Ayumu. The series follows the male protagonist Lux Arcadia, former prince of the corrupt Arcadia Kingdom that was overthrown five years prior to the series’ beginning. Now technically a criminal who must work as a handyman to repay the debts owed to the new Kingdom of Arismata by the previous royal family, Lux falls through the roof of the all-female Royal Knight Academy into the bathing area where he witnesses the new kingdom’s Princess Lisesharte Atismata completely naked and sees a secret she wants to keep hidden from the world. Lisesharte challenges him to a Drag-Knight dual. The Drag-Knight is a form of full-body mecha armor activated from specially powered swords that the Knights carry on them. Lux wins the dual, but only after saving Lisesharte from an enemy attack that interrupts their dual. He is accepted into their all-girl academy to train as a knight in the new kingdom, and he soon finds himself surrounded by a bevvy of buxom girls who, though at first they are suspicious of him, all want to get romantically involved with him. These include a busty childhood friend named Phi-chan with a sweet tooth, Phi-chan, Lisesharte herself, and a number of others. Even Lux’s younger sister Airi attends the academy, although the writers thankfully avoid the incestuous overtones so pervasive in anime. Lux joining the Academy and aligning himself with the new kingdom’s princess stirs up resentment in a growing resistance left over from the old regime. This leads to battles and numerous plots against Lux and Lisesharte and the Academy. It also starts to unravel secrets from the past about both royal families that no one knew.

While this series is not without entertainment value, I would hardly call it innovative or even riveting. The story arc is somewhat confused. There’s an introduction about the halfway point of a sub-plot involving some sort of archive and A.I. that looks like a preteen girl who acts like a ditz. It culminates in a big battle that resolves some things, but somehow manages to feel anticlimactic and out of place in the story. It’s sot of like they wedged in so many things just to hit all the elements they wanted in this series – high school, fan service, mecha, harem – and forgot about the good storytelling. I never felt engaged with any of the characters. I wasn’t rooting for Lux or Lisesharte to ‘win’ or lose anything. It just reached the end and it was the end.

That said, the series looked great — the action sequences were often mesmerizing and the fan service, for those who like that sort of thing, was sexy. There was good use of 3DCG for visual effects, it never stood out. Some of the backgrounds could have used a little more detail at times. I found sometimes some of the foliage just looked like an amorphous blob, but it didn’t detract too much from the overall quality. 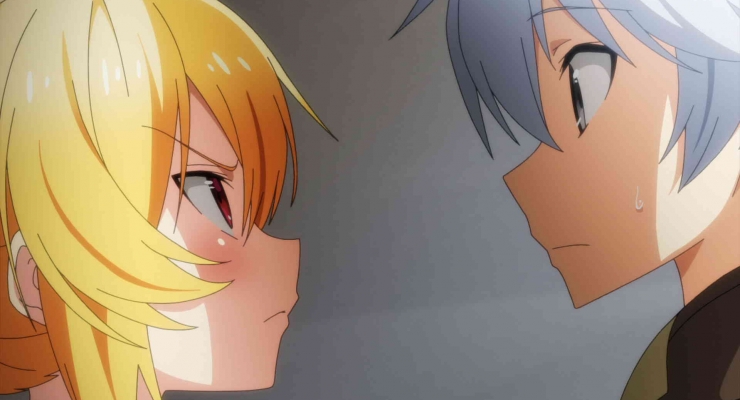 This series looks very good in this 1080p AVC encodement on Blu-ray. There is very little to complain about apart from the very slightest hint of some aliasing around the edges of some of the CGI animation. Colors look vibrant without being overly saturated and banding is not an issue.

The original Japanese-language stereo mix is the sole audio option. It is provided in DTS-HD Master Audio 2.0 and it very much a mixed bag. While the dialogue is clean and the stereo imaging is strong, the dynamic range is a little out of control, and by that I mean it goes from too low at times to staggeringly loud to the point of distorting during the action sequences. At least the cast does a good job with what is just an average series overall.

Only the clean opening and closing animations along with Sentai Filmworks trailers are included.

Undefeated Bahamut Chronicle is a mixed bag of quality and genres. The series suffers from not knowing what fans exactly it is aiming for, the fan service crowd, the mecha crowd, or the comedy crowd. The story tends to drift a little aimlessly and never really gets viewers invested in the characters. While it generally looks good, the sound is also hit or miss.

3 / 5 TheaterByte Rating
{{ reviewsOverall }} / 5 User Rating (0 votes)
TV-MA (VSD)TV Rating
LercheAnimation Studio
Sentai FilmworksDistributor
Ando MasaomiDirector
Kakihara YuukoWriter
300 Mins.Run Time
18 Apr. 2017Release Date
$59.98MSRP
1.78:1Aspect Ratio
AVC 1080pVideo
Japanese DTS-HD MA 2.0 StereoAudio
EnglishSubtitles
The Animation
The Story
The Video
The Audio
The Supplements
Summary
This fan service mecha series is a mixed bag that fails to deliver a compelling story because it cannot decide what fan base it is trying to target. The characters are not compelling and the story arc is somewhat muddled as well. Despite that, it does deliver on its strengths, those being excellent action sequences and sexy female character designs.
What people say... Login to rate
Order by: