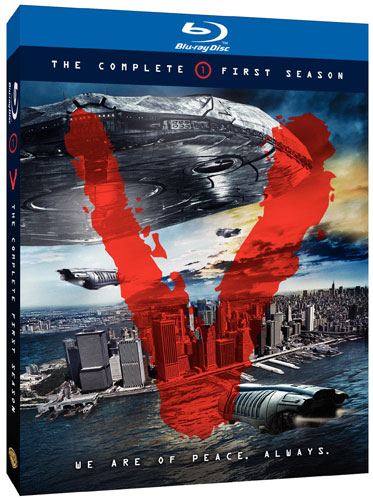 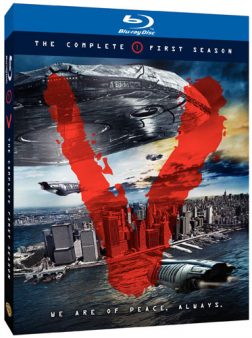 I was only 11-years-old when the original V miniseries ran in the 80’s, but I remember watching it and recall thinking how scary and creepy it was. Now, over 25 years later, seeing that original series, it admittedly looks a bit cheesy. What that old series still retains, however, is a lot of character. V returned to television in 2009 with this updated take on that original miniseries. Now, the visual effects look cinematic, the production values are sleek and glossy and it’s a solid science fiction series, but it lacks that “character” and inherent creepiness of the original miniseries and feels just bit generic in the end.

For those unfamiliar with the story, V is about an alien race called “the visitors” arriving on Earth, purporting to have friendly intentions. As their leader, Anna’s (Morena Baccarin), favorite phrase goes, “We are of peace. Always.” But slowly it is revealed that their intentions may not be so pure, and a group of underground anti-alien crusaders, known as the Fifth Column, fight to stop them.

The series is filled with post-9/11 paranoia and successfully blends together thoughts on religion, philosophy and science with top quality visual effects and a high level of writing across its intriguing 12-episodes.  V comes across more like The X-Files meets the short-lived series Invasion than it does a direct reworking of the original V miniseries. Despite the feeling that it’s missing something inherently unique, watching the series is still quite entertaining.

The glossy, high-tech production of V translates extremely well in this 1080p VC-1 encoding from Warner. The original digital, HD production is allowed to shine and is upgraded nicely over the 1080i broadcasts. Blacks and flesh tones are now more stable, macroblocking is gone and detail is far more extended. It’s a solid looking release overall.

V: The Complete First Season joins the long list of TV-on-BD titles from Warner crippled with DVD-quality audio. It comes with an English Dolby Digital 5.1 (448kbps) mix, so there is no upgrade over broadcasts of the series. High frequencies are a bit harsh and sound effects are hampered by an unrealistic edginess in the ambience. On the plus side, dialogue is clear and the use of the surround channels is pretty good for a television series.

Supplements are all in HD and offer a good amount of deleted scenes as well as interviews and behind-the-scenes featurettes.

V is a visually pleasing Blu-ray release that will certainly please most sci-fi fans. This remake of the 80’s cult favorite lacks the character of the original, but its production values and strong cast more than make up for that.