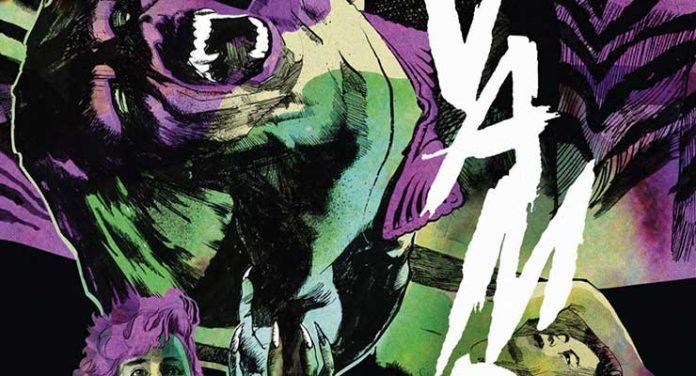 When two aspiring frat brothers decide they’re going to get in good with the frat they’re pledging to decide to go into town to fetch some strippers to get on the fraternity’s good side – all bets will be off. Vamp is the 1986 horror comedy starring Robert Rusler as AJ and Chris Makepeace as Keith. They’re not necessarily popular meatheads as they are best buds trying to find the path of least resistance. They want women, popularity, etc., but they need a car first. Enter the very resourceful Duncan (Gedde Watanabe) – he’s got a nice Cadillac and if the boys pretend to be his friend for week and take him into town then the car is theirs.

Once the gang makes it into town things start of on a weird not. The boys come across a gang of albinos that want to lay some pain down them. Their only sanctuary lies in the place they were initially going to hit up after getting into town: The After Dark Club. AJ, Keith, and Duncan take in the sights and sounds – Keith already getting a weird vibe until he reconnects with someone who seems to know him although he can’t place her. Allison (Deedee Pfeiffer) is the bubbly cocktail waitress who goes by stage name of “Amaretto.” She’s pretty and has a great attitude but Keith is quite clueless.

During the main performance piece – the androgynous Katrina (Grace Jones) makes her grand unveiling and obliterates the establishment with her eroticism. It’s soon discovered that she is an Egyptian vampire queen of sorts and that the After Dark club is her feeding ground and all the employees are her servants. They’re all vampires, ghouls, and zombies. As the action heats up the boys will have to use their collective resources to try and make it from dusk till dawn without being some undead creature’s dinner.

I think I was in the third grade and can vividly remember the scene featuring Robert Rusler and Grace Jones and it sort of freaked me out due to how graphic it was. This was also in the mid 80’s, and you couldn’t see ultra violence on network television like you could on VHS rentals. What brought Vamp out of relative semi-obscurity was that folks began to compare Robert Rodriguez’s From Dusk Till Dawn to the film. Everything in the club, Grace Jones being a vampire queen, etc., there’s all of that in FDTD – FDTD even has a song called After Dark presumably paying tribute to the club in Vamp.

Vamp is a cheesy romp of a horror-comedy ride and a clear product of the times. The special effects make-up work steals the show, as do our primary cast. This is the second version of the film on Blu-ray from Arrow Video – the first edition was released in 2011 in the UK and it was a fully loaded region locked edition. This new version has dropped a few supplements but is now region free a fit for American cinephile consumption. Vamp is a fun trip. 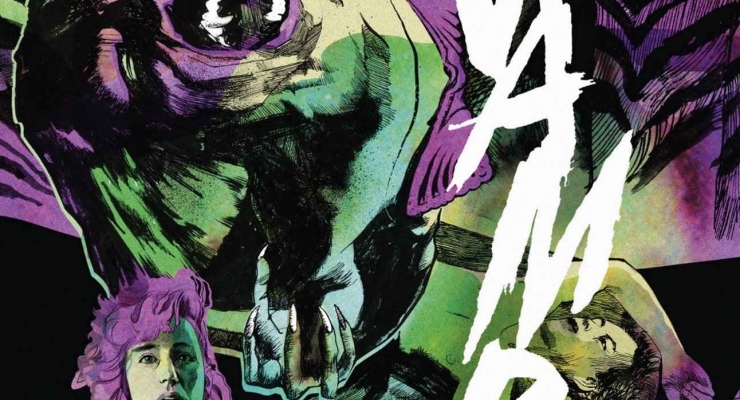 Vamp is presented in 1080p – 1.78:1. There are a few instances when the print gets soft but I lend that to the visual aesthetic. The film may take place in Kansas but it was all shot in Los Angeles. The color palette gets a bit wild once our heroes arrive at the club. Neon green and magenta highlights fill the screen while being obscured by a slight haze. I did not detect any intrusive noise or dirt. Flesh tones look great and only deteriorate when everyone turns full vampire or ghoul. This print also corrects the video glitch that was present in the UK edition – that one was a blink and miss moment, so your mileage will vary.

Vamp is presented in glorious 24-bit 1.0 monaural audio. Dialogue fares the best, as certain action scenes may come off as muddled. There is a lot of information going on in the center channel, so that’s not a surprise. I praise the studio for keeping the original audio track but wonder if a full 5.1 could have been done. Then again, the film is grounded in low budget routes and that may not have been a possibility since brand new sound effects would have to be created and that would ruin the original aesthetic.

Vamp carries over material from the UK release but drops several items. This new US version adds a brand new 45-minute documentary with everyone involved with the film – minus Grace Jones. It’s an often hilarious and fascinating look back at what went into making the film. DeeDee and Robert steal the show. The Blu-ray contains a blooper reel, short film, behind-the-scenes making of materials round out the package.

Vamp is cool ’80s fodder. If you missed out on the UK version from Arrow Video then getting this version should serve you will. It’s region-free. The video and audio look excellent and the brand new documentary for this release is hilarious and enlightening. Also, has anyone ever noticed that Robert Rusler sounds just like Robert Downey Jr.?

Vamp (TheaterByte Blu-ray Review)
3.5 / 5 TheaterByte Rating
{{ reviewsOverall }} / 5 User Rating (0 votes)
R (for violence, nudity, and alcohol use)Rating Certificate
Arrow VideoStudios & Distributors
Richard WenkDirector
Richard Wenk, Donald P. BorchersWriter
93 Mins.Run Time
$29.95MSRP
4 October 2016Release Date
1.78:1Aspect Ratio
AVC 1080pVideo
LPCM 1.0Audio
English SDHSubtitles
The Creative Content
The Video
The Audio
The Supplements
Summary
One can say that 10 years before From Dusk Till Dawn there was Vamp and they would certainly be spot-on in some respect. Vamp is a harmless blend of 80's comedy mixed in with some 80's vampire lore featuring a good-looking cast. This Arrow Films domestic release has less special features than the UK edition and the video/audio specifications are as good as can be.
What people say... Login to rate
Order by: