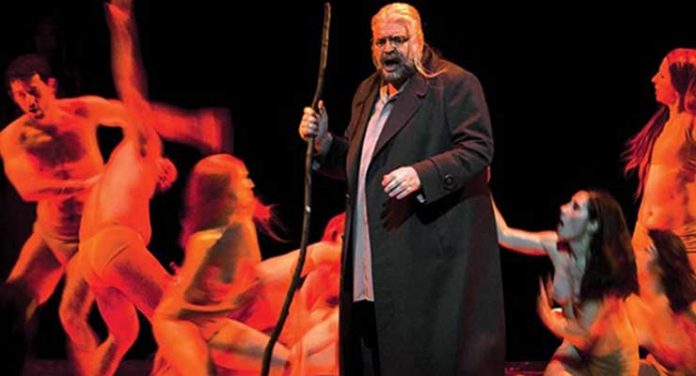 Tannhauser has now received a half-dozen Blu-ray productions and this is its second release with veteran heldentenor Peter Seiffert in the title role. With Der Fliegender Hollander (The Flying Dutchman) and Lohengrin this work completes the trio of Wagner’s so-called “romantic” operas that deal with love (spiritual and carnal), sin and redemption. Venerable maestro Daniel Barenboim leads the Staatskapelle Berlin and Staatsopernchor in a 2014 performance from Berlin’s Staatsoper im Schiller Theater. With the exception of the opening Paris Venusberg scene, this performance presents the original Dresden version. 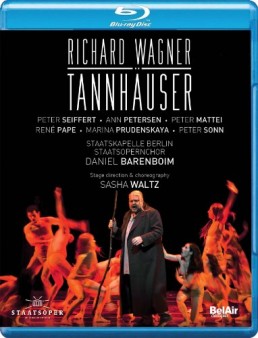 The minstrel Tannhauser has been living as a sex slave to Venus (Marina Prudenskaya) in her magic realm. He eventually breaks the goddess’s spell and on his return to Wartburg is reconnected with his friend Wolfram von Eschenbach (Peter Mattei) who is out hunting with Heinrich, Landgrave of Thuringia (Rene Pape), and nobles Walther von der Vogelweide (Peter Sonn), and Biterolf (Tobias Schabel). The Landrave’s niece Elizabeth (Ann Petersen) loves Tannhauser but to win her hand, he needs to win a song contest in which all songs must express the true essence of love. Things go terribly wrong when Tannhauser sings a hymn to the joys of the flesh that offends those in attendance. He is spared from death but the Landgrave banishes him until he makes a pilgrimage to Rome and receives the Pope’s forgiveness. Elizabeth waits patiently for Tannhauser’s return but as years go by, she gives up hope. Finally, Tannhauser returns bearing a staff that must sprout leaves for his soul to be saved. Elizabeth’s funeral cortege passes by, and as the minstrel lies dying, pilgrims appear and announce a miracle: the staff has bloomed and Tannhauser is redeemed.

This Tannhauser like a number of its Blu-ray predecessors receives a major makeover. Here, Bernd Skodzig’s costumes are quasi-20th century while Sasha Waltz’s stage is sparsely set and dimly lit. Waltz’s corps de ballet invades each act and, with the exception of the Venusberg scene, does not recall any Tannhauser that I have seen. Peter Seiffert delivers a heroic sing with sustained vocal power belying his 60 years. The other principal male roles of Wolfram and Heinrich are superbly rendered by baritone Mattei and bass Pape. The Russian mezzo Prudenskaya is a sexy-looking if dramatically a somewhat one-dimensional Venus. Danish soprano Petersen is more assertive than usual Elizabeth and, in so doing, becomes a real flesh and blood character. The real star of the show is conductor Barenboim who paces this lush score perfectly and, as is often the case, extracts orchestral details that are too often submerged by other batons.

Vincent Bataillon’s videographers were constantly challenged by David Finn’s lighting (or lack thereof) in each scene. Under such circumstances, the images and colors are often muted and details less than sharp. Camera coverage is excellent and well-balanced between close and distant shots.

The Schiller Theater has good acoustics and these are well served by the surround version. Both width and depth of the soundstage are close to what one would get in a premium seat.

BelAir Classiques offers only a program booklet with cast and production credits, track listing, a synopsis and some performance photos. 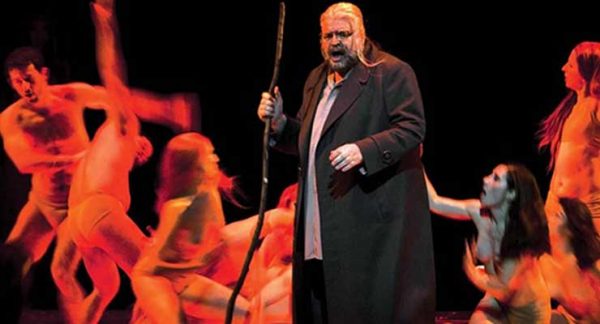 I am now accustomed to seeing my favorite Wagner opera reinvented by today’s stage directors, and, gratuitous choreography aside, the minimalism of this version is probably the least objectionable of the Blu-ray releases. With a cast as good as one is likely to get today and with leadership by one of the great Wagnerians of our time, it goes to the top of my Blu-ray Tannhauser list.