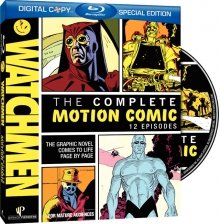 Alan Moore’s Watchmen series of graphic novels from the 1980’s along with Frank Miller’s The Dark Knight Returns is considered one of the seminal works of comics from that decade, helping to redefine the genre. In these days when the term “graphic novel” is thrown around so often, Watchmen still stands as an example of a work that truly deserves that moniker. Weaving together intricate story lines and multiple subplots, including the comic-within-a-comic Tales of the Black Freighter, Watchmen turned the world of “superheroes” inside out, bringing them down to Earth, and read like a combination beat novel and pulp fiction. 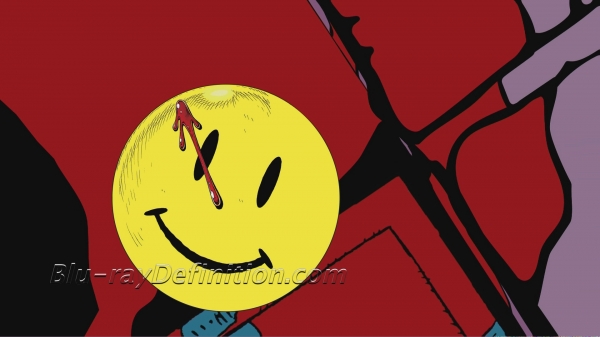 Following the travails of a group of costumed vigilantes that sprung up in the 1940’s and 1960’s in an alternate history United States on the brink of nuclear war with the Soviet Union, the 13-series comic focused more on everyday struggles and lives of the people behind the masks. The government has outlawed the costumed vigilantes and one of the vigilantes in particular, Rorshach, begins to investigate the death of one of the heroes, The Comedian/Edward Blake and uncovers a plot to kill off all masked vigilantes.

This Motion Comic from DC and Warner is an unusual adaptation of the series. Arriving just in time to coincide with the oft attempted and much delayed highly anticipated live-action film adaptation of Watchmen, The Complete Motion Comic, which was first made available on iTunes, seeks to capture the feel and spirit of the comics in an animated adaptation. Instead of doing a traditional animated series from the original graphic novels, however, what they have done, is taken the original art from Dave Gibbons and John Higgins and added very limited motion and narration, retained the dialogue bubbles, and added a touching, yet modernistic score and sound effects. The end result is a unique experience that feels more like cuddling up on a rainy day with a comic book rather than having someone’s idea of Watchmen force-fed to you in as animation. 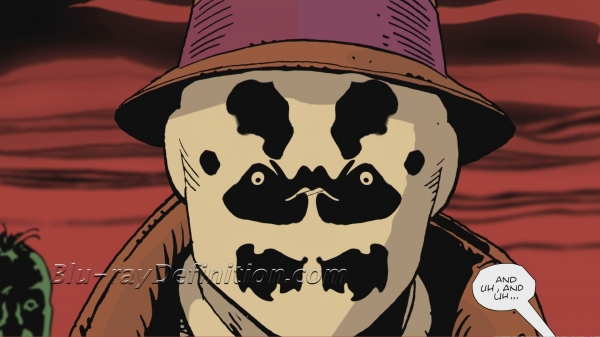 The Watchmen Complete Motion Comic Blu-ray comes in a brilliant 1.78:1 (mislabeled as 1.85:1) VC-1 1080p/24 encoding from Warner that is crisp, clean, sharp and detailed. It flawlessly captures the details of the line art and the shadings of the Watchmen comic, from the deep purples, mustard yellows, and browns. The textured look of Dr. Manhattan’s “H-bomb” skin even comes through with great detail, standing out against the otherwise flat textures. 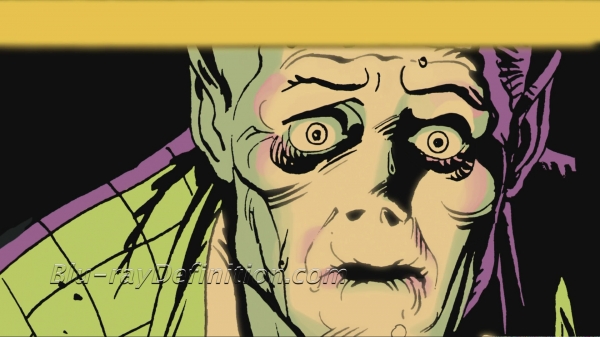 The Watchmen Motion Comic comes with English Dolby TrueHD and Dolby Digital 5.1 audio options. The disc’s lossless TrueHD soundtrack is exemplary. The mix is relaxed and effortless anchored by the thoughtful musical score by composer Lennie Moore. Ambient and subtle discrete surround effects encompass the listener in a constantly active mix, from the sounds of a rainstorm, to footsteps running down an alleyway or the click of a cigarette lighter.  The dialogue is clean, full and easy to follow. 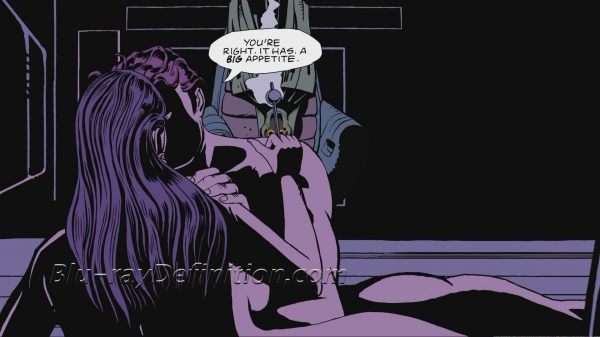 This release is unfortunately light on the supplements. There is a sneak peek at the Wonder Woman Blu-ray release and a brief talk with Watchmen creator Dave Gibbons entitled Watchmen Production Diaries #4 (1.78:1/HD) in which he discusses how faithful to his graphic novel the Watchmen film is. Apart from that there is a BD-Live feature that offers nothing more than a trailer for the Watchmen film.

The release does also come with a bonus disc that offers access to a digital copy of the series that can be downloaded to a PC or Windows Media Compatible portable device and a $7.50 coupon to see the Watchmen motion picture in theatres (expires 28 March 2009) 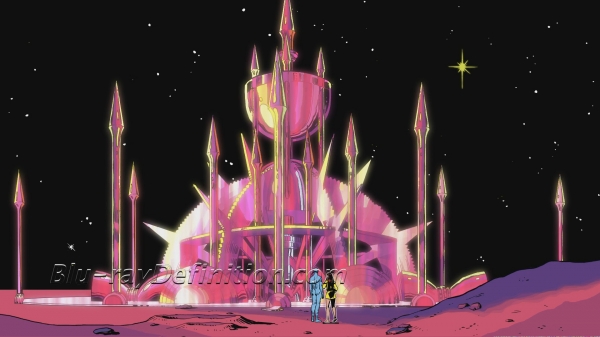 DC continues to take the lead in bringing their comics to Blu-ray Disc, pulling miles ahead of rival Marvel, and Watchmen: The Complete Motion Comic just adds to their distance. Warner has done an exceptional job bringing this classic graphic novel to Blu-ray with reference quality picture and sound. I have no trouble recommending this to anyone who is a fan of comic books, animation, or just good stories.