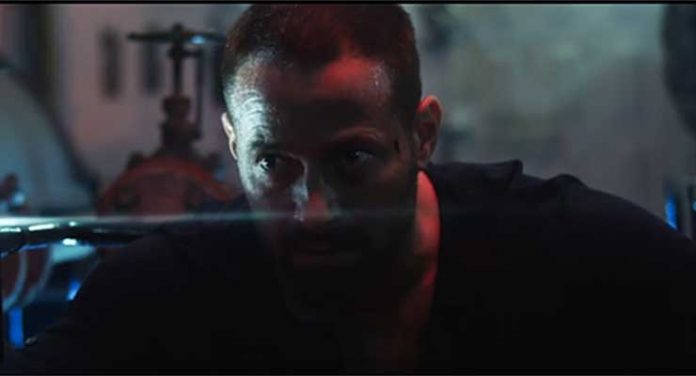 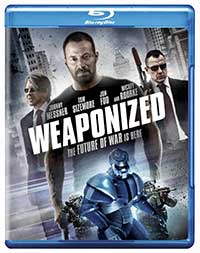 Weaponized is ostensibly an intellectual sci-fi action drama set in the very near future of 2018, and with a cast that includes Tom Sizemore and Mickey Rourke, one would have thought it would be good. It isn’t. Actor/Director Timothy Woodward, Jr. who also plays a small part in the film, presides over a production that comes across like a bad made-for-TV B-movie from the old Sci-Fi TV days, before their recent reboot to more quality series.

The plot revolves around a terrorist attack on the pentagon, the worst since 9/11, that starts a new era of the second war on terror, and Kyle Norris (Sizemore), from military contractor Blacksun, down the road to finding a new super-weapon to combating terrorists. That weapon turns out to be some form of mind control technology that leads to an Iraq war veteran killing a number of people in a hotel lobby, which gets Detective Walker (Johnny Messner) on the case. The investigation leads him to eccentric, toy breed dog carrying Professor Clarence Peterson (Rourke) and a secret study at Blacksun. Walker soon finds his own family’s life in danger and is in a fight to shut down this clandestine, out of control government program.

Where to begin…there are so many plot holes in Weaponized, the film is hard to even follow. When we get to the final act, the super-weapon that Detective Walker thought he uncovered doesn’t even turn out to be what it was, exactly. It’s three different things. One of them a giant, seemingly unstoppable, humanoid mecha robot; you, know, just because. That doesn’t even take into account how bad the acting is. It’s like these usually good actors are reading from cue cards and really hamming it up while they’re doing it. The worst acting performance comes straight from director Woodward himself. This is just not a good film.

We get a good transfer of Weaponized to Blu-ray in an AVC 1080p encodement, albeit one that does not necessarily look all that filmic, but given the low budget of the production it’s about as good as one could ask for. There isn’t any excessive video noise and contrast is pretty good.

The audio, offered up in DTS-HD Master Audio 5.1, is your basic 5.1 mix. There are some sound effects spread across the front channels, a bit of an annoying, tech sounding film score, and lots of atmospherics. The dialogue is clean with only the slightest hint of some clipping in the loudest passages.

Not much is provided here.

In a world where there is so much great sci-fi and fantasy to be had, this entry is one that can definitely be passed over. The Blu-ray is just okay, but, really, that’s not a good enough reason to sit through this.