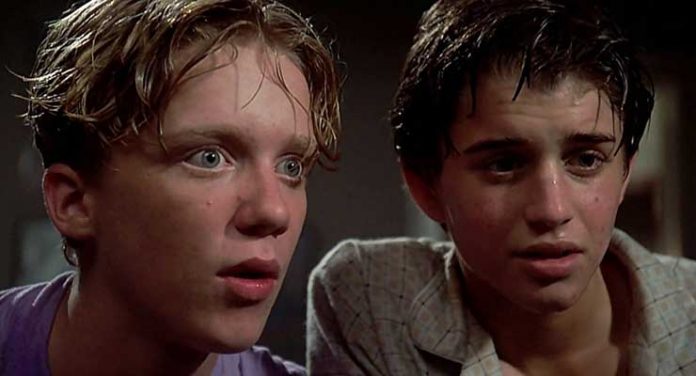 Weird Science was kind of an anomaly in John Hughes output. Up to that point he had directed two films exploring the awkward teen years, relationships, and the pressures of high school Sixteen Candles and the thoughtful The Breakfast Club. Both of them were rather well grounded in reality, but for this third film he took a bit of a turn into the absurd. He remained with the teen genre, but decided to make it a little crazier, just a bit edgier, and bring in elements of sci-fi and the then cutting-edge computer technology into the story.

Two nerdy high school friends Gary (Anthony Michael Hall) and Wyatt (Ilan Mitchell-Smith) who can’t make friends or get a girlfriend decide to use their PC to create the perfect woman to their exact specifications. Out steps the gorgeous Lisa (Kelly Lebrock), who then takes them on a wild journey outside of their shells to find themselves, including to a smoky adult bar, and throwing a crazy party at Wyatt’s house where Mad Max characters literally show up.

Weird Science goes from the crazy to the insane and makes no excuses about it. There’s much that takes place in this 1985 film that probably would never get made today. The idea of two guys just making a woman to be their sex doll sounds creepy enough, but then you also have the scene with Anthony Michael Hall talking “black” in the dive bar. Was it funny? Yes. Would it get past the PC police today? Probably not. We also have to look at the film in a broader context. Kelly Lebrock’s role was as a ‘sex goddess’ created by two creepy nerds – who also happened to be underage and she was meant to be in her twenties at the time. Also, Lisa encourages the boys to expand their horizons, so the strange premise that draws us into the film is really a misdirection. She ends up being their mentor rather than their sex slave.

Hughes’ film is action packed from beginning to end and filled with memorable moments and classic one-liners. Who can forget Wyatt and Gary with the bras on their heads? Or the classic “gimme da’ keys” line? The cast is perfect as well. The late Bill Paxton as the terrifying older brother Chet has to be one of the most memorable characters from the 1980s. Robert Downey, Jr. also appears and plays a marvelously hateable high school in-crowd cool guy. 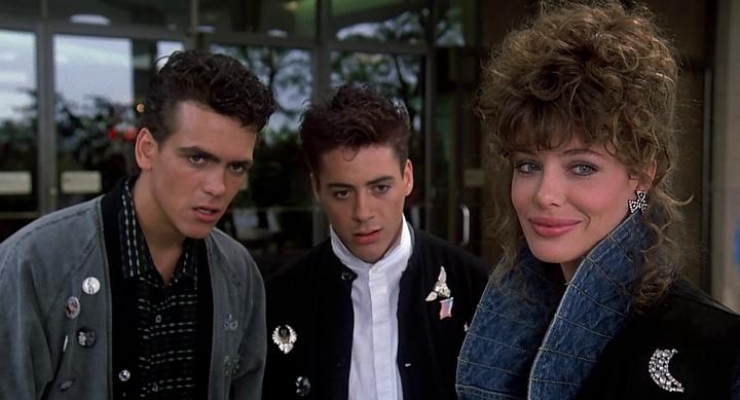 This new restoration of Weird Science from a 4K scan of the original camera negative arrives on Blu-ray in an AVC 1080p encodement framed at 1.85:1. The image looks absolutely gorgeous. I don’t believe I have ever seen this film look so good. I never actually got to see this in theaters back in the eighties, only on HBO on my family’s old 19” CRT television when it finally hit there and eventually on VHS and DVD. This new reissue looks so filmic and authentic, clean, but also preserves all the film grain and keeps the image crisp and detailed, with rich color and excellent dynamic range.

Arrow provides two options for Weird Science – a stereo mix in DTS-HD Master Audio 2.0 and a 5.1 remix in DTS-HD Master Audio that’s only available with the original Theatrical Version of the film. The 5.1 mix is surprisingly good, with sound balanced well through the channels, lush atmospherics and good solid effects that make their way into the surround channels. Low end and midrange are nicely punchy and dialogue comes through clearly. The stereo audio is also good with a good spread of sound and dynamics, although the high end is just a little bit grating.

Weird Science is packed to the brim with bonus materials including lots of new interviews that provide a great amount of insight into the film.

This is one of the classic teen films from the 1980s. People seem to love it or hate it – put me in the former category. It’s not one of Hughes’ more thoughtful films, but it wasn’t meant to be. Arrow’s Blu-ray release is fantastic. The film looks superb and the set is loaded with top-notch bonus features.

4.4 / 5 TheaterByte Rating
{{ reviewsOverall }} / 5 User Rating (0 votes)
PG-13Rating Certificate
Universal Pictures | Arrow VideoStudios & Distributors
John HughesDirector
John HughesWriter
94 Mins.Run Time
$39.95MSRP
23 July 2019Release Date
1.85:1Aspect Ratio
AVC 1080pVideo
English DTS-HD MA 5.1Audio
English SDHSubtitles
English DTS-HD MA 2.0 StereoSecondary Audio
The Creative Content
The Video
The Audio
The Supplements
Summary
Two high school nerds who can't make friends or get girlfriends to use a PC to literally create the perfect woman, but she ends up disrupting their lives, teaching them about themselves, and bringing them out of their shells. Weird Science is a hilarious and irreverent 1980s teen comedy that is very different from the rest of writer/director John Hughes' other output but is filled with classic one-liners and memorable moments. The film's cast features a number of young stars who would go on to bigger things including Anthony Michael Hall and Robert Downey, Jr. Kelly LeBrock stars as the perfect woman Lisa. Arrow Video brings the movie to Blu-ray in a gorgeous new restoration stuffed with bonus content.
What people say... Login to rate
Order by: