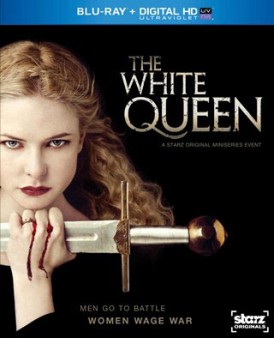 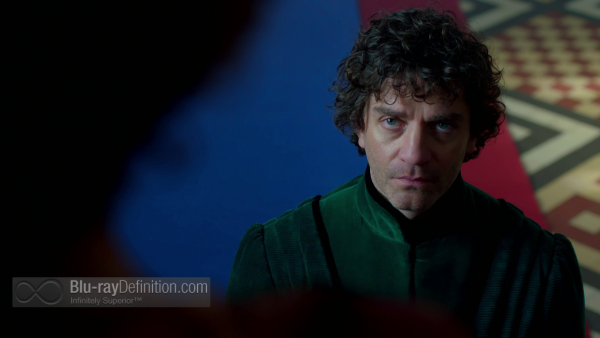 With the popularity of HBO’s fantasy series Game of Thrones, what better way for Starz to respond than with their own mini-series based on the actual historical events that inspired the works of George R.R. Martin? The White Queen is based on author Phillipa Gregory’s The Cousins’ War series of novels (The White Queen, The Red Queen, and The King Maker’s Daughter), which are about Britain’s 15th century civil war, the Wars of the Roses, between the Lancastrians and the Yorkists. What Gregory’s story does differently, and what most historical accounts fail to do, is give us an account of events from the perspective of the female figures from the period.

Although Gregory and the series’ producers do their best to claim The White Queen as an accurate depiction of this period in British history, one shouldn’t go into viewing expecting historical accuracy. Gregory’s novels and the series’ adaptation by writers Emma Frost, Lisa McGee, and Nicole Taylor deal in lot of pure fiction and fantasy here. This is a series rife with anachronisms, witchcraft, and speculation. Most notably – and notoriously – is the convoluted conspiracy surrounding the murder of the Princes in the Tower, a long-running historical mystery that conspiracy theorists love to speculate on.

The 10-episode arc weaves together seamlessly the three Gregory novels, beginning with the secret marriage of the Yorkist King Edward IV (Max Irons) to the commoner Elizabeth Woodville (Rebecca Ferguson). It’s an event that sets up a battle amongst the women of the court to ascend to the throne as Queen of England, or maintain their position, as it might be. “The White Queen” Elizabeth; the “kingmaker’s daughter” Anne Neville (Faye Marsay), daughter of ruthless ally to King Edward, Lord Warwick, “the kingmaker” (James Frain); and the “red queen” Lady Margaret Beaufort (Amanda Hale) who has a singleminded determination to place her own young son, Henry Tudor (Michael Marcus) on the throne begin their machinations – whatever it takes to secure power – sex, murder, money. Meanwhile, his marriage to Elizabeth has caused Edward to lose more allies than he bargained for and he finds himself at odds with his longtime family ally Warwick, and his own brother.

Despite the series’ penchant for manipulating viewers with fanciful stories of witchcraft with Elizabeth and her mother Jacquetta Woodville (Janet McTeer, who, by the way, steals practically every scene she’s in), or the capricious and opportunistic Lord Stanley (Rupert Graves), The White Queen does manage to squeeze in some historical facts. The brief reign of Richard III (Aneurin Barnard), the aforementioned Princes in the Tower, and the eventual invasion of Henry Tudor at Stoke to end the Wars of the Roses get covered.

Mostly, however, The White Queen does play as a less involving, somewhat timid version of Game of Thrones, despite being based in fact. There are plenty of steamy sex scenes (the US version of Starz is actually racier than the UK counterpart in this respect), but even here it is more overblown than shocking and downright dirty. It’s also rather unfortunate that the casting department couldn’t find an Edward IV with more presence than Max Irons who maybe has the looks that modern audiences will love, but has the gravitas of a mug of warm milk. Rebecca Ferguson may be the most perfectly cast given her stunning beauty to be the woman at the center of an ongoing war, yet the perfection, pearly white teeth and, well, completely hairless body of her and the other actors makes it all too Madison Avenue, and much less 15th century.

Despite whatever flaws creep in, The White Queen still manages to be entertaining in a guilty pleasure sort of way. Furthermore it is an empowering mini-series for young women to see the often forgotten females of a bygone era brought to the fore. It isn’t unfounded speculation to say that many women in the past centuries have been the major influencing voice behind powerful men. In The White Queen, these women drive the story and it is a refreshing approach, one we will hopefully see more of. 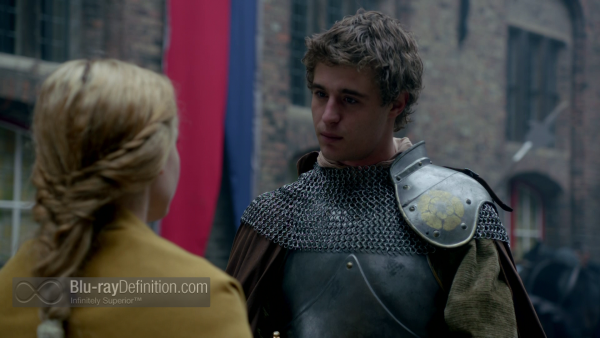 As is the standard now, this BBC production was done in high definition, and while it is a step above its US broadcasts (I can’t comment on how it looked in the UK), this AVC/MPEG-4 1080p transfer from Anchor Bay fails to rid itself of some the murkiness in the imagery that is there in the shadows. It tends to look soft and full of video noise, with darker colors just a bit prone to crushing. There is also some slight color banding in flat colors and the slightest bit of posterization that can be spotted. Contrast could be a little better as well. 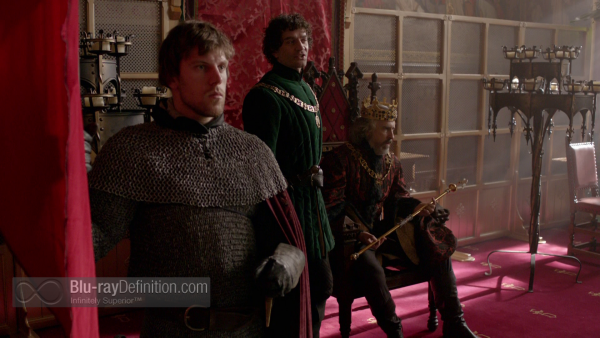 The English Dolby TrueHD 5.1 (48kHz/24-bit) soundtrack really fails to take advantage of all of the channels and doesn’t  place us in the middle of the action. Atmospherics are quite subtle and battle sequences lack the full impact of strong discrete sound effects throughout the soundstage. That said, the dialogue is clear and the score sounds splendidly airy and balanced in the mixed. 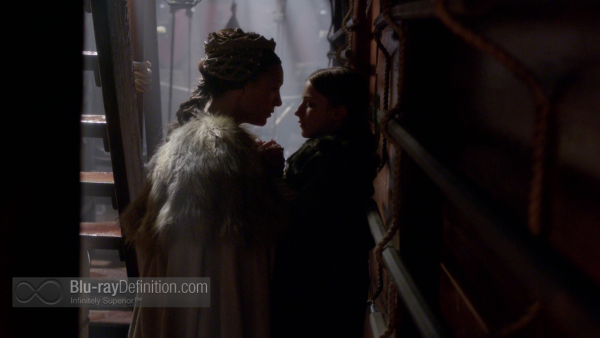 All of the on-disc extras here have titles like they are going to offer lots of insight into the series and the turbulent period in British history that it depicts; sadly they just play like press kit featurettes barely scratching the surface of the history of the Wars of the Roses. Also, much of seems to be trying to justify the historical “accuracy” of author Phillippa Gregory’s work and this particular adaptation as well. 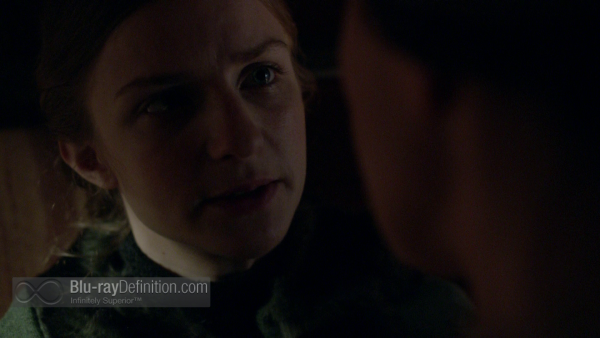 Starz is reportedly working on a follow-up to The White Queen, The White Princess, based on the book from Phillippa Gregory. Whether that series will have the same level of success or finally rise to the same level of Game of Thrones is to be seen. In the meantime, this mini-series is pleasurable even if it has certain flaws and an unsatisfying ending. 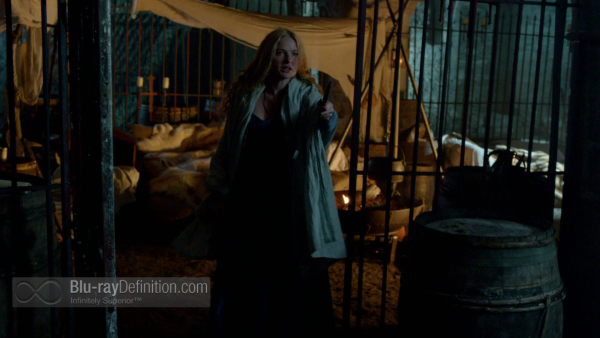 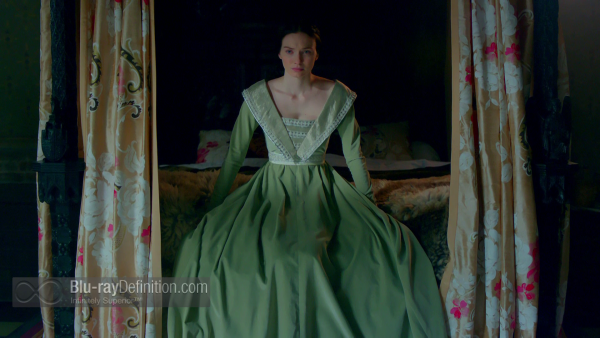 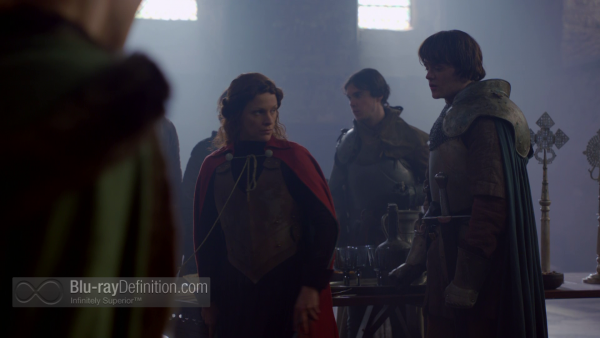 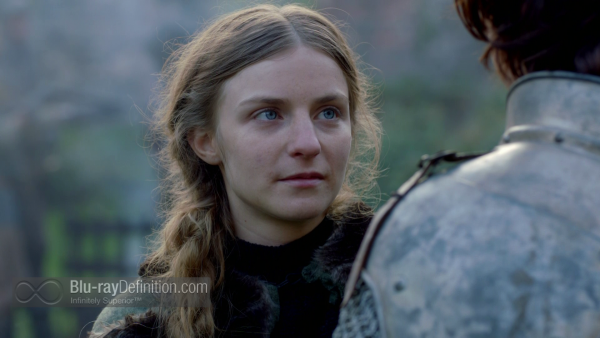 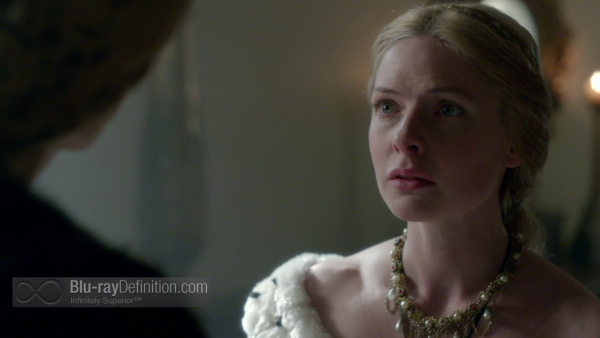 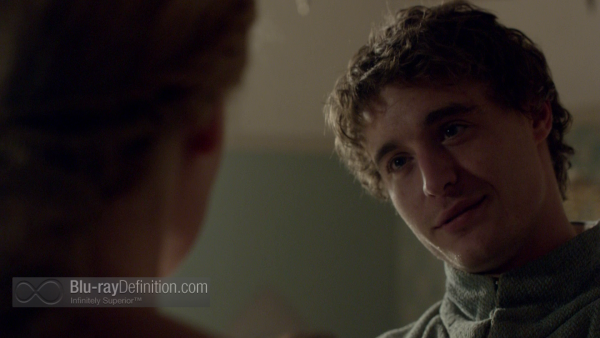 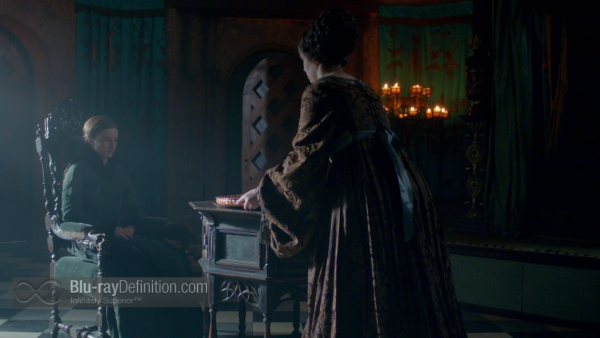 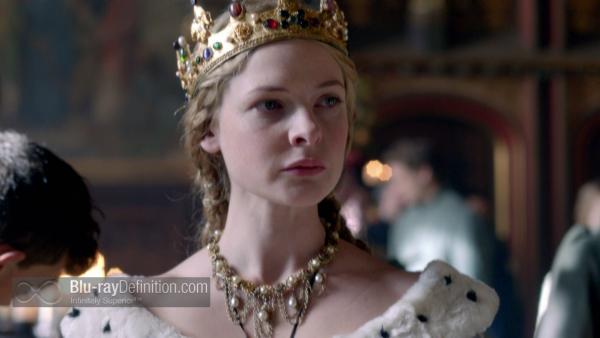 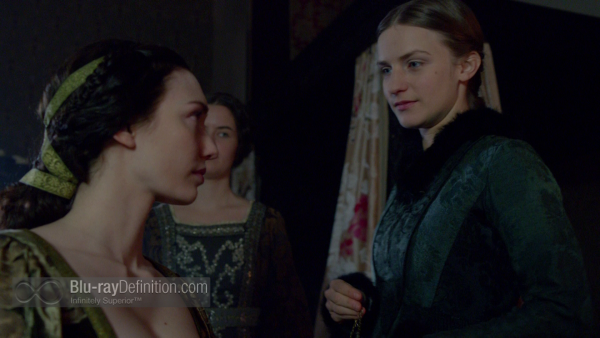 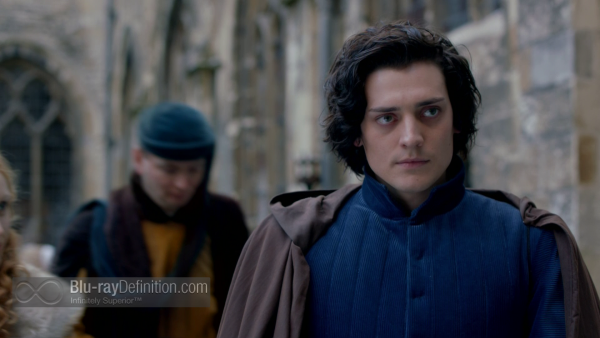 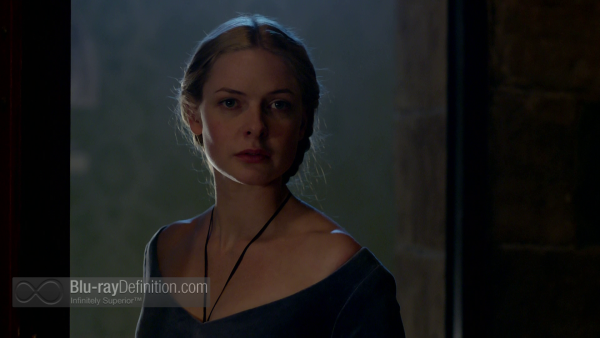 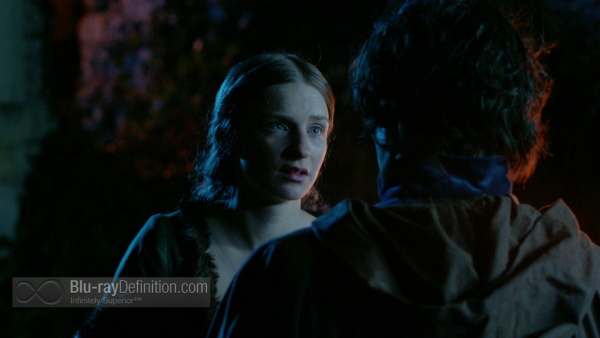 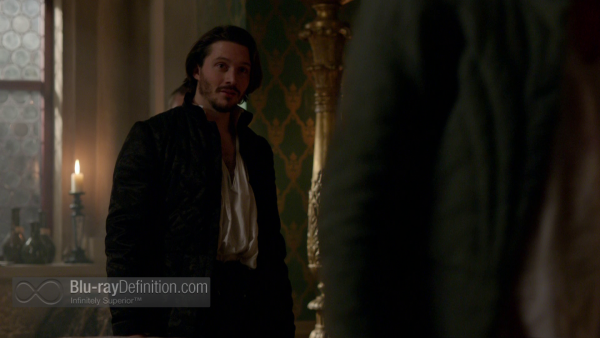 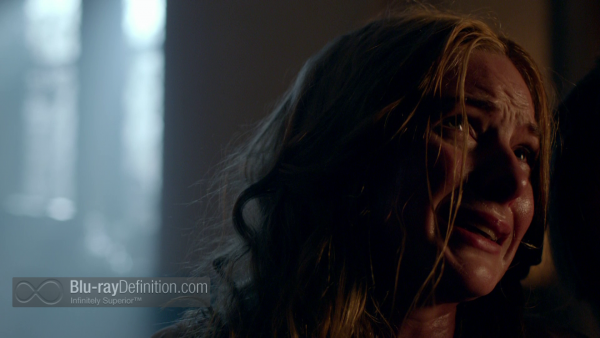 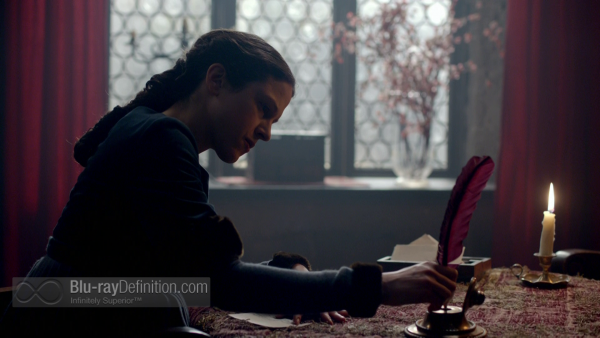 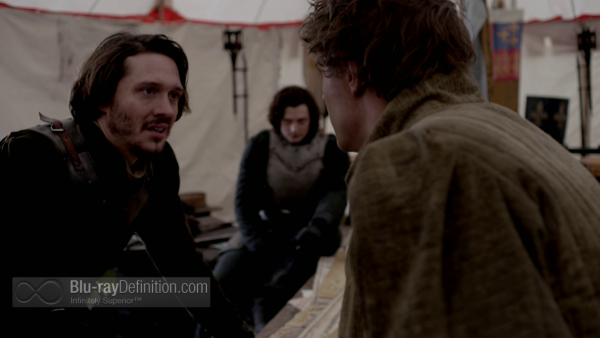 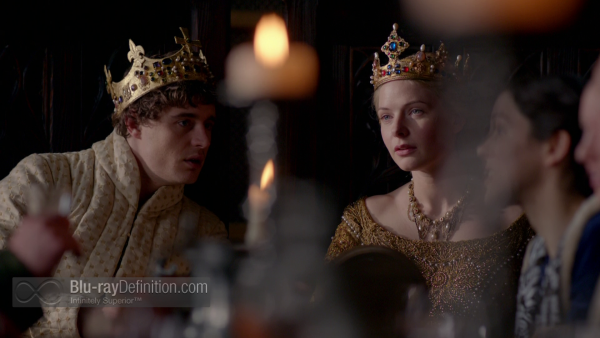 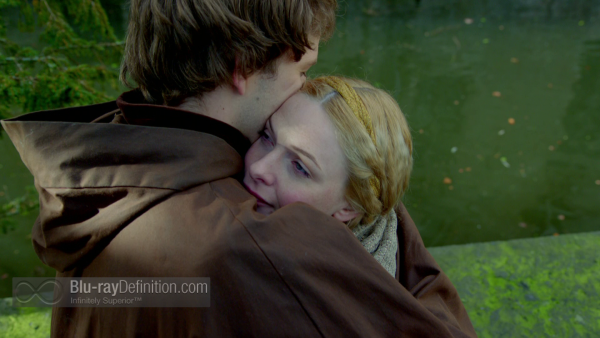 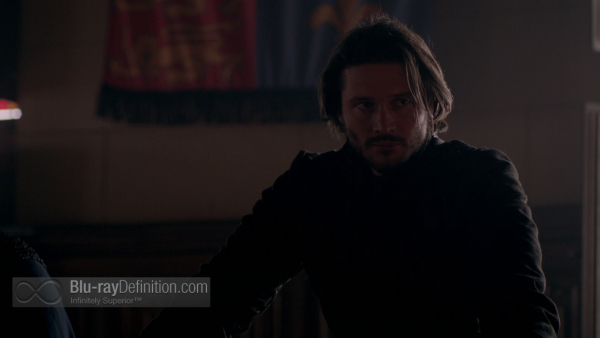