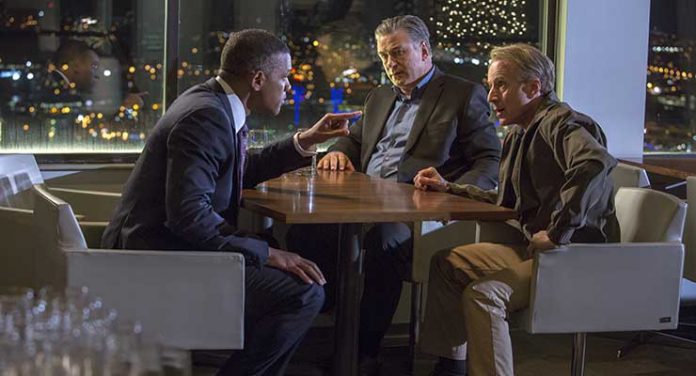 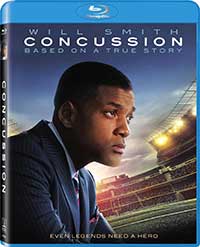 Concussion is the 2015 sports drama based on a true story starring Will Smith that tells of one doctor’s, Dr. Bennet Omalu’s (portrayed by Smith) fight to bring a serious condition caused by playing American football to the attention of the public and the National Football League (NFL).

Omalu makes a shocking discovery after his autopsy and studies of Webster’s brain. Webster’s brain has suffered serious trauma, and Omalu, after studying the sport of which he knew nothing about, links it to the many blows to the head and concussions that Webster suffered during his time as a center for the Steelers. After several other retired NFL players die under tragic circumstances, Bennet conducts further autopsies that links their troubles (usually presenting as severe mental illness, Alzheimer’s, and violent rages) to what he now calls CTE or Chronic Traumatic Encephalopathy. When Bennet publishes his findings, now backed by former NFL doctor Julian Bailes (Alec Baldwin), a name that appeared on many of the players’ medical records, he finds himself under fire from the NFL and the government, being labeled a “quack” and being threatened with deportation.

Much hullabaloo was made over the lack of an Oscar nomination for Will Smith’s portrayal of the real-life Dr. Bennet for multiple reasons, not the least of which was this year’s ceremony failing to have any actors of color nominated. Frankly, while Smith did a decent job in Concussion, his performance was not worthy of a Best Actor nod. Firstly, his portrayal of the Nigerian native, while one of the strongest dramatic roles of his illustrious career, is not without its flaws. His accent goes in and out very often, and it is probably the weakest and most obvious aspect of his performance, one I cannot overlook. On all other points, however, Smith is in prime form, offering a nuanced, often intense and impassioned performance of a man willing to risk everything to simply, as one of the most famous lines from the film puts it “tell the truth.”

But Concussion is too much a film solely about the drive of one man and one man alone. Dr. Bennet, as performed by Smith, is a towering figure in the film, and, even with that being the case, we are hardly given a chance to get beyond the exterior of his reported genius and to explore his domestic life (he as a beautiful girlfriend and eventual wife who is foisted on him by his church in the form of the lovely actress Gugu Mbatha-Raw, and he has at least one superior, Dr. Cyril Wecht (Albert Brooks) willing to stick his neck out for him because he really likes him and thinks he’s a genius. We don’t really get to learn why, though. The surrounding characters may as well be window dressing. Albert Brooks and Alec Baldwin are both woefully underused and don’t bring much at all to the film, though they both do as much as they can with the parts they are given.

Concussion exists too much in the realm of righteous indignation and that feeling of being told that all the people here are doing the right thing just because they are so good, you know, sanctimony to be exact. It succeeds in getting that point across and hitting those notes and of waxing poetic of what a beautiful art form the very game, football, it has spent over an hour warning us is a horrible health threat is. It is both confused, and artfully powerful in too exacting a way to be a great sports drama, but it isn’t all bad either.

Concussion was shot digitally on the Arri Alexa XT Plus at 3.4K resolution and processed with a 2K DI. It comes

to Blu-ray Disc in a 1080p AVC transfer that looks clean and detailed, yet still has a relatively cinematic, filmic quality to it. Many of the indoor scenes are shadowy and lean toward cooler shades, but there are no problems with crush, noise, or banding. Outdoor scenes brighten up a bit and show a little more “pop” in the primaries as well.

We get a pretty atmospheric and well-balanced English DTS-HD Master Audio 5.1 soundtrack for Concussion on Blu-ray. This isn’t a film with lots of explosions and sound effects, naturally, so it tends to be a little front-heavy, but the dialogue comes through with a full and natural presence as does the score which fills the channels smoothly and lushly without drowning out the dialogue. Low end is there and extends a bit, especially when the snippets of football field clashes are presented. It doesn’t ever become bombastic, but we get a good sense of a solid foundation underpinning the hits.

The feature-length audio commentary from director Peter Landesman is the only extra on disc worth going through on this release. Everything else has sort of an EPK-type feel to it and the deleted scenes don’s add very much at all.

Concussion ultimately suffers from the flaws that so many biopics and “based on true story” films suffer from, and that is the “feel good” syndrome of making its central characters seem too heroic, and of offering up a one-dimensional story that talks down to the audience, and not letting the audience in to the lives of the characters being portrayed and the story being told. While Will Smith puts on a solid dramatic performance, issues with his accent aside, this film in time may lose its sheen once the power of its important message and all other controversies wither with time.

Concussion (TheaterByte Blu-ray Review)
3.8 / 5 TheaterByte Rating
{{ reviewsOverall }} / 5 User Rating (0 votes)
PG-13 (for thematic material including some disturbing images, and language)Rating Certificate
Sony Pictures Home EntertainmentStudios & Distributors
Peter LandesmanDirector
Peter Landesman, Jeanne Marie Laskas (Based on the GQ articleWriter
123 Mins.Run Time
$34.99MSRP
29 March 2016Release Date
2.39:1Aspect Ratio
AVC 1080pVideo
English DTS-HD MA 5.1Audio
The Creative Content
The Video
The Audio
The Supplements
Summary
Concussion is ultimately an average sports drama that could use a trip back to the editing block and a beefed up script to expand the roles of the supporting characters. Will Smith has one of his best dramatic roles, although lapses in his accent creep in.
What people say... Login to rate
Order by: