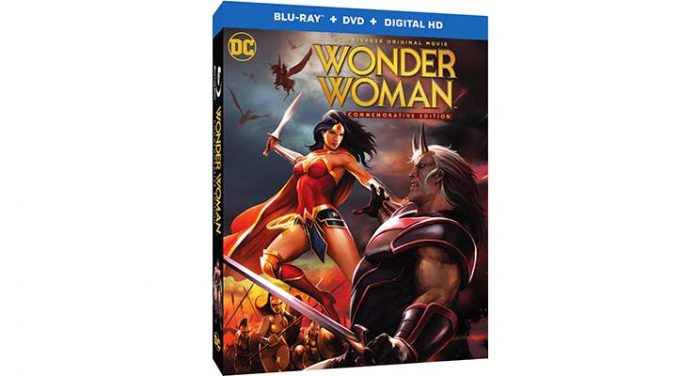 DC Comics and Warner Bros. Animation cash in on the anniversary of the iconic feminist icon, superhero, and coming live action film of the same by reissuing this 2009 direct-to-video original feature from the DC Universe Original Movie series.

Wonder Woman tells the original story of the superhero/goddess. Created out of clay by her mother and hidden away from the world of men on the island of Themyscira for centuries, Diana (voiced by Kerri Russell), princess of the Amazons has grown into a fierce and beautiful warrior. When the U.S. fighter pilot Steve Trevor (Nathan Fillion) crash-lands on the island, Diana defies her mother, the queen of the Amazons, and secretly competes in a contest to determine who amongst the Amazons will accompany Steve back to the land of men. Of course, Diana wins the contest and now, under Amazon law, must accompany Steve back. Meanwhile, Ares, god of war (voiced by Alfred Molina), a prisoner of the Amazons stripped of his powers for centuries, has seduced one the Amazon sisters, escaped into the world of men, and hatched a plan to bring death and mayhem to the world. Diana’s objective is now no longer solely to accompany Steve back, but also to become an emissary building a bridge between the chaotic world of men and Amazons, and to find and deafeat Ares to save the world. She must become a beacon of hope, a Wonder Woman.

The film stays true to the basics of the origin story of Wonder Woman, which hasn’t really changed over the decades, and Keri Russell does an exceptional vocal performance, both strong and heartfelt when need be. Nathan Fillion pulls out his “Captain Malcolm ‘Mal’ Reynolds” swagger to voice a solid performance as Steve Trevor. The animation is also up to snuff, looking typical of the DC Animation style with enough detail and tradition in Wonder Woman’s uniform, while the action sequences really do give that edge-of-the-seat appeal. Overall, this is one of the better direct-to-video DC releases from the studio. 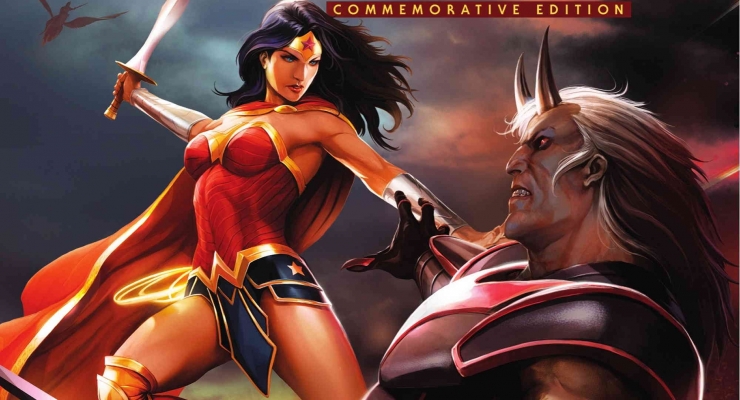 This 2009 digitally animated production from Warner Bros. Animation hails from the days of the format war between Blu-ray and they long dead HD DVD format. It was also a time when Warner used to release on both formats, preferring to first master to HD DVD, using that format’s preferred VC-1 codec and then port it over to Blu-ray. This “new” commemorative edition uses that same transfer from 2009 and it was not exactly a good one. I can see a lot of color banding, even some spotty posterization. To really celebrate 75 years of Wonder Woman and this quite fine original film it would be great to see this restored, if possible.

At least the English DTS-HD Master Audio 5.1 soundtrack is well done. It has very good balance, tonality, and excellent use of the surround channels for discrete effects. The low end is deep, though not extended down to the depths like a big action feature might be. Dialogue comes through full and clean.

There’s an excellent collection of featurettes included that document the history of Wonder Woman in the comics and on film, going all the way back to her original creation by psychologist and feminist William Moulton Marston. Many of the artists and writers who have worked on the iconic heroine over the years chime in with interviews and her place in the world of both popular and political culture is explored.

A solid Wonder Woman release to gear up for what many are no doubt hoping will be a defining live action film, this commemorative edition is disappointing in its video quality, but spot on with everything else.