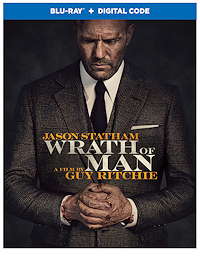 Guy Ritchie’s latest film Wrath of Man is an action heist thriller based on the 2004 French film titled Le Convoyeur or “Cash Truck.” Jason Statham plays a man named H with a dark and mysterious background who takes a job working for an armored truck company ferrying around millions of dollars in cash every day. The company has only recently lost two of their guards to an armed robbery, so nerves are on edge and suspicions are high. In typical Ritchie fashion, the film unfolds in an nonlinear fashion, often jumping around the timeline to show us various points in the story arc before during and after pivotal plot points occur. It isn’t long before we realize H is more than just some average workaday security guard as he helps foil another robbery attempt on the company’s truck during one of his delivery rounds taking down six men singlehandedly with brutal combat and precision shooting. Soon a secondary plot of revenge involving numerous characters unfolds and the story becomes more complex.

There are no wasted moments in Wrath of Man, it is at the tipping point of vengeance from beginning to end and takes various twists that keep it entertaining. While Ritchie does ask viewers to suspend disbelief a bit too much at times, such as certain characters being shot at point blank range with armor piercing bullets and surviving, the flaws are easily overlooked when you’re on this thrill ride.

Wrath of Man was shot on a Sony CineAlta Venice with Panavision Primo Artiste lenses in 6K and uses a 4K DI. The digital release of the film is available in 4K with Dolby Vision, but on disc we only get a Blu-ray, encoded in AVC 1080p framed at 2.39:1. There is a definite “filmic” appearance to this movie, either through post-processing addition of a grain effect or in-camera settings to allow for a more organic appearance. This doesn’t have the sort of clean look one is used to with many digital productions. That said, it looks good, it’s free from banding, and we get a lot of detail. You can see every drop of blood rolling down Statham’s face in the big heist scene. Contrast is good and there aren’t any issues with crush. I do miss some of the extra ‘pop’ in the specular highlights one can see in the Dolby Vision version, such as in the nighttime shots of the city skyline, but otherwise this is satisfying.

There is one audio mix provided and it’s an English DTS-HD Master Audio 5.1 mix. It’s good, but not the best I have heard. The sounds are a bit stagnant, but everything comes through clearly with wide dynamics and low end that gives decent rumble, but not ground shaking. There’s enough there to give the truck engines good ‘roar’ and supply gunshots with some impact. The high frequencies are also well balanced so none of the constant barrage of bullets becomes fatiguing.

There are zero bonus features on this release, but Warner Bros. does include a Digital Copy code.

Load more
Wrath of Man (Blu-ray Review)A mysterious man named H (Jason Statham) gets hired as a security guard at an armored truck company to help ferry around millions of dollars in cash every day and they soon become the target of armed robbers as another subplot of revenge is revealed in this multilayered crime thriller that unfolds nonlinearly from writer/director Guy Ritchie.