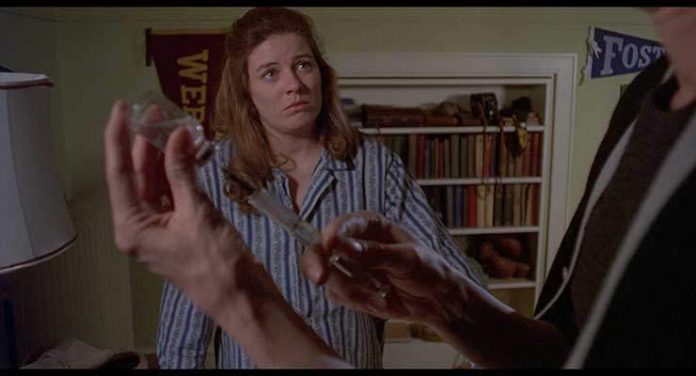 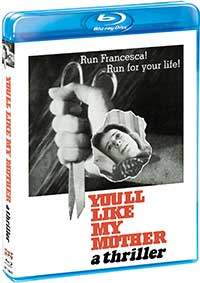 As far as thrillers go, 1972’s You’ll Like My Mother with its on the nose title and less than big screen production seems rather forgettable. However, this nail-biter has more than enough chills to keep genre buffs entertained, and the big name cast starring Patty Duke, Rosemary Murphy, Rob Thomas, and Sian Barbara Allen help keep director Lamont Johnson’s TV movie talents afloat.

(Murphy) in a snowy Minnesota, after having heard so many positive things from her late husband about his mother. When she arrives, however, Francesca finds a woman who is icy cold toward her, refusing to accept her as her son’s wife, and mentally challenged sister-in-law Kelly (Allen) that her mother-in-law abuses. In fact, there are secrets here, dangerous ones, including a psychotic brother-in-law Kenny (Thomas). Francesca wants nothing more but to get away, but she’s trapped. A blizzard has left her snowed in, and the reality comes to light. The woman she arrived to isn’t her late husband’s mother at all, but in fact a greedy aunt who wants to inherit her dead mother-in-law’s fortune.

While You’ll Like My Mother seems to drift between the absurd and the truly bone chilling, overall it is a good little ‘70s thriller that, by today’s standards may not push the boundaries of what is considered scary, but is worth it for its more atmospheric moments and the strengths of its lead actors’ performances.

You’ll Like My Mother is a 1972 film shot on 35mm and as such it wouldn’t be expected to look pristine, that said this Scream Factory release, framed at 1.85:1 and encoded in AVC 1080p on Blu-ray looks deliciously organic and filmic, with a sharp, crisp layer of natural looking grain and spot on flesh tones. Where it fails a bit is in the black levels that definitely crush, losing a bit of detail in the shadows. Otherwise, this is a satisfying release.

The monaural soundtrack is provided in DTS-HD Master Audio 2.0. As far as mono tracks go, the sound for this

1972 film is pretty good. The score is rather three-dimensional given it is limited in channels, and dialogue is clear and full. There is no clipping or issues with hiss and pops either, so they’ve done a really good job cleaning it up.

The hour-long documentary The Mystery of Kenny and Kathleen, which offers up new interviews with actors Richard Thomas and Sian Barbara Allen is the most compelling extra included on this release.

You’ll Like My Mother will never be considered on the level of horror/thrillers of the same era like Rosemary’s Baby, The Exorcist or The Omen, but as a time killer it is a fine little thriller that has its moments.

You’ll Like My Mother (TheaterByte Blu-ray Review)
3.1 / 5 TheaterByte Rating
{{ reviewsOverall }} / 5 User Rating (0 votes)
PGRating Certificate
Universal Pictures/Scream FactoryStudios & Distributors
Lamont JohnsonDirector
Jo Heims, Naomi A. HintzeWriter
92 Mins.Run Time
$29.99MSRP
10 May 2016Release Date
1.85:1Aspect Ratio
AVC 1080pVideo
English DTS-HD MA 2.0 MonoAudio
The Creative Content
The Video
The Audio
The Supplements
Summary
You'll Like My Mother is a perfect "catch on TV" kind of thriller, since it has the feeling of something made for television anyway. It won't ever be a top-tier horror classic, but it has its moments and this Scream Factory Blu-ray is a pleasing edition of the film.
What people say... Login to rate
Order by: