From writer/director Shinkai Makato, who bought us Voices of a Distant Star and 5 Centimeters Per Second comes Your Name., another inventive and heartfelt anime film. The night of a beautiful meteor shower, male high school student in Tokyo Tachibana Taki and female high school student from a rural town Miyamizu Mitsuha discover they can switch bodies in their dreams. Over the course of the next few days the two try to adjust to living in the other’s body without disrupting each other’s lives, leaving notes for each other in each other’s notebooks and on each other’s cellphones. As the two high schoolers begin to develop feeling for one another, Taki makes a discovery that Mitsuha had actually met him prior to the storm and that the two are separated by more than just distance; he must somehow warn Mitsuha about the meteor storm that looks like it will strike her small town.

In his previous efforts Shinkai has been fascinated with love and the effects external forces such as time and distance have on relationships. Your Name. continues in that vein, expanding the themes of the short film Voices of a Distant Star, in particular, into a feature film form that is ingenious as well as beautifully written and animated. These inventive narratives are the sorts of stories that turned Studio Ghibli into an international powerhouse – but this isn’t a Ghibli film, this one is from the production house CoMix Wave Films, which is best known outside of Japan for Children Who Chase Lost Voices.

The protagonists in Your Name. are both seeking something they can’t quite fathom, something they can sense, but don’t understand what it is. The plot twist in the film dealing with time and distance, more sci-fi than romance, makes the star-crossed high school kids’ romance a difficult task, but Shinkai invests the protagonists with a lot of emotion and eccentricities that make us want to follow them and root for them to make it against all the impossible odds.

Visually, Your Name. is a stunning film in keeping with Shinkai’s previous efforts and similar to the traditional anime features that follow the trend set long ago by Studio Ghibli. The most remarkable moments come during the meteor shower, but that is hardly the only time the film’s visual elements shine. The artwork detail and character designs are beautiful throughout and it is a colorful film as well. This is one that the entire family can appreciate, not just fans of anime. 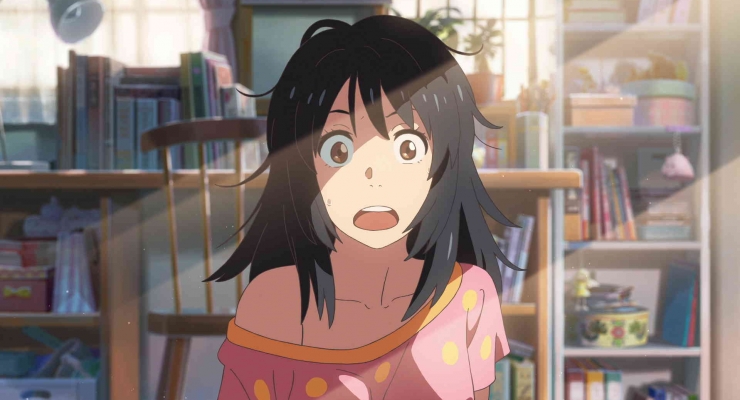 Your Name. comes to Blu-ray with a beautiful AVC 1080p encodement from Funimation that has excellent colors, brightness and detail with minimal banding ad no aliasing. This is a reference quality disc all the way.

Your Name. on Blu-ray has both the original Japanese-language 5.1 mix and a 5.1 English dub included in Dolby TrueHD. Both performances are superb and the mixes are up to snuff for a film such at this with a good amount of ambience in the surrounds, wide stereo imaging and a decent amount of dynamic range.

We get an interview with writer/director Shinkai as well as two other featurettes and the usual inclusion of Funimation trailers.

While Shinkai isn’t ploughing fresh soil with Your Name. his command of this genre has reached new emotional and technical heights in this film. It is a perfectly polished gem good for all ages with an encouraging message at its core.

Your Name. is out now on Blu-ray Combo Pack, DVD,  and Limited Edition from Funimation