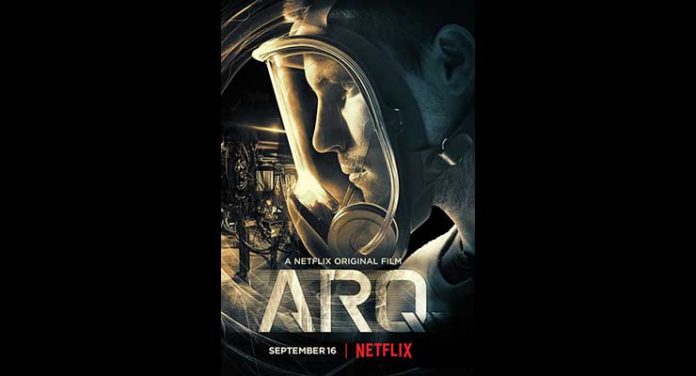 Ninety seconds into the film ARQ, former military engineer Renton (Robbie Amell, The Flash) is yanked out of the bed that he is sharing with girl friend Hannah (Rachael Taylor).  Both are then bound to chairs by a trio of masked men simply known as Father (Gray Powell), Brother (Jacob Neayam), and Sonny (Shaun Benson).  Set somewhere in a dystopian future, the Earth has been ravaged by the evil Torus Energy Corporation and is experiencing a massive energy crisis, a toxic atmosphere, and serious food shortage. Renton has invented the ARQ (Arching Recursive Quantifier) for Torus and installed it in his garage laboratory. The ARQ is a perpetual motion turbine generator with the potential to be a world-saving energy device but it also functions as a time machine that somehow (and inexplicably) causes the same recurring three-hour-and-fourteen-minute time loops in which all the characters are trapped.

Renton discovers that Hannah AKA “Mother” is in cahoots with their captors, all members of the “Block,” an underground movement pitted against Torus. The three men claim to be after Renton’s “scrips” or electronic currency but their real mission is to retrieve the ARQ for Torus. In the initial loop sequences, Renton goes through successive “live-die-repeat” cycles as he acquires increasing amounts of information to perfect an exit strategy for Hannah and himself.

Occasional television reports, broadcast holographically on one of Renton’s walls, describe what is going on in the outside world and they do not paint a very pretty picture. Although we are nearly spared a look at the environment (at least until the end of the film), from all accounts, there may be nothing left to see. The challenge that Renton and Hannah now face is to break out of their time loop and to do something positive for our planet. 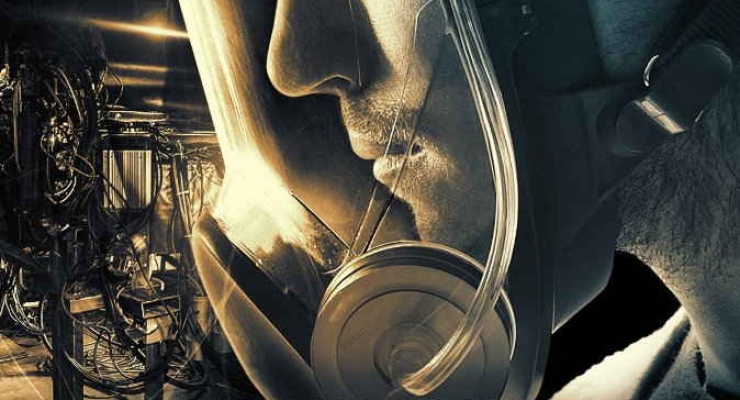 Writer/director Tony Elliott (Orphan Black) spins a taut tale shot almost entirely in a single series of rooms in Renton’s house. The claustrophobic nature of the oppressively darkened set enhances the dramatic tension as the small cast plays out a storyline that changes with every time loop reboot. The leads, Amell (The Flash) and Taylor (Jessica Jones) do a creditable job in fleshing out their characters particularly as they are continually kept off balance and challenged by a script as protean as this one is. The score by composing partners Keegan Jessamy and Bryce Mitchell is evocative and heightens the suspense with every measure. Daniel Grant’s cameras draw viewers into a shadowy, hot-house world where nothing is what it first appears to be and the plentiful violence that plays out in each time loop is quite graphic. There is a long list of time-loop films ranging from the quirky comedy Groundhog Day to the recent alien invasion entry Edge of Tomorrow. ARQ is a pretty traditional time-looper, for the most part, but also one that delivers a very distinct and important message: we must make every effort to prevent large corporations from ruining our planet. Fans of sci-fi thrillers as well as environmentalists should eat this one up. ARQ is now available for viewing on Netflix.