Criminal: UK, Spain, France, Germany is a 12-episode international crime series set in the capital cities of these four European countries. Each episode is titled with the first name of the suspect being questioned by the police. Although the languages of each of the four installments differ (subtitles and dubbed-in English are available for the Spanish, French, and German segments), their formats are quite similar down to the identical interrogation rooms in every episode. All of the ensuing action (or lack thereof) is confined to the room where the accused are questioned by teams of inspectors while behind the one-way mirrors, their police colleagues monitor and critique the proceedings, sometimes interrupting them if matters get out of hand.

The UK installment gets off to a running or rather sitting start in “Edgar,” as pathologist Dr. Edgar Fallon (David Tennant) receives relentless interrogation from Detectives Tony Myerscough (Lee Ingleby) and Hugo Duffy (Mark Stanley) about the brutal murder of his fourteen-year-old stepdaughter Nickie.  Fallon, the prime suspect in this case, continues his string of “no comment,” as recommended by his attorney Anita Baines (Lolita Chakrabarti).  Suddenly Fallon deviates from this routine and volunteers startling information about Nickie and her alleged sexual relationship with her netball coach. With a lack of tangible evidence and time running out on the police, it begins to appear that the good doctor might beat the rap. The other two episodes “Stacey” (Hayley Atwell) and “Jay” (Youssef Kerkour) deal with a woman accused of poisoning her sister’s abusive boyfriend and a truck driver who may have engaged in human trafficking.

Criminal: Spain takes viewers to Madrid where “Isabel” (Carmen Machi), a champion Dalmatian dog breeder, is a suspect in the murder of one of her many one-stands. “Carmen” (Inman Cuesta) is a desperate young woman burdened with the care of her autistic younger sister who was found dead in her bathtub, while “Carmelo” (Eduardo Fernandez) is a sleazy drug-dealer trying to avoid prison.

Criminal: France opens with “Emilie” (Sara Giraudeau), a young woman who profited from her attendance at the 2015 Bataclan Theater massacre but was she really there? “Caroline” (Nathalie Baye), a middle-aged owner of a large construction company becomes a prime suspect in the death of a young construction worker. “Jerome” (Jeremie Renier) gets questioned by Inspectors Hargan (Laurent Lucas) and Mateef (Mhamed Arezki) about the brutal murder of a young gay man.

Criminal: Germany delivers the final three episodes– “Jochen” (Peter Kurth), “Yilmaz” (Deniz Arora), and “Claudia” (Nina Hoss). The first recalls the mysterious disappearance of a handyman 30 years ago, the second, a wife’s fall down a flight of stairs that might not be accidental, and the third, a last-ditch effort to get the lover of a dead serial killer to provide the location of the body of a long-deceased girl so that her dying mother can give her a proper burial. 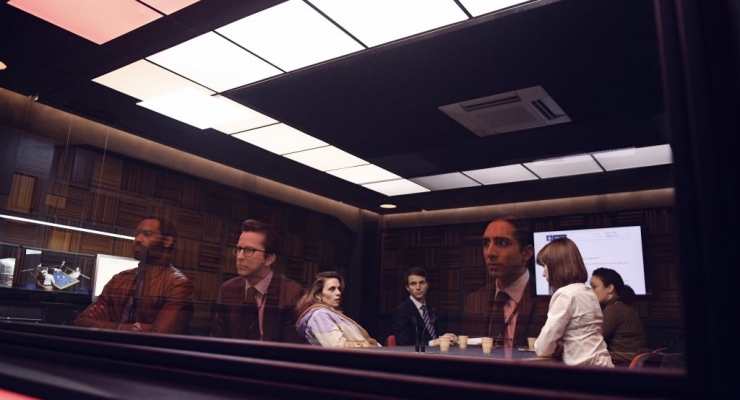 Each of these trilogies uses its same group of police investigators and reveals an insider’s portrait of criminal interrogation as it is being conducted in the hyper-vigilant 21st century. The interplay between those accused and their interrogators is often tense and contentious, making those on both sides of the one-way mirror active participants in what transpires in the examination room.  As we get to know each investigative team better, we get to see their more human sides often seething with professional jealousy, rampant sexism, and personal foibles.  Unlike the many crime shows on current network and streaming television, the actual crimes in question are never shown on the small screen but only provide the starting points for each episode.  To add further touches of realism, a number of the suspects turn out to be quite different persons from how they originally came across, not all of the accused turn out to be guilty, and not all of the cases are wrapped up with a neat bow. The Criminal series is a terrific watch but, due to the often disturbing nature of the crimes in question, should be viewed with sufficient breaks.  Highly recommended.