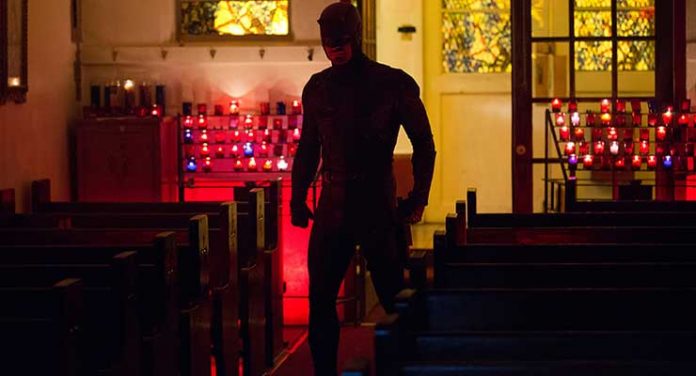 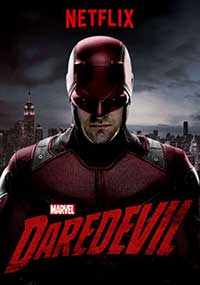 ex-Marine war hero who goes after the Irish Mafia, a Mexican drug cartel, and the Dogs of Hell biker gang that he believes responsible for murdering his family and nearly killing him. One of the various backstories here implies that the NYPD is covering up the real cause of this tragedy.

The Matt-Karen relationship heats up but gets confounded by the appearance of an old flame (and another Marvel character) Elektra Natchios (Etodie Yung) who had taken Matt’s carnal knowledge to an entirely higher (or lower) level. Playing on their previous relationship, Elektra gets Daredevil to help her avenge her father’s death but draws him into a war with the yakuza and, were it not for the intervention of their blind mentor, Stick (Scott Glenn), the pair would have been

killed. Further complications ensue when Stick intimates that an apocalyptic attack from “The Hand,” yet another gang, is imminent. Meanwhile, a wounded Castle is tried for multiple murders by ambitious district attorney Samantha Reyes (Michelle Hurd). In another quirk of fate, Frank is defended by the N&M firm but goes to the same prison that houses serious baddies like Wilson Fisk, providing one more tangle to an already convoluted yarn. But this is really only half of the story, as many other characters and events move in and out of this series at laser speed. Frank takes aim at the biggest drug dealer in Hell’s Kitchen, the mysterious Blacksmith, who will turn out to be someone who we have already met while Daredevil goes after the ninja crime boss Nobu (Peter Shinkoda) who is involved with Wilson Fisk and the infamous “Dark Sky” organization.

Shot mostly at night, the show’s prevailing darkness underscores both the strengths and weaknesses that differentiate the sightless Daredevil from other Marvel heroes. When compared to its predecessor, Season 2’s

storyline is much more diffuse and the copious fight scenes do not help matters much as they begin to generate more tedium than excitement. Shades of the 1960s Batman television series, the only thing missing are the cartoon sound-effects balloons hovering over each hand-to-hand combat sequence. But forget about Batman, the violence and carnage of this series, in spite of many cutaways, far exceed anything that we would have seen in that bygone television era. Perhaps this is the drag down of the second season, making it less than what it might have been. Daredevil: Season 2 looks like the writers and directors went back to the same formula mill and, taking few if any risks, relied on the tried-and-true situations that made Season 1 so exciting. Still, hardcore Daredevil fans will most likely eat up the seemingly endless blood, gore, and mayhem, and continue to root for their sight-impaired red champion of society’s underdogs. There are already rumors about Daredevil Season 3 that will involve the principal screenwriters Doug Petrie and Marco Ramirez and that will tie up a number of Season 2’s loose ends. We can only hope that the series’ creative team will refocus their obvious talent and give us something better than what viewers got on this reboot.