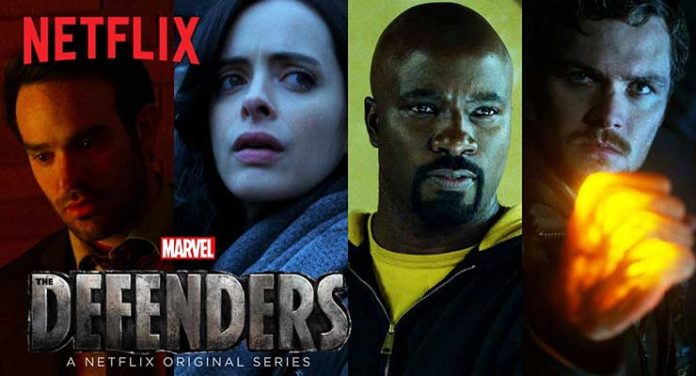 Marvel Entertainment and Netflix unite four series “heavyweights” Jessica Jones (Krysten Ritter), Danny Rand/Iron Fist (Finn Jones), Luke Cage (Mike Colter), and Matt Murdock/Daredevil (Charlie Cox) to fight crime in The Big Apple. In the latest Marvel/Netflix collaboration, the Netflix Original Series Marvel’s The Defenders, as they are now known, must somehow thwart the nefarious plans of the international crime syndicate simply known as the “Hand.” If you have not seen Iron Fist, then be apprised that the five “fingers” of the Hand acquired their powers and immortality in the mystical Himalayan city of K’un Lun, home to warrior monks and accessible only once every fifteen years.

As episode one opens on this latest entry in the Marvel Netflix Original canon, Danny returns from Cambodia, Cage is freed from prison (again) thanks to Matt’s law partner “Foggy” Nelson (Elden Henson), Matt is now a full-time pro bono lawyer, and Jessica is still a snarky PI with a drinking problem. Some of the previous series’ romantic entanglements are eventually renewed: Elektra Natchios (Elodie Yung) and Murdock, Claire Temple (Rosario Dawson) and Cage, and martial arts sensei Colleen Wing (Jessica Herwick) and Danny.

Alexandra (Sigourney Weaver), the Hand’s lead “finger,” has just been informed that she is terminally ill. After connecting with fellow “finger” Gao (Wai Ching Ho), Alexandra starts the syndicate’s master crime plan and, BAM!, there is an earthquake in Hell’s Kitchen. Elektra Natchios (Elodie Yung) who died in Daredevil Season 2 gets resurrected as the ultimate Hand warrior, Black Sky. This proves to be an unpopular move for the other “fingers” and one that risks Alexandra’s undoing. 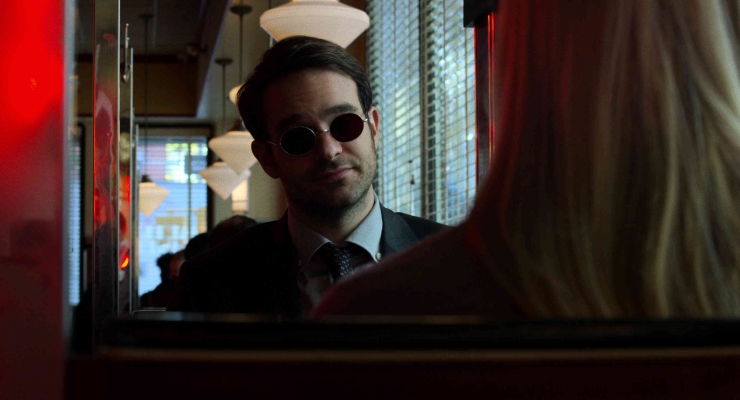 Jessica takes on a “routine” missing persons case that turns ugly, when her subject, noted architect John Raymond (Alex Moggridge), is killed by Elektra after he had stashed a large cache of explosives in his apartment for unexplained reasons. The four Defenders have their first “team meeting” at Alexandra’s office and immediately get involved in one of the many epic fight scenes, a well-established trademark of the Marvel superhero shows. Stick (Scott Glenn), Matt’s blind mentor, escapes from Alexandra’s clutches, at the cost of his right hand, and informs the Defenders that they alone can prevent the Hand from destroying New York. Superheroes don’t always play nice and with continued friction among the group’s members, it is a “marvel” that they do not do each other in before their inevitable showdown with the Hand, now augmented by its three other “fingers,” Sowande AKA “White Hat” (Babs Olusanmokun), Bakuto (Ramon Rodriguez), and Murakami (Yutaka Takeuchi). By the series’ finale, there has been sufficient violence, blood, gore, and death to once again satisfy the many fans of this Marvel series.

If you have seen any of the previous Netflix Original Marvel series, then you have surely seen this one, albeit in all of its 4K Ultra HD glory (the series is also available in either HDR10 or Dolby Vision HDR formats depending on your equipment). Writers Douglas Petrie and Marco Ramirez collaborated on the two seasons of Marvel’s Daredevil and have gotten the Marvel superhero formula down pat: take an individual with superhuman powers, add some character flaws, season with a heart-rending backstory, and voilà, you will get any one of the Defenders. There are only so many hand-to-hand combat sequences that you can watch before becoming completely satiated and left wanting something resembling a compelling story line. Even more so, you begin to hunger for characters that are actually interesting. The cast’s female principals are the series strengths even though Jessica Jones was woefully underused, and this is where this Netflix Original The Defenders ultimately disappoints, as, putting it charitably, Cox, Colter, and Finn are simply one-dimensional dullards. Dramatic wells eventually run dry and while this might not be an issue for Marvel devotees who seem to want more of the same, the creative team really needs to up its game to regain my interest in another Netflix Original Marvel series.

Netflix Original Series Marvel’s The Defenders is available for streaming in its entirety on Netflix.