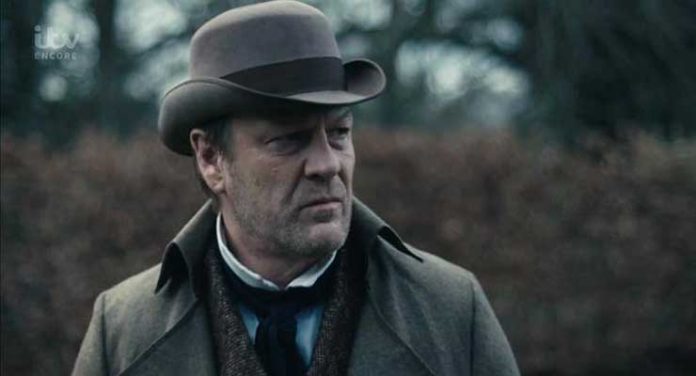 The Frankenstein Chronicles takes its title from Mary Shelley’s classic horror novel published shortly before the time in which this two-season twelve-episode series is set. Season One immediately provides the somber tone for what is to come. London river police inspector John Marlott (Sean Bean) finds a young girl’s body, pieced together from parts of different children,  washed up on the Thames River bank. Home Secretary Sir Robert Peel (Tom Ward) orders Marlott and corporal Joseph Nightingale (Richie Campbell) to conduct a hush-hush investigation that eventually gets blown wide open when journalist Boz (Ryan Sampson) pens “The Frankenstein Murders” story for The Morning Chronicle. This grisly account threatens Parliamentary legislation to legalize donation of bodies for medical education and research.

We meet Mary Shelley (Ann Maxwell Martin) whose friend James Hogg (Hugh O’Conor) died during a failed “reanimation” experiment that inspired her novel. Marlott’s investigation eventually implicates Dr. Garnet Chester (Mark Bazeley) as the child-murderer but when the doctor is found murdered, Marlott shifts his focus to Dr. Hervey. Marlott is captured and drugged by Hervey’s man Lloris (Brian Milligan) and reawakens in his home only to have Nightingale find him covered in blood and holding the sword that severed Flora’s throat. After his arrest, conviction, and hanging,  Marlott is miraculously “revived” in Hervey’s laboratory. At the end of Season One, Marlott has killed Lloris and fled the Hervey hideout.

Season Two of The Frankenstein Chronicles opens three years later as Marlott has been confined to the Bethlem Asylum better known as “Bedlam.” He murders a guard and escapes to the poor outskirts of London. Westminster’s Archdeacon has been brutally murdered but the investigation is subverted by its corrupt Dean (Guy Henry). Kindly Reverend Ambrose (Andrew Havill) shelters Marlott in his church but after he is also murdered, Marlott again goes on the run. Another clergyman, Reverend Eastman soon suffers the same fate.

Wealthy Frederick Dipple (Laurence Fox) visits Peel and promises to ease the way for construction of new cemeteries by having the impoverished residents of Pye Street poisoned with water from their own community well. Seamstress Esther Rose (Maeve Dermody) repairs a gown for Dipple’s “automaton,” and becomes the new object of his affections.

Ex-priest Spence (Francis McGee) connects the murders of the three clergymen to their opposition to the Dean’s shady land deals, in which Dipple had heavily invested. More murders ensue, and Dipple’s secret backstory and connection to an elixir of eternal life is finally revealed. Now Marlott alone must foil the evil plans of Hervey and Dipple if he is to save Esther Rose and spare London from more death and destruction.

Exceptional performances by craggy-faced Sean Bean and his suave nemesis Ed Stoppard propel much of this show’s drama but there are no weak links in this large cast. Deliberate blurring of reality and imagination illustrate Marlott’s hallucinations, a side effect of treatment with toxic mercury for his advanced syphilis. Among the few fails here is the trope of the William Blake drawings that ultimately go nowhere. Given the visual intensity of each episode, sparing little in the way of blood, gore, and mutilation, I would recommend taking the series in modest doses rather than binge watching it as I did for this review. My thanks go to Netflix for rescuing this show, originally intended for American audiences on the A&E Network, and there are just enough plot openings at the end of Season Two to make one hope for a Season Three.

The Frankenstein Chronicles is streaming now in its entirely on Netflix