3 Bopz Up — Kim Petras Drops New Single “Blow It All” 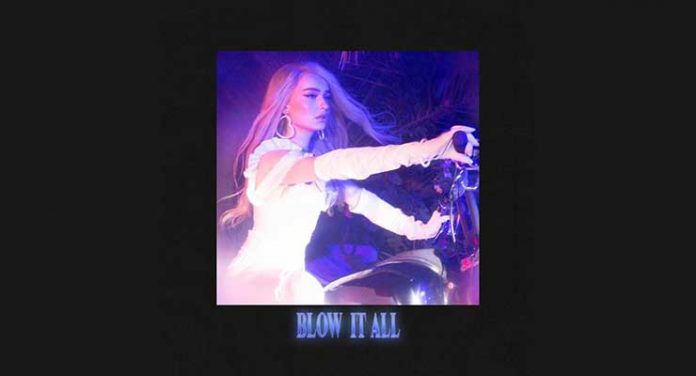 If her first era was filled with party-hard bops like “Hillside Boys” and “I Don’t Want it At All” that cleverly combined the musical styles of 1980s pop divas like Cyndi Lauper and Madonna with contemporary EDM, while exploring themes of broken hearts (“Heart to Break”), lonliness ( she crunes, “o, no, I get lonely when I’m solo” in “1, 2, 3 dayz up”), and jonesing for a little backseat action in songs like “Hills”, Kim Petras new crop of songs, incliuding today’s “Blow It All“, have been, commanding, glossy, and confident. Petras is no longer just a participant, she’s taking the reins. In the first of her singles to reach the iTunes Top 20, “Broken,” a slick R&B-style breakup song, Petras sang to the one who broke her heart, “I’m in Paris in Marc Jacobs,” no longer willing to just turn over her “heart to break,” she went on “when she leave you for your best friend, thaty sh*t karma, when you see me with my new dude that’s a come up”. Her second single, “Got My Number” returned to her more party hard style, with a percussive, bass-heavy beat, but this time, Petras was once again more assertive, flying her feminist flag, “I don’t wanna be a good girl tonight, I just wanna be a bad girl, awright?” She’s going to party, she’s going to sex it up, and damn anyone who tries to shame her.

Now she drops “Blow It All,” Katy Perry-esque anthem that starts off with a guitar riff right out of the early-90s grunge era before settling into a laidback 808-driven drumbeat custom made for blowing the woofers off a custom auto soundsystem while rolling through the city at night, as Kim Petras sings in her sweet falsetto “tonight, we got this, we gon be alright…can’t take it with you, blow it all tonight”. Kim has accumulated over 125 million global streams, broke into Top 40 radio with her pop hit “Heart to Break,” and opened for Troye Sivan‘s nationwide tour. Next up, Kim will perform at the sold-out World Pride NYC this June 29, and at Reading Festival, Leeds Festival, and Manchester Pride, alongside Ariana Grande and Years & Years, this August.