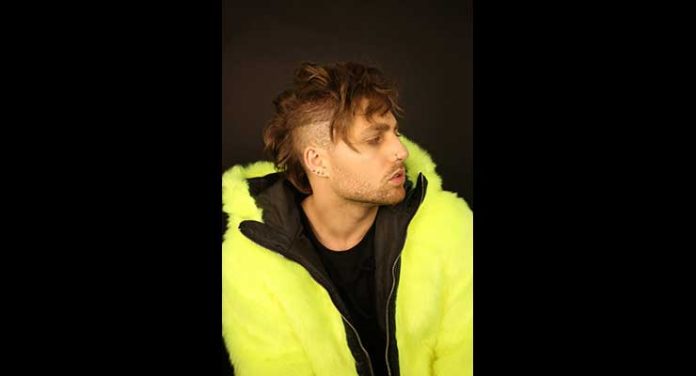 TheaterByte recently had the pleasure of spending some time with rising music star Rilan Roppolo, known in the popular music business simply as Rilan. He has just released the single “Love or Drugs,” and has more recordings queued up for this summer. Rilan introduces himself with the following quote:“I am not a vibe. I am pyrotechnics, dancers, strobes, and a world that looks like a crazy red-light district in the eighties. I don’t like chill music. I like pop goddesses and glam-rock gods. I am a spectacle.” Having trained in both music and dance, I should think that this young singer knows exactly what he is talking about.

TheaterByte: What was it like growing up in New Orleans?

Rilan: I thought that everywhere was going to be just like New Orleans—creepy, cultural—very European. There was jazz music playing all of the time and the entertainment scene reflected a real amalgamation of cultures. My parents used to take me to the French Quarter on weekends and expose me to street musicians and performers which probably explains the theatricality and roots of my music. I grew up listening to my parents’ music—the soundtrack of the 1980s—David Bowie, Madonna, Boy George. The coolest thing about Boy George was that he brought the Culture Club or really “club culture” to mainstream music.

TB: Let’s talk about the early influences on your musical career and styles.

R: Once upon a time there was sex, drugs, and rock ‘n roll, but people forgot the rock ‘n roll. Given the grounding that I had in Bowie, Prince, and Madonna, I also appreciated some genre-breaking groups like Soft Cell and Tears for Fears that brought out the dark side of popular music. There was ’90s “industrial music” like Nine Inch Nails and there was the flash of the show like Brittany Spears and Christina Aguilera.

TB: The descriptive term “Glam Pop” gets attached to your approach to new music. How would you define it and how has it influenced your performance style?

R: That term rubs me the wrong way because it sounds so fabricated. I am not a “pop” star, I am a rock star. Everything that I do for a production I create myself. Besides the music, I work on the costumes, choreography, and aim for an aesthetic that is interesting and cool. I am darker than Glam Pop–I am Glam-grunge-pop and would literally incorporate trash if it made sense in the performance. I give credit to New Orleans for my darkness. It is an old city with a lot of decaying buildings and dark passages.  I can also say that Lady Gaga led the way for me as she is a performer that redefined the art of staging as well as singing.

TB: Tell me about your new EP that is coming out this summer.

R: The album is a bunch of songs like “Love or Drugs.” I moved to Los Angeles after high school and became an adult in that city. I write about my life experiences in LA where I was that weird kid that didn’t  fit in with the local scene.  I like to present the satiric aspects of the LA party scene as it currently is in that song but also believe that you can always dance away your problems to music. Basically, I never liked to play a part—I always wanted to be myself.

TB: What can Rilan fans look forward to this year?

R: I have another single coming out. It is satirical, sarcastic and reflects that I do not believe in fads or conforming to a social norm. I am going to start touring this month and you can find my performance schedule on my Instagram page, iamrilan.

Perhaps, there is no better way to finish this session than with another Rilan quote:“I want people to know if they’re not normal, it’s not just okay, but it’s actually cool. Don’t fit into a group. Don’t try to be someone you’re not. I want to give you an experience. I want you to be transported. I’ve created a world that I wish the world looked like. Welcome.”

Having seen the video of “Love or Drugs” and its stunning recreation of the 1980s “glam-pop” scene, I can only hope that this young artist continues his climb up the charts and that we will be hearing and seeing a lot more of him in the future.