December 31, 2017.  Tosca, Sir David McVicar’s second new production of the Metropolitan Opera’s 2017-2018 season returns this opera to its historical roots and effectively replaces the controversial and poorly received 2009 Luc Bondy version . This production could rightfully be called “a tale of two casts,” as there was a gradual exodus of the original leads, tenor Jonas Kaufmann, soprano Kristine Opalais, bass-baritone Bryn Terfel and conductor, Andris Nelsons. Coming to the rescue were rising stars Sonya Yoncheva and Vittorio Grigolo, and Met veteran Željko Lučić. The performing ship seemed to right itself even further when music director emeritus maestro James Levine was named to conduct one of his signature operas. The suspense surrounding the opening night, a New Year’s Eve Gala performance, heightened once more when Levine’s contract was suspended three weeks ago, following allegations of decades-old sexual abuse of minors. Fortunately, veteran opera conductor, Emmanuel Villaume, who had previously led several Met productions, stepped in on very short notice.

Set in Napoleonic-era Rome, the three acts cover a single afternoon, evening, and early morning in June, 1800. The plot involves a love triangle between the painter and Republican-sympathizer Mario Cavaradossi (Grigolo), opera singer Floria Tosca (Yoncheva) and the lustful Roman Chief of Police Baron Scarpia (Lučić). Cavaradossi hides political prisoner Angelotti (Christian Zaremba) but this proves to be his undoing when he is arrested by Scarpia’s henchmen and later sentenced to death. Tosca visits the Baron’s apartment and begs for Mario’s life.  Scarpia  promises a “safe” passage letter for the two lovers but there is a major catch.  Tosca must give herself to Scarpia, and Mario must undergo a “simulated” execution. The Baron makes his advances on Tosca, but she fatally stabs him and seizes the letter. Cavaradossi awaits his impending death when Tosca suddenly appears, tells him how she killed Scarpia. The pair will get to leave for a safe and happy future after Mario pretends to die after being “executed.” The firing squad shoots Cavaradossi who falls to the ground. When Mario continues to remain motionless, Tosca now realizes that the execution was real. Before the police can apprehend her, Tosca leaps from the parapet to her death. 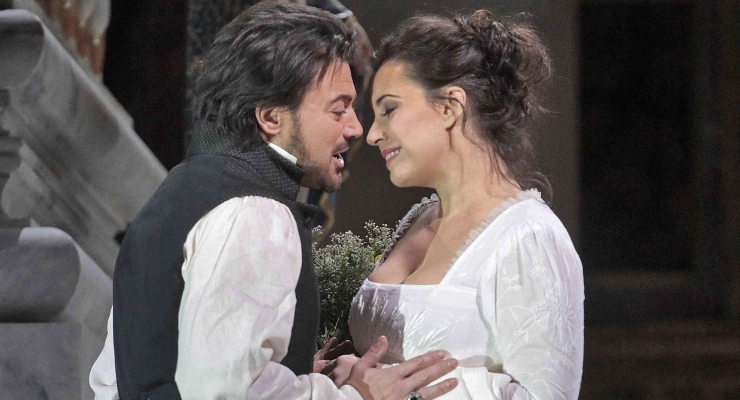 Director McVicar often goes for very dark productions, but this Metropolitan Opera production receives welcome illumination from lighting designer David Finn that highlights the dramatic focal points of each act. John Macfarlane provides massive, great-looking sets hearkening back to the glory days of the Franco Zeffirelli era; his costumes are both handsome and period perfect. Given the limited rehearsal time afforded to this replacement cast and conductor for a brand-new production, the results of this New Year’s Eve 2017 premiere performance must be considered a “Miracle at the Met.”

Bulgarian soprano Yoncheva has become a “hot property” in the opera world. Her stunning stage presence coupled with a moving assumption of the title character brought back distant and fond memories of the legendary Maria Callas and made for an exciting role debut. Also making a role debut, Vittorio Grigolo, the only native Italian among the principals, delivered an impassioned, often hyperkinetic performance that gripped the audience at every turn. The Yoncheva-Grigolo chemistry literally smoldered with some of the longest smooches that I have seen recently on the Met’s stage. Among the best of today’s dramatic baritones, Željko Lučić provided a smarmy yet intelligently sung Scarpia, avoiding the too-often heard baritonal barking. The smaller parts of Angelotti, the Sacristan, and Spoletta were well-managed by Christian Zaremba, Patrick Carfizzi, and Brenton Ryan, respectively. The unsung hero of this Metropolitan Opera opening night was clearly Maestro Villaume who kept his big orchestra from dragging its collective feet, a potential concern with a score as ponderous as Tosca can be, and gave his singers superb support. As might be expected on any opening night, there were a few late orchestral entrances and some minor vocal flubs. Still, this remained a treasurable Tosca that seemingly tossed aside any of its pre-performance jitters, as its artistic “pinch hitters” simply knocked the proverbial ball out of the park.