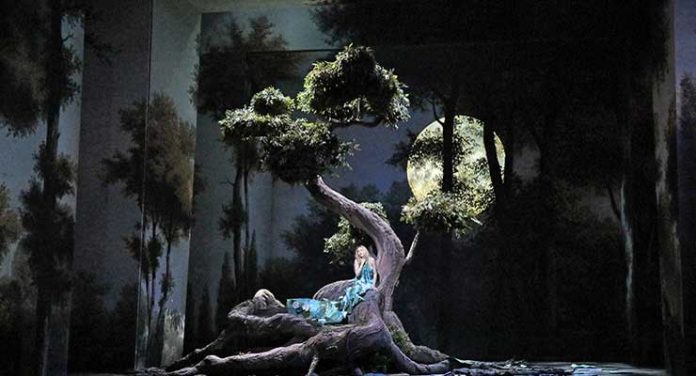 February 25, 2107. Czech composer Antonin Dvořák took a Slavic folktale about a water nymph that wanted to become a real woman (think Hans Christian Andersen’s “Little Mermaid”) and transformed it into an ultra-romantic opera with a storyline that will break your heart. The Metropolitan Opera most recently staged this work in a 2014 revival of Otto Schenk’s venerable staging with soprano Renee Fleming and tenor Pyotr Beczala. This season introduces audiences in the opera house and in movie theaters around the world to Mary Zimmerman’s brand-new production with an all-star cast, led by Sir Mark Elder in the pit.

Rusalka (Kristine Opolais), daughter of Vodnik the Water Gnome (Eric Owens), has fallen in love with a hunter who turns out to be the handsome Prince (Brandon Jovanovich). She wants to become human and seeks out the witch Je ̆zibaba (Jamie Barton) who gives her a magic potion that will make this transformation possible. There is an important side effect: once she drinks the potion, Rusalka will lose her ability to speak. Je ̆zibaba warns the water nymph that if she fails to win over her Prince, then both will be condemned to death. The Prince is smitten by Rusalka’s beauty and prepares to marry the voiceless girl. However, the relationship between Rusalka and the Prince grows cold; a foreign Princess (Katarina Dalayman) arrives and gains the Prince’s affections. Vodnik takes Rusalka back to their watery world. Je ̆zibaba entreats the water nymph to kill the Prince and save her own life, but she refuses. The disheveled Prince appears, willing accepts Rusalka’s fatal kiss, and dies in her embrace. 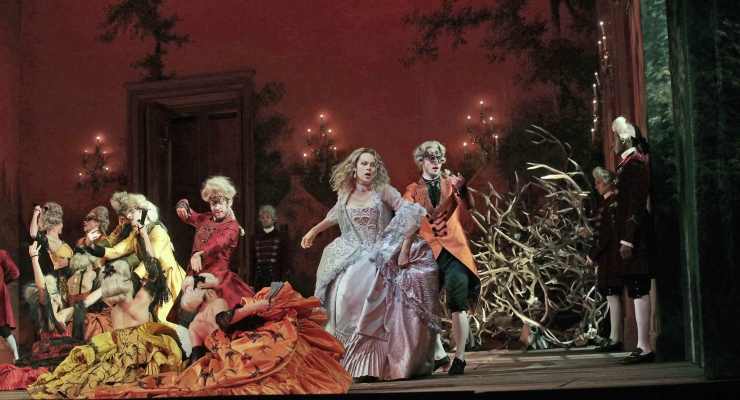 Rusalka is one of Latvian soprano Opolais’s signature roles. Her rendition of the best-known aria, “Song to the Moon” (“Měsíčku na nebi hlubokém”) occurs early in Act I and, if lacking Renée Fleming’s vocal sheen, is still  very nuanced and emotive. Opolais traverses the many facets of her complex character, ranging from naïve to feral, and manages to communicate wordlessly for most of Act II. American tenor Jovanovich has the ideal looks and voice for the Prince and is a terrific partner for Opolais. Bass-baritone Owens and soprano Dalayman make the most of their supporting roles. The real find in this cast is American mezzo-soprano Jamie Barton who, in both voice and temperament, creates an over-the-top witch, complete with cobalt-blue contact lenses and spider-web dress. The remaining cast includes a charming trio of singing wood nymphs (Hyesang Park, Megan Marino and Cassandra Zoé Velasco) and Austin McCormick’s accomplished corps de ballet.

Maestro Elder gets the Met Orchestra to pour out the heart and soul of one of the most gorgeous operatic scores ever penned and its lingering, luscious phrases simply soar out of the pit and float through the large house. Rusalka is director Mary Zimmerman’s fourth production for the Metropolitan Opera, preceded by a controversial Lucia di Lammermoor, a puzzling La Somnambula, and a rather static Armida. I am delighted to report that this newest production represents a significant improvement in both staging and dramaturgy. Rusalka has an inherent problem of getting the spirit world to connect with the human world, and, for the most part, Zimmerman’s stage business manages successfully to bridge this gap. Daniel Ostling’s atmospheric sets, Mary Blumenthal’s truly fantastical costumes, and T.J. Gercken’s creative lighting also aided the director’s cause.

Rusalka is an operatic folktale albeit quite a dark one and runs through March 2, 2017 More information about this production can be found at the Met’s website www.metopera.org.