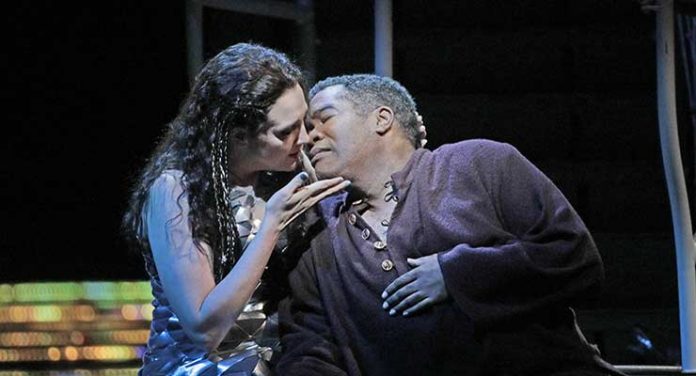 December 10, 2016. The Metropolitan Opera recently launched the long overdue premiere of Finnish composer Kaija Saariaho’s 2000 opera L’Amour de Loin (Love From Afar). This debut was the first opera by a female composer to reach the Met’s stage in over a century and only the fourth time that a female conductor, fellow Finn Susanna Mälkki, has led the Metropolitan Opera Orchestra.

L’Amour de Loin is a three-character opera with chorus set in the 12th century. While the troubadour Prince Jaufré of Blaye, France was a real-life character and wrote many poems to his “love from afar” before dying on a Crusade, his meeting with the Countess of Tripoli is most likely apocryphal. Those familiar with impossible love stories like that of Tristan and Isolde will immediately understand the essence of this work.

Prince Jaufré Rudel (Eric Owens) has tired of countless sensual pleasures, and begins to obsess over an idealized but far distant love that turns out to be Countess Clémence (Susannah Phillips). A Pilgrim (Tamara Mumford) tells Jaufré that he has met Clémence in Tripoli, has told her about Jaufré, and shares some of the love songs that the troubadour has written about her. Clémence is initially offended but eventually becomes fascinated by this mysterious lover. 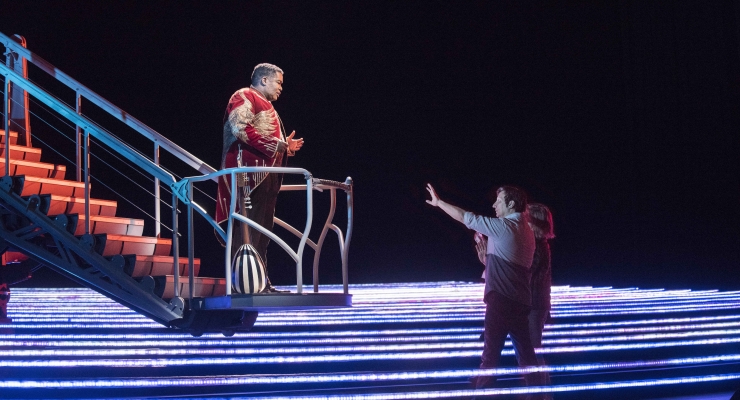 Jaufré  has never been to sea but decides to make the trip to see Clémence who still has reservations,  fearing that she will not meet the Prince’s idealistic expectations. During his long sea voyage, and equally beset with doubts about his own worthiness, the Prince becomes ill and is near death when he reaches Tripoli. Clémence and Jaufré finally meet and, after sharing their passionate expressions of love, the Prince dies in Clémence’s arms. Distraught, the Countess blames herself for Jaufré’s death and, in a deliberately ambiguous conclusion, she prays, but is it to God or is it to the memory of her late love from afar?

The collaboration between Saariaho and French-Lebanese librettist Amin Maloof builds on this ultra-romantic legend and the score of this two-hour long opera recalls medieval chansons and Middle Eastern harmonies with clear touches of Claude Debussy in the sea music. Mälkki was the perfect choice to conduct the Met Orchestra and demonstrates a hand-in-glove relationship with Saariaho’s lush and luminous score that is quite voice-friendly and, in many vocal passages, profoundly moving.

Canadian stage director Robert LePage has created  innovative productions for the Met Opera including Berlioz’s La Damnation de Faust and Wagner’s Der Ring des Nibelungen. L’Amour de Loin features minimalist sets by Michael Curry (The Lion King, The Magic Flute), and is offset by long strips of computer-controlled lights that suggest the shimmering and shifting movement of the sea, the backdrop for most of this opera. As might be expected in LePage stagings there is a dominant “machine” that moves characters effectively around the stage.  Donald Palumbo’s “Greek” chorus with wordless and sung commentaries bobs and weaves through the lights,  providing a sense of otherworldliness so essential to this work.  Speaking of voices, this carefully selected all-American cast could hardly be bettered on today’s stages. Bass-baritone Owens is an eloquent exponent of his conflicted character’s struggle to attain ideal love and, for the most part,  he successfully contends with the often cruel demands of his role’s high tessitura.  Soprano Phillips, the quintessential object of his desire, sensitively partners him and delivers an  outpouring of silvery tones that morph into potent declamation after the death of her lover. Mezzo-soprano Mumford, no stranger to trouser roles at the Met Opera, is the perfect go-between and her delivery of Jaufré’s songs to Clémence is absolutely stunning.

L’Amour de Loin is a fascinating musical study of the medieval concept of ideal love and an unqualified triumph for this 2016-2017 season. Its run continues through December 29, 2016 and more information about this and other upcoming productions can be found at the company’s website www.metopera.org.