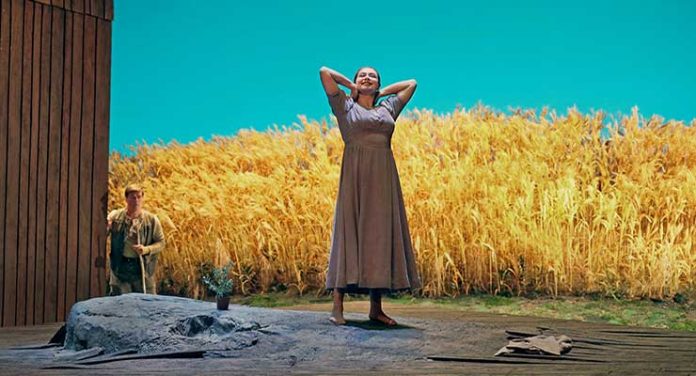 October 28, 2016. The Metropolitan Opera opens its revival of the 2003 production by director Olivier Tambosi with a staging that received mixed reviews at its première. 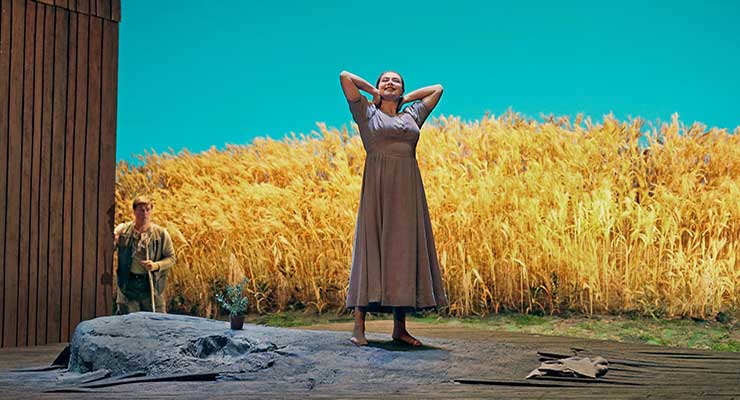 Jenůfa has several complicated relationships: Grandmother Buryja owns the local mill. Her two sons each married twice but they and all of their wives, except for Kostelnička, the village sacristan, have died. Old Buryja’s mill will pass on to her oldest grandson Števa, leaving the other grandchildren Laca and Jenůfa out in the cold.

Jenůfa is in love with Števa, an hard-drinking womanizer, and she secretly carries his child. Laca is infatuated with Jenůfa but, in a fit of jealousy, he accidently slashes her face.  Kostelnička discovers that Jenůfa is pregnant and hides the girl in her house until, during the winter, Jenůfa’s baby boy is born. Števa arrives but he is now engaged to the Mayor’s daughter, Karolka, and refuses to accept responsibility for his son. After Števa runs off, Laca enters and Kostelnička tells him that he is free to marry Jenůfa since her child has died. After ingesting a strong sleeping potion from Kostelnička), and exhausted Jenůfa falls asleep. The older woman wraps the baby in a blanket and slides him below the ice of the mill stream. Jenůfa awakens and Kostelnička tells her that the baby died. Laca promises to marry the grieving girl in the spring.

It is now Laca and Jenůfa’s wedding day but preparations for the ceremony are disrupted when a baby’s body is found under the melted ice. The crowd suspects Jenůfa of killing her child but before any harm can come to her, Kostelnička confesses to the murder. As Kostelnička is led off to her uncertain fate, Jenůfa forgives her step-mother and pledges her love to Laca.

Karita Mattila may no longer be singing the title role, but Jenůfa clearly remains her show. She is a consummate artist who delivers, on all vocal and dramatic accounts, the essence of this opera’s most complex character. Oksana Dyka captures Jenůfa’s initial naiveté and her bright voice grows in passion and power, as she finally commits herself to the man who disfigured her. Hanna Schwarz, now in her 70s,  remains a musical marvel, portraying a woman of similar age with the misfortune of having outlived her children. Joseph Kaiser’s characterization of a truly despicable character was marvelously sung and dramatically en pointe. After hearing powerhouse tenor Brenna perform, I felt that I was experiencing the total range and raw power of this role for the first time. Conductor Robertson completely understands the distinctive Janáček musical idiom and its use of “speech tunes” that incorporate the tonal and temporal elements of Moravian folk music. While I luxuriated in this gorgeous early 20th century music, delivered so well by the Met Opera Orchestra, it was hard to ignore the mostly sparse sets, including a central rock formation that morphed in size and shape as the opera proceeded. As Jenůfa is a psychological music drama, perhaps director Tambosi wanted us to focus more on the singers than on their surroundings. Having seen Janáček’s masterpiece a number of times,  the great thing about the outstanding music making that we get here is its ability to surmount the less than engaging staging and sets.

Jenůfa will run with the same cast and conductor through November 17, 2016. More information about this production can be found at the company’s website www.metopera.org.

TheaterByte at The Met: Leoš Janáček: Jenůfa
3.8 / 5 TheaterByte Rating
{{ reviewsOverall }} / 5 User Rating (0 votes)
The Metropolitan OperaArtist
The Lincoln Center for the Performing ArtsVenue
28 Oct. 2016Date
The Performance
The Staging
Summary
A very strong performance of this Czech operatic masterpiece that contends with disappointing staging
What people say... Login to rate
Order by: