Tristan und Isolde was the much anticipated season-opening new production with staging by Polish director Mariusz Treliński who was last seen in the Metropolitan Opera’s 2015 double-bill of Tchaikovsky’s Iolanta and Bartok’s Bluebeard’s Castle. 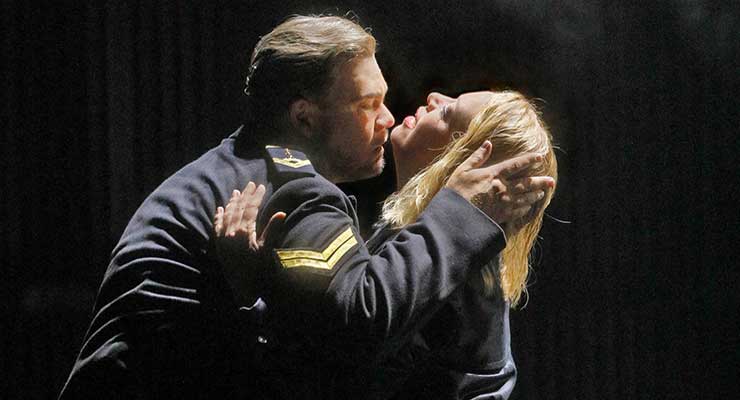 On paper and in person, this is the strongest cast that the Met Opera has assembled for this monumental work in many years with Met role debuts for most of the cast including Swedish soprano Nina Stemme (Isolde), Australian tenor Stuart Skelton (Tristan), Russians mezzo-soprano Ekaterina Gubanova (Brangane), and bass-baritone Evgeny Nikitin (Kurwevnal) while German bass René Pape reprises King Marke. Maestro Simon Rattle led the initial performances while the remainder (including the one that I saw) were under the baton of Ascher Fish.

Before the opera starts, an orphaned Tristan was taken in by his uncle, Cornwall’s King Marke. Many years later, Tristan sailed to Ireland to bring back Princess Isolde as Marke’s bride. When Isolde found a wounded man drifting in a boat, identified only as “Tantris, ” she nursed him back to health. Later, she discovered that this was actually Tristan who killed her fiancé Morold and she vowed to avenge his death.

As the curtain opens, Isolde and her handmaiden Brangane are on Tristan’s ship, about to land in Cornwall. A despondent Isolde plans to share a poisonous drink with Tristan but Brangane substitutes a love potion that both imbibe and they fall instantly in love.

When King Marke goes off on a hunt, the lovers are finally alone. Brangane warns Isolde that Melot, one of Marke’s knights, is suspicious of her mistress. When Brangane extinguishes the signal light, it is now safe for Tristan to come to Isolde. The two lovers share an ecstatic night and as dawn breaks, Melot exposes them to the King. After a brief fight, Tristan is seriously wounded.

The faithful Kurwenal returns the dying Tristan to his castle in Kareol. Isolde arrives only to have her lover die in her embrace. King Marke, having discovered that it was the love potion that led to his apparent betrayal, seeks vainly to unite Tristan and Isolde. As the opera ends, Isolde has a rapturous vision of Tristan and dies by his side.

The pairing of Stemme and Skelton carries the day with full-throated, force-of-nature singing that recalls the “golden age” of the Wagnerian repertoire. Brangane is one of Gubanova’s signature roles and she covers the gamut of this important supporting character. Nikitin and Pape, both seasoned Wagnerians, round out this absolutely magnificent cast. Israeli conductor Asher Fisch led a nuanced reading of this massive score, elicited details that are often buried beneath the wall of sound, and maintained a pace both well measured and fully supportive of his cast.

The fly in the ointment for some operagoers will be Mariusz Treliński’s staging and dramaturgy. Placed in a modern maritime setting, there are projections galore that often distract from the stage business. A serious dramatic miscalculation occurred during Act II when a screen projecting erotic symbolism descends and obscures the singers before the conclusion of the love duet, the pivotal moment of this long work. While Treliński’s concepts of a time-space continuum move from the concrete to the abstract, the oppressive darkness of the sets made the occasional beams of light quite startling if not blinding. Except for Tristan and Isolde’s love scene with its prolonged lip locks and copious groping, there was little physical connection between the characters.

Tristan und Isolde has concluded its run for the 2016-17 season, but considering the company’s substantial investment in this production’s staging and cast it may likely return in 2017-18. More information about this and other Met Opera performances can be found at the company’s website www.metopera.org.

TheaterByte at The Met: Richard Wagner: Tristan und Isolde (New 2016 Production)
4 / 5 TheaterByte Rating
{{ reviewsOverall }} / 5 User Rating (0 votes)
The Metropolitan OperaArtist
The Lincoln Center for the Performing ArtsVenue
27 Oct. 2016Date
The Performance
The Staging
Summary
A superb realization of a towering opera that features the strongest possible cast that could be assembled today. Staging is controversial and may be off-putting for some opera-goers.
What people say... Login to rate
Order by: