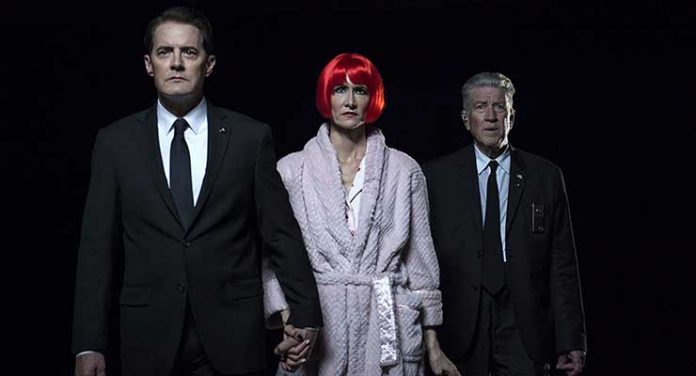 “The Return” or Season 3 begins 25 years later and Agent Cooper (Kyle MacLachlan) has “found” himself in an “alternate universe.” Scenes will shift between Twin Peaks, Washington, Buckhorn, South Dakota, and Las Vegas, Nevada, with occasional excursions to other worlds. Given David Lynch’s dramatic proclivities, Season 3’s multiple intersecting story lines and a cast of epic size will challenge even the self-appointed town authorities.

Buckhorn police detectives Macklay (Brent Briscoe) and Harrison (Bailey Chase) discover the dismembered body of librarian Ruth Davenport (Emily Stofle), and a bizarre series of events is triggered that will impact many of the show’s characters. A deeply tanned, longhaired Cooper doppelgänger “Dougie Jones” is an unscrupulous Las Vegas insurance agent with a gambling problem and is married to Janey-E (Naomi Watts) with young son, Sonny Jim (Pierce Gagnon). The real Agent Cooper remerges in Las Vegas as a catatonic “Dougie” and wins big at the Silver Mustang Casino owned by the Mitchum brothers, Bradley (Jim Belushi) and Rodney (Robert Knepper). The brothers were involved in an insurance fraud scheme, engineered by the real Dougie, and Cooper/Dougie’s life is threatened when his firm fails to reimburse them. 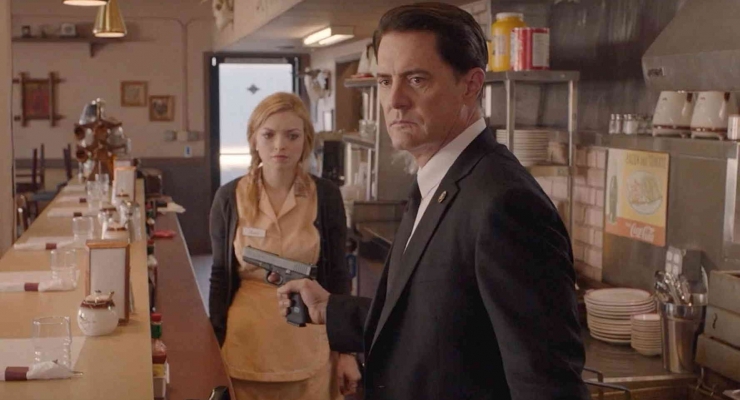 The FBI returns in force as Agent Tammy Preston (Chrysta Bell),  Director Gordon Cole (David Lynch) and Agent Albert Rosenfeld (Miguel Ferrer) continue their search for the missing Agent Cooper. They are joined by former agent Diane Evans (Laura Dern) who has her own backstory with Cooper. Agent Rosenfeld finally explains that “Blue Rose,” mentioned in the Twin Peaks prequel Fire Walk With Me, is a secret FBI task force to investigate UFOs.

When the headless corpse of Major Garland Briggs (Don S. Davis) turns up in Buckhorn, his son, deputy Bobby (Dana Ashbrook), joins chief Frank Truman (Robert Forster), and fellow deputies Andy Brennan (Harry Goaz) and Tommy “Hawk” Hill (Michael Horse) to find the “universe” in which the Major had spent the past 25 years. Following clues that were hidden during Season 2, Deputy Andy makes a brief trip to Agent Cooper’s mysterious world and the Twin Peaks-alternate universe connection is reestablished.

Numerous questions pop up and persist as the eighteen episodes churn ahead. Will Agent Cooper recover his memory and resume his obsession with the late Laura Palmer?  Will the “alternate universe” be explained to us?  Will Season 3 eventually make any sense whatsoever?

If all of this sounds incredibly complex, I have simply scratched the surface of one of the most byzantine scripts ever penned for a network television series. The relationships between the returning characters and the “workings” of an alternate universe will make more sense if you have first seen the first two seasons. Still, much here is new, strange and frustratingly unresolved at Season 3’s grand dénouement. David Lynch’s fascination with the supernatural world informs this quirky show and he seems quite content to toss out one bizarre image after another. Cinematographer Peter Deming recalls Frank Byers’s original film style, including ’90’s-style special effects, and composer Angelo Badalamenti reprises his atmospheric score. Most episodes conclude at the Twin Peaks Roadhouse with performances by familiar artists like Trent Reznor (Nine Inch Nails) and not so familiar ones like Hudson Mohawke.

The highly anticipated “cast reunion”  should hook those who loved the first two seasons. For newcomers, Season 3 may be more like goat cheese, cilantro or quinoa, an acquired taste that may or may not grow on them with time. Will we get a Season 4 to wrap up another long list of loose ends? According to current network sources, we should not hold our collective breaths but with David Lynch, you just never know. In summation, Twin Peaks Season 3 is a provocative show that pushes the envelopes of creativity and credulity, and, as a most refreshing change, flies directly in the face of conventional network television.

Twin Peaks: The Return debuted on Showtime May 21, 2017 and has completed its season.

4 / 5 TheaterByte Rating
{{ reviewsOverall }} / 5 User Rating (0 votes)
David Lynch | Mark FrostShow Creator
21 May 2017Original Release Date
ShowtimeNetwork/Streaming Service
60 Mins.Ep. Run Time
18No. Eps.
Rancho Rosa Partnership Productions | Lynch/Frost ProductionsStudio/Distributor
TV-MA (Language, VIolence)Rating Certificate
The Creative Content
Summary
A continuation of one of television's quirkiest shows after a 25-year absence that will be welcomed by its many fans and puzzle the heck out of newcomers.
What people say... Login to rate
Order by: