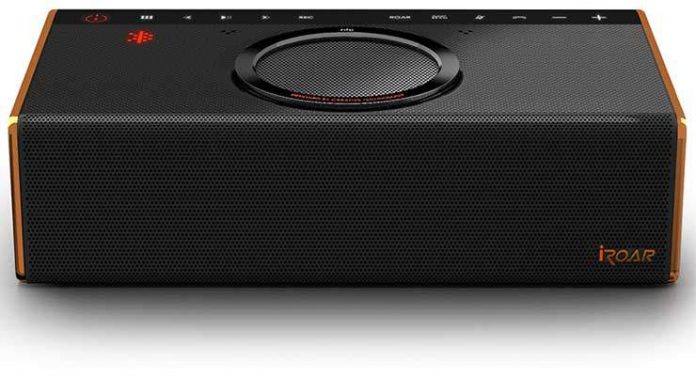 Damn, there are a lot of Bluetooth accessories out there. At CES a few months back, there were so many in fact that some industry chums invited me to tag along to an after-hours event that featured nothing but Bluetooth devices, and naturally a large contingent was wireless loudspeakers. While I won’t go so far as to dismiss Bluetooth speakers as having become commoditized, I do think it’s fair to say that if you want to stand out in this crowded marketplace, you need to offer value that the other guys don’t.

The Smartest Speaker in the Room

Modestly touted as The Most Intelligent Speaker on the Planet, the Creative iRoar builds upon the robust features sets of its predecessors, the Sound Blaster Roar and Roar Pro. So in addition to wireless pairing with your compatible device (with tap-to-connect NFC), we can expect integrated MP3/AAC/WAV playback via the microSD card slot, audio recording, a digital optical input, and more bulletpoints that I’ll get to shortly. The onboard DSP is Creative’s own multi-core, floating-point SB Axx1, working with a bi-amplified system: one amp for lows and the other dedicated to the midrange. The five-driver array includes two 1.5” high-frequency drivers and a 2.75” main driver plus a passive radiator on each end. The built-in lithium ion battery has a whopping 9000mAh capacity, for up to 20 hours of playtime, and it can even charge other devices via its 1.5A output.

Like most of the Bluetooth speakers I’ve reviewed, it’s also a speakerphone with a built-in microphone, but this one brings a bit of fun by adding an assortment of interesting voice effects. Those looking to accessorize further can try the optional Creative iRoar Mic ($79.99), a “wireless voice projector” (with “Emotion Amplifier”) that that repurposes the iRoar as a mobile PA system. The Mic is small enough to clip onto a lapel, and smart enough to pair quickly and reliably, and then subtly enhance the voice of the presenter. It was used extensively at the Creative booth at CES and it indeed commanded the attention of the teeming throng in one of the noisiest areas of the show floor. It’s also karaoke-ready.

iRoar can be wired to a second iRoar in a “MegaStereo” configuration for more power and greater separation, if so desired. While I didn’t try that, I did demo the speaker with the optional Creative iRoar Rock docking subwoofer ($149.99). There is no remote control for either product—and no on-unit controls for the subwoofer other than power—rather we are invited to download a couple of apps and use our connected phone or tablet to tap into the iRoar’s potential. The Remote Assistant app can govern music playback and volume, and it receives information from the speaker as well, giving updates on the battery level, for example. The iRoar Dashboard app transcends mere streaming of Bluetooth audio, packing an equalizer for the bass and treble, “Immersion” for a simulated 360-degree sound, and “Dialog+,” which increases vocal clarity in particular. Those are in addition to a half-dozen application-specific modes: BlasterX, Game On, Audiophile Bliss, Cinemania, Sonic Bass and Live Concert. A Roar/Active setting also boots overall loudness. Poking around the Dashboard app yielded lots of methods to customize the audio in noticeably different ways. It helps manage tasks like firmware updates, too. There’s also a long list of free companion apps called Add-Ons that do everything from roll virtual dice to play nature sounds to help tune a guitar to share famous quotes and trivia. These require a microSD card for their small data download.

On its own, the iRoar plays at respectable volume, with a surprising amount of bass cranking from the top-firing active driver. With the volume of both the speaker and my Android phone at max levels, I noted some crowding in the highs, but it’s a solid performer overall on a range of music in various formats, from highly compressed MP3s to audiophile FLACs. This is in addition to touch-sensitive controls atop the unit that light up and react in their own (mostly) self-explanatory way. The speaker provides a bit of spoken feedback too, at power-up and other moments, sometimes with a hint of attitude: “The iRoar is docked, and ready for action.” I like that.

The handsome bronze accents give it a distinctive look, while the larger—and hefty—Rock subwoofer displays an understated wood grain and classy black gloss trim, a stylish complement. The docking per se involves what appears to be a proprietary eight-pin connector. The Rock is the first entry in what Creative is calling the “iRoar ecosystem,” with the versatile iRoar speaker at the center. As a bonus of sorts, the dock enables FastCharge, delivering a full top-off of that 9000mAh power cell in three hours or less.

Now, if I liked the sound of the iRoar solo, I like the sound of iRoar + iRoar Rock combo a lot. Creative calls this Voltron-type magic “BlasterX Immersion Technology,” taking the virtual surround of the iRoar a step further with a wider soundfield. Enlisting the 3.75” front-firing driver of the Rock plus its right-side port, the docked iRoar speaker system renders an undeniably room-filling sound stage for small to medium-sized spaces. While expanding the bass in a profound way, it also has the effect of enriching the trebles on down. No, the highs are still not what I would call spacious, but the midrange is solid and the bass is mighty and musical. In short, this combo kicks. And although it might not be the ideal delivery solution for blockbuster soundtracks, it is a fine vessel for the variety of movie content that I tried, with clear definition of dialogue, music and effects. That’s good news not only for the streaming crowd but for the home theater, as more TVs are now offering Bluetooth connectivity as an option for outboard speakers.

Creative iRoar Bluetooth Speaker (TheaterByte Gear Review)
4.7 / 5 Reviewer
{{ reviewsOverall }} / 5 Users (0 votes)
Creative LabsBrand
us.creative.comWebsite$369.99MSRP
Pros
Cons
Summary
The audio performance of the Creative iRoar Bluetooth speaker did not disappoint and the depth of features is as impressive as we’re likely to see this year. While it is among the pricier models currently available, its combination of sound quality and functionality are hard to match.
The Performance
Design/Ergonomics
Value
What people say... Login to rate
Order by: