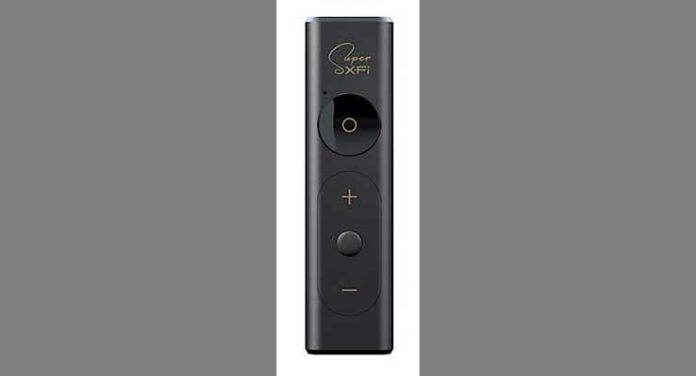 As someone who was once all-in with the iPod, I marvel at how the smartphone has made the once-ubiquitous little media player nigh-obsolete, Apple’s recent refresh of the iPod touch notwithstanding. Just about everyone I know uses a smartphone for almost all of their media consumption outside of the living room (with plenty of folks staring at the little screen even when the TV is on, too), but are they getting the best entertainment experience? Screens have become amazing, with some spec’d out like handheld versions of a Full HD television or better. But despite advances in onboard DACs, portable audio can often be lackluster.

For those looking to significantly enhance their on-the-go sound, Creative recently introduced their Super X-Fi line. I reviewed the SXFI AIR Super X-Fi Bluetooth Headphones, a complete solution with the exclusive new Creative Super X-Fi UltraDSP chip built into over-ear wired/wireless cans. Its companion is the SXFI AMP Super X-Fi Amplifier, a simple-to-use plug-and-play audio accessory that offers three important functions. It contains its own high-fidelity AKM AK4377 digital-to-analog converter (DAC), which conveniently and automatically bypasses the DAC inside our smartphone. As the name suggests, it is also a very capable amplifier, a boon to anyone seeking greater volume. Lastly and perhaps most important, that exclusive UltraDSP seeks to recreate audio closer to the way people actually hear it, moving the soundfield and away from the ear canal and giving the illusion of three-dimensional space. Beyond simple reverb, which can adversely affect the character of the sound, Creative’s virtualization and positional audio can create a convincing immersion via a combination of signal analysis and interpretation, plus head mapping for each listener. All of that data is then mated with the parameters of a theoretically ideal listening room, for music listening and video watching.

The company is no stranger to headphone amplifiers and USB DACs, but this is the first product to combine the functionality of both with UltraDSP, and it does so in form factor even smaller than I was expecting. The matte black, anodized aluminum unibody chassis measures about the size of my pinkie, or perhaps a three sticks of gum (Juicy Fruit, not Trident).  In fact, the first time you think you’ve lost it, first check to see if the little guy is still connected to your phone or dangling at the end of your headphone cable before you freak out. Not that that happened to me. Just a thought.

On-unit controls are minimal: volume up/down with an unmarked play/pause stud in between, plus a button to switch the Super X-Fi processing on and off (the green LED means on, amber is standby).

There’s a 3.5mm stereo audio jack on one end and a USB Type-C port on the other, to connect to the phone. Does it work with iPhone? Yes and no, as Creative explains: “While the SXFI AMP was not designed for iPhones, iPhone users who wish to use Super X-Fi technology with their own headphones can use the SXFI AMP through a Lightning to USB Camera Adapter from Apple, and a USB A-to-C Adapter,” neither of which are included in the little box. Owing to its compact design and ability to mate with any headphone, and using just the short, two-headed USB-C cable it arrived with (plus a micro USB adapter for older smartphones/tablets), I am approaching this as an Android accessory review, tested primarily on an LG V20 phone.

The journey begins with the SXFI app via Google Play. Setup is pretty straightforward, including the capture of a “head map” from shots of our unique ears and face, for true customization. That personalized data is then applied and stored in our Super X-Fi account. The app arrives pre-loaded with dozens of profiles for different makes and models of cans or ‘buds, some Super X-Fi-certified, to further tune the sound. The level of Super X-Fi enhancement per se is all or nothing (press that physical button or click within the app), although there is also a built-in EQ with a touchscreen interface. It defaults to “Flat,” with Classical, Pop, Game and Cinema modes available, plus custom treble and bass options. The app has its own music player function as well, which I found to be a little clunky, but the AMP will work seamlessly with whichever music app we choose.

Delaying this review somewhat was a discovery I made, similar to the new reality faced by iPhone 7 owners a few years ago: After their headphone jack disappeared, the Lightning connector was needed to attach wired headphones. Here, the AMP monopolizes the USB Type-C port in my Android phone, so I can’t charge it as long as the AMP is connected, and the AMP does draw its modest amount of power from the phone. To be fair, that’s more of a concern for my long days of reviewing, especially when streaming audio/video, but should not pose a major problem for the typical music listener. One handy upside: The USB connection to an internet-connected phone makes firmware updates quick and easy, and I performed one right away.

One of my first objectives was to test this thing’s “heavy lifting” capabilities, to really hear its benefits as an amplifier. Among my biggest pet peeves about my phone is its disappointing volume level, even when cranked up full and the hearing damage warning appears. Could SXFI be the remedy? Creative touts 3X amplification gain from this little guy, able to support even studio-grade headphones with impedances up to 600 ohms. I don’t have any of those on-hand at the moment, in fact I used a pair of the new Creative Aurvana SE for much of my listening. This is an upgraded version of the extremely popular Aurvana Live cans that I’m pretty familiar with, with some subtle upgrades to the design and build including a thicker outer shell for better isolation to help make them Super-X-Fi-certified. (They’re sold separately but as of press time they were on sale.)

Now, we should all take care of our ears and I’m not suggesting otherwise, however sometimes a person just wants to crank his tunes, and with the SXFI AMP, I feel like I truly can for the first time on this phone. How loud does it go? Genuine pain was achieved, even before I hit 100%. Which is terrible. And wonderful at the same time.

So, brute force is a definite win. What about the finesse? To be fair, the AMP’s 32-bit 128dB AKM digital-to-analog converter and the ESS Sabre 32bit Hi-Fi QuadDAC inside my phone that was superseded are both solid, and it would be folly to try and point out nuances between the two as they crunch compressed and streamed audio. Suffice it to say, the new AKM DAC is extremely capable and issue-free, and depending upon the DAC inside your Android phone, this could well represent an upgrade. Which brings us to the UltraDSP chip, and its mission to expand the soundfield away from our ears with depth, detail and a best-yet sense of realism. Here again, it’s a victory for Creative.

As they rely upon the same technology, audio performance of the AMP is largely the same as that of the AIR headphones, so we’re back to the main difference: the freedom to choose any headgear we like. Finally found your favorite hardware in terms of highs? Bass reproduction? Comfort?  Social status? (You know who I’m talking about.) Keep rocking ‘em, now stacked with the advantages of the AMP.

As we would expect, Creative’s UltraDSP chip works much harder on heavily compressed sources such as MP3s and streaming audio. What it’s actually doing, if you will, is making a buttload of informed guesses as to how a song should sound, then applying those adjustments in real time. The result is a pleasing new fullness and indeed shifting the audio into three-dimensional space. Vocals in particular now sound less constricted. I listen to a lot of ‘70s and ‘80s tunes and electronic instruments tend to sound less noisy and more musical with SXFI engaged. Drum hits in particular take on a lovely physicality, as if we can actually feel the air shake. On my FLAC tracks, the difference is less blatant since the quality is already quite high, although the simulation of distance and natural environmental ambiance are rather enjoyable. Movie soundtracks can be so incredibly sophisticated in their creation, it’s a shame to crush them down to lackluster stereo in the streaming/download age, but with SXFI I found them to be more lush, spacious and detailed.

Since this is the review of a phone accessory, I made a few calls and the AMP makes a big difference, creating the impression that the caller is sitting in front of me, rather than his voice firing directly into my ear.

As I said earlier, the SXFI AMP does not rely as heavily upon reverb as solutions of the past to achieve its immersion, although close listening can still reveal some of that telltale artificiality at times, and that’s not for everyone. The level of the Super X-Fi effect can’t be ratcheted down, however it can be switched off if so desired, and that still leaves us with the dual benefit of a high-quality DAC and mighty amplifier combined.

Onboard phone audio has gotten better but there’s still room for improvement, and if an exceptional Android experience is your goal, I can heartily recommend the Creative SXFI AMP.

4.2 / 5 Reviewer
{{ reviewsOverall }} / 5 Users (0 votes)
CreativeBrand
https://www.creative.comWebsite
$149.99MSRP
Summary
The smartphone is king. Ever wish it could sound better? Creative recently introduced their Super X-Fi line and the simple to use SXFI AMP Super X-Fi Amplifier for Android users, and if an exceptional Android experience is your goal, I can heartily recommend the Creative SXFI AMP.
The Performance
Design/Ergonomics
Value
What people say... Login to rate
Order by: