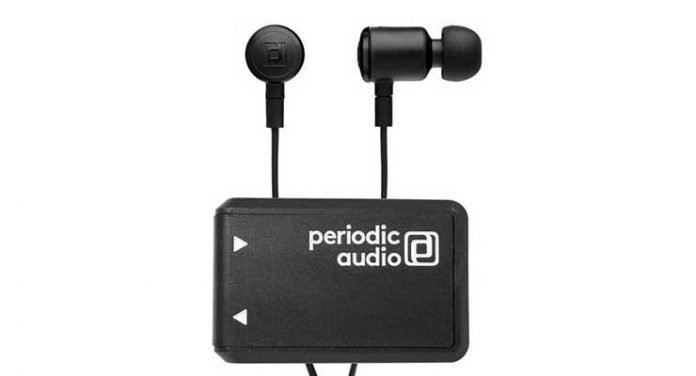 My first earphones were included with the transistor radio kit that I built for “private” listening, i.e., no parents allowed, in the summer of 1958. Actually this was a “mono” earpiece that I could attach to the radio jack, slide its cord up my sleeve, and, cleverly concealed by my palm placed against my ear, it looked like I was paying attention (not!) to what the adults in the room were saying.

Fast forward sixty years and I have probably had some kind of earpiece, earphone or, to co-opt the current nomenclature, an “in ear monitor” (IEM) in my ear canals on a regular basis. A couple of years ago, I enjoyed listening to a trio of Periodic Audio’s initial IEM offerings that respectively used either magnesium, titanium or beryllium in their dynamic driver diaphragms. What followed was a pleasant excursion through a variety of sound environments that peaked at the top of the line “Beryllium” IEM.

Not content to rest on their laurels, Periodic Audio has introduced its new flagship IEM, the Carbon or “C”. According to the company brochure, the C “utilizes a lab-grown diamond layer (8 microns) on our own proprietary high-temperature polymer substrate…. The sonic signature of the C IEM is an interesting mix of Ti and Be, with the enhanced bass response of Ti but the high-end extension of Be. It is well-suited for electronic music or anything with fast transients and extremely wide frequency response. C has the lowest THD of any IEM we have made, by a fairly wide margin.”

Like its predecessors, the C features a polycarbonate body for high strength and zero resonance, custom front-and-rear tuned volumes, MIM logo caps, butyl rubber strain reliefs, and N48H grade magnets. As our ear canals vary in size and depth, Periodic Audio offers a variety of tip sizes that include single-flange silicone, and dual-flange silicone. The 10 mm drivers are housed in low-resonance polycarbonate and the 1.6-meter copper Litz cable is shielded by a jacket of polyethylene terephthalate and terminated in a 3.5 mm plug made of gold-plated brass. All accessories are housed in a smart “gold” pill-style box that has room for the earphones and offers a dual plug adapter for those pesky stereo inputs on some domestic and international commercial aircraft. Also like its predecessors, each earphone carton is labeled with periodic table abbreviations, in this case “C,” its atomic number and weight, and a print out of specifications and frequency response curves.

I mated the Periodic Audio Carbon IEMs at different points in time with my reference Astell & Kern AK240 digital player, an iPhone 7, and a newly acquired MacBook Pro 2ndgeneration. To make matters more interesting, Periodic Audio also sent me their new “mini-amplifier” AKA “Nickel” as a potential mate for their IEMs. Once again, the PA publicists were up to the task of extoling the virtues of this matchbook-sized marvel. This little guy puts out more than 250mW per channel into a 32 Ohm source with 6.5 dB of gain. Like the earphones, this is a plug-and-play device that connects via 3.5 mm plugs into the source with a comparable receptacle for the IEMs. The 30-minute charge cycle (via a supplied mini-USB connector) brings 8 hours of uninterrupted listening. Oh yeah, you can charge and listen at the same time.  Fully charged goes green, while needs a charge goes red on the unit’s front-mounted LED.

During the review, I listened to the Carbon with and without the Nickel. For comparative purposes, I also used the now-discontinued and comparably priced Shinola Detroit Canfield IEMs (these are actually 100 bucks less) and my reference IEMs, the Astell & Kern AKT8iE MII (nearly three times as expensive). Because, the Carbon comes with a number of silicone earpieces, it is important to find the ones that make the best and tightest fit for your ears as this will have significant impact on the seal needed for best bass response.  I ended up with the largest ones that were quite comfortable over the hours of listening that followed. The playlists included the following tracks:

The Carbon IEMs were an obvious cut above the Beryllium (which I still have) in terms of spaciousness and low-frequency response that I got on Esperanza Spalding’s duet with Gretchen Parlato, backed only be her expressive bass instrument. The heart-stopping drumbeats that open “Hotel California” were palpable and well-articulated. I am a self-confessed vocals freak and the warmth of Diana Krall’s husky pipes was reproduced with conviction and pinpoint accuracy. Ditto for Jacintha’s ethereal rendition of the Karen Carpenter favorite, “A Song for You”. Even mp3 files like “Saturday Night” sounded better than they had any right to sound on my iPhone 7.

While I clearly expected files played from my AK 240 (unbalanced out) to sound the best through the Carbon, I was also concerned about the impedance mismatch (1 Ω for the AK, 32 Ω for the IEMs). This turned out not to be an issue but what emerged through listening to the same files on my MacBook Air was how good they sounded with the Carbon IEMs.

A Nickel for Your Thoughts

When I took the Nickel amplifier out of its box, I harbored no great expectations for its impact on the sound delivered through the Carbon or the other two IEMs that I used in this review.  Boy, was I ever wrong! Plugging the Nickel into the output of each sound source and then linking it up initially with the Carbon was a real ear-opener. The soundstage became huge, bass was deeper and better defined and the vocals simply exploded into my head. This was the case with every cut, but particularly those with the multiple background voices on “When You’re Young and in Love” and “Diamonds on the Soles of Her Shoes.” The Nickel also made even my lowly iPhone sound way bigger than I know that it really is and worked its magic on each of the other IEMs that I connected to it. This turns out to be good news for the Periodic Audio folks since it means that if you own other brands of IEMs, this $299 investment will yield great returns.  There are limits to what this mini-amp and its 250 milliwatts can do—it never made my crappy plastic Apple earbuds sound like audiophile in-ear transducers.  Aside from that, once I hooked the Nickel up to the Carbon, I had no desire to listen to these IEMs without it.

If you do the math, the Carbon plus the Nickel will set you back $700. If you put this combination up against the higher priced IEMs like my reference AKT8iE MIIs, this becomes a very wise buying decision that will give you an extra $300 to invest in downloads or whatever floats your listener’s boat. Highly recommended and another tip of my official reviewer’s cap to the folks at Periodic Audio.

Periodic Audio Carbon & Nickel are available for purchase now at online retailers such as Amazon and others.