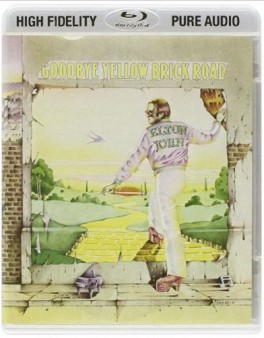 Four of the seventeen cuts on the extensive playlist went on to become monster hits: “Candle in the Wind,” “Bennie and the Jets,” “Goodbye Yellow Brick Road,” and “Saturday Night’s Alright for Fighting.” The remaining thirteen tracks are anything but chopped liver and well worth hearing.

While not a concept album like Sergeant Pepper’s Lonely Hearts Club Band, GYBR runs the gamut of Sir Elton’s musical expression, mixing rockers like “Saturday Night’s Alright for Fighting” or “Your Sister Can’t Twist” with soulful ballads like “Candle in the Wind” or “Roy Rogers.” There are also novelty items such as “Jamaica Jerk-Off” (with its infectious reggae beat), torch songs, “I’ve Seen That Movie Too,” an anthem to hookers, “Sweet Painted Lady,” and a commentary on down-and-outers, “Dirty Little Girl.” With GYBR, John extended his coverage of contemporary society and its rapidly changing mores that preceded his personal catharsis that culminated in his eventual coming-out-of-the-closet.

The DTS-HD Master Audio 5.1 surround soundtrack offers immersive sonic experiences with back up vocals and other instrumentals frequently appearing in the surround channels. This 2003 Greg Penny mix will most definitely appeal to listeners who love their music in the round. For two-channel aficionados, the three high-resolution choices of LPCM, DTS-HD Master Audio or Dolby TrueHD are all  excellent as might be expected, coming from Bob Ludwig’s legendary studio, and are a much closer representation of my original double-fold two-LP set that I have loved for the past four decades. The “High Fidelity Pure Audio” Blu-ray takes what was already a fine sounding album and gives us superb percussion, deep but clear bass and pristine vocals.

Universal Music provides a booklet with lyrics and the same illustrations that accompanied the original LP set.

Goodbye Yellow Brick Road has been on Rolling Stone’s short list of top rock ‘n roll albums of all time and deservedly so. While there is the expected unevenness in the creative genius that was and still is Sir Elton John, even modest fare like the closing track “Harmony” is leagues beyond so much of the drivel that passes for today’s pop music. Listening to this album as a whole, with its varied tempos and themes, one gets the full palette of what has made Elton John one of the true musical icons of our times. With a full menu of sonic choices (and with my stated preferences for the new 2-channel versions), I do not think that we will get a better presentation of this album in the foreseeable future. Run, don’t walk, to get this one while it is still hot.