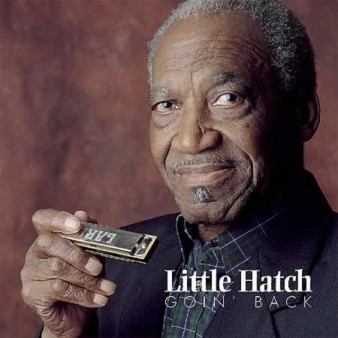 When Analogue Productions’ founder, Chad Kassem, started his personal mission to rediscover venerable old blues performers, and opened his Blue Heavens Studios in Salinas, Kansas, he found local blues legend, Provine “Little” Hatch, Jr.  Little Hatch began his career in Mississippi and moved to Kansas City, Missouri after World War II. LH became a fixture on the local blues scene but made relatively few recordings. In 1998, Kassem persuaded Little Hatch to come out of retirement (he was nearly 80 years old) and cut some tracks (actually 15) with sideman guitarist Bill Dye for AP Records. What will amaze listeners is the musical power that Little Hatch still possessed and, of the twelve tracks included on the DSD download, most were first takes.

As the title, Goin’ Back, suggests, the playlist is a mini-catalog of some of the greatest blues standards including a Hatch original  “Long As My Right Arm”:

An hour-long adventure in time-travel goes by at high speed with music and performances that are just that good.

Although this album was one of the earlier efforts at Blue Heavens Studios, it is a technically accomplished recording in all respects. I happened to have the CD version that I thought was an excellent Red Book effort (and it is). Taking on my favorite cut, “The Sky Is Crying, ” for comparison, the DSD had a more naturally sounding recreation of voice and guitar and capture of Little Hatch’s foot stamping on the stage. This observation was true of the other tracks as well. But it gets even better. I also had the APO LP (I really like Little Hatch!) and put it up against the DSD. Now matters were not as clear as they had been during the CD-DSD shoot out. I felt that I was really comparing superb sound with superb sound. All of the properties that made me prefer the DSD to the CD were also present in the vinyl disc with the latter exhibiting slightly more air and warmth (but it was very, very close). However (and for me this is a major however), the LP has only nine cuts, lacking (you guessed it) “The Sky Is Crying.”

There are some fabulous liner notes from John A. Brisbin that give us a real picture of who Little Hatch was (he died in 2003) along with a playlist and recording credits. Cover art is also provided.

Like some of the other blues greats “discovered” by Chad Kassem, Little Hatch may one of the greatest performers that you never heard of. Lucky me, since I have  had the Analogue Productions LP for years. As good as the CD is, I never really warmed up to it like I did to all of those mysterious vinyl grooves. Now we have a worthy alternative, complete with my favorite track. I will go on “record” and state that if you can only buy one blues album this year (I hope that this is not true for most of you), make it this one. In the words of another blues great, “‘nuff said”.