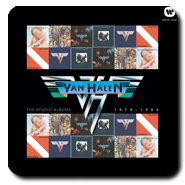 Van Halen  (actually there are two Van Halens in this iconic rock n’roll group, brothers Eddie and Alex) hit the big time when they recruited power singer David Lee Roth and bassist Michael Anthony.  Legendary manager/recordist Ted Templeman signed VH to the Warner Bros. label and their eponymous Van Halen was released in 1978.  A multi-million seller, with hits like “Runnin’ with the Devil,” Jamie’s Cryin’,” and “You Really Got Me,” this album led the charge and everything else just followed. The group’s second album Van Halen II, was released in 1979, with the infectious hit, “Dance The Night Away,” reaching No. 6 on the Billboard Top 200 list. Women and Children First hit the charts in 1980 with “And the Cradle Will Rock,” and  “Could This Be Magic,” also landing at No. 6.  In 1981, Fair Warning solidified the group’s status as a top rock n’ roll act. Diver Down was released the following year with group’s pounding coverage of the Roy Orbison classic, “(Oh) Pretty Woman,” driving the album to No. 3. Of course, 1984 blasted to the very top of the charts led by the band’s dance favorite, “Jump.”

An easy choice for the Rock and Roll Hall of Fame in 2007, Van Halen has survived personnel changes (Roth left after 1984 but was successfully replaced by Sammy Hagar). Van Halen pressed on in the new millennium with monster tours. Many die-hard VH fans will doubtless consider the first six studio albums as offered in this collection to represent the high water for these talented rockers. The complete 60-cut collection is listed below:

So how good are these 192kHz/24-bit remasters? I had most of these albums on vinyl once upon a time and foolishly parted with them when the 2000 reissued CD (HDCD) versions hit the music shop racks. Well, we all make mistakes, as I found the CDs to be compressed, often disappointingly so, when compared with their analog predecessors. As a rule, this is loud, often very loud, in-your-face music, and, 30-year old aural memories aside, these digital downloads albums sounded at least as good as I remembered their vinyl counterparts to be. This is not surprising since the downloads were sourced from the original EQ analog master tapes. Most cuts are very dynamic and room-filling, but not shy on detail. If you listen to “Big Bad Bill (Is Sweet William Now)” or “Could This Be Magic,” you get rare acoustic moments that are crystal clear. Of course, there is 1984’s “Jump” (not my favorite VH number) with its incessant synthesizer ground at least as listenable as I have heard it. Thankfully, this last album’s big percussion opening of “Hot For The Teacher” gives us what we really expect from Van Halen.

Unfortunately, all we get for our money is cover art where liner notes would have been most welcome to VH veterans and newcomers alike.

Metal might not be to everyone’s liking, but this group plays it as well as any of the ‘80’s head-banging rockers. Taken individually, the original Van Halen featured some damn good musicians who could play just about any musical genre. This reissue gives listeners a generous collection of some of the best VH numbers. If the original releases were not the very last word in audiophile recordings (and they were not), here they are given a strong remastering effort, particularly in the 192kHz/24-bit versions supplied for this review. As this is being written, Warner Bros. has released this six-album set as a deluxe CD box, going for about half of the price of this HD download collection. Really, 44.1 kHz/16-bits rather than 192kHz/24-bits, anyone?  Taken as a 3-hour sitting and frequently ear-bleeding orgy, or sampled cut-by-cut (what I would recommend), this is probably as good a way as any to get reacquainted with some true American rock n’ roll legends. We can’t relive our lost youth, but Van Halen Studio Recordings 1978-1984 takes us back there, at least for a few hours. Thanks, Rhino/Warner Bros; thanks, HDtracks.