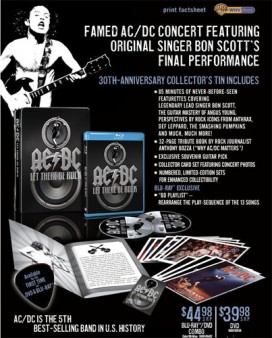 Attention all AC/DC fans, Warner has announced the forthcoming release of the classic AC/DC concert featuring the late lead singer Bon Scott’s final performance, Let There Be Rock, on Blu-ray and DVD for June 7. The concert will be available in a 2-disc Combo Pack (Blu-ray+DVD) at an SRP of $44.98 and 1-disc DVD at an SRP of $39.98.