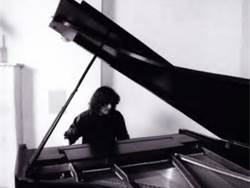 A bit less than a year later, Blu-rayDefinition has caught up again with innovative American composer, David Chesky.  Chesky is also a jazz pianist and infuses his music with jazz figures and dance rhythms. In our last interview we discussed several new concertos, collected in String Theory, and now, there is a new high-resolution download, The New York Rags, also reviewed on our site.

Lawrence Devoe: The obvious opening question: what inspired you to take on The New York Rags project?

David Chesky:  Last summer I was listening to Dick Hyman’s recording (Dick Hyman Plays Duke Ellington, Reference Recordings].  Inspired by this music, I wanted to give a shot at writing piano rags.  A month later, I had eighteen of them.

LD: I can hear some of the more obvious influences in these compositions as noted in their titles, specifically those dedicated to Leonard Bernstein and Duke Ellington. Can you tell me what other composers played a part in inspiring these works?

DC: My writing is a fusion of American jazz and modern classical harmony, so my foundation comes from Stravinsky, Bartok, Gershwin and Bernstein.  All of these composers influence me. I fused my harmony with stride piano style: bass on first and third beats, melody on the second and fourth beats. Musically, we are a culture of syncopation. We have to incorporate it and nurture it. Today’s music, jazz, pop, and other types also play strong parts in what I write.

LD: I am fascinated by some of the titles given to your pieces. Clue me in on the ones not associated with places like Thanksgiving Day Parade or Kids, You’re Late for School.

DC: I always watch the Thanksgiving Day Parade with my kids and, I put the “Old MacDonald had a Farm” theme in the middle of this piece. Kids, You’re Late for School is my life every day, getting my six year-old twins to school.

LD: Chesky Records has always been associated with the highest quality recorded sound on its CDs and downloads, regardless of resolution. Given the wide selection of pianos that are out there, why did you choose the Yamaha Disklavier.

DC: This piano is a recording system, and can be used as a player piano. Player pianos are precise. You can compile the whole recording over time, and just say to the engineer, “Hey, you record it.” Normally, you do about nine million takes. This way you can make the recording without tiring out the piano player.

LD: The 3D3A recording technology, at least from my listening perspective, seems to be a cutting-edge process for enhancing sonic realism. What do you see as the future for this technology and will you be making future recordings with 3D3A?

DC: I hope so. You are at a concert and your right ear hears the tuba before the left, while the left ear hears the violin before the right. At a concert, you have visual cues that help to locate the instruments. In a stereo system there is corruption that destroys the 3D effect of a live performance. You also lack the visual cues that assist with identification of instrumental location. When you play back a sound recording with a cross-talk filter, you get the density of the live performance restored.

LD: A final question for you, David. Are there some new Chesky works looming ahead for us to hear and enjoy?

DC: On September 15, 2013, my ballet will debut. It is a children’s ballet, Zephyrtine. I also have a jazz record coming out [Jazz in the New Harmonic on www.HDTracks.com]. A “rap” symphony is also in the works.

LD: Again, on behalf of Blu-rayDefinition, thank you for taking the time for talking with me. I am looking forward to hearing your latest release as soon I can download it.