Bridesmaids on Blu-ray in September 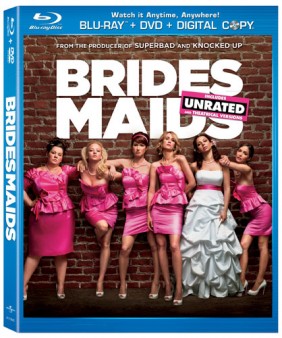 See press release below for special features and further details.

“If This is Only a Chick Flick, Then Call Me a Chick!” – Joe Morgenstern, The Wall Street Journal

Say “I Do” to the Blu-ray™ and DVD Combo Packs Featuring an Unrated Version of the Film Not Seen in Theaters Plus More than Three Hours of Laugh-Out-Loud Bonus Materials!
Also Available on DVD, Digital Copy and Digital Download

Join the wildest wedding party of the year when Bridesmaids marches down the aisle to Blu-ray™, DVD and digital download on September 20, 2011, from Universal Studios Home Entertainment.  Hailed as “brazenly hysterical” by People Magazine and “the best comedy of 2011” (Back Stage), Bridesmaids is the riotously funny and warmly outrageous comedy that has become the most talked about movie of the year.  Critically acclaimed by fans and media alike, the “certified fresh” film (Rotten Tomatoes.com) received “two thumbs up! ®” from Ebert Presents.  Surpassing Sex and the City as the number one R-rated female comedy of all time, Bridesmaids starring “Saturday Night Live” standouts Kristen Wiig and Maya Rudolph, is produced by comedy mastermind Judd Apatow (Knocked Up, The 40-Year Old Virgin) and marks his most successful film ever.

Wiig and Rudolph are joined by an all-star comedy cast including Rose Byrne (Get Him to the Greek, “Damages”), Melissa McCarthy (“Mike and Molly,” “Samantha Who?”), Wendi McLendon-Covey (“Rules of Engagement,” “Reno 911”), Ellie Kemper (“The Office,” Somewhere), Jon Hamm (“Mad Men,” SuckerPunch), and Chris O’Dowd (“The IT Crowd,” Pirate Radio).  Directed by Paul Feig (“Nurse Jackie, “Arrested Development”) and written by The Groundlings comedy veterans Annie Mumolo and Kristen Wiig, Bridesmaids is the must-own comedic phenomenon that fans will want to watch again and again!

The perfect gift or movie for a fun night in, consumers can own Bridesmaids in multiple formats, including Blu-ray™ Combo Pack, DVD Combo Pack, DVD and Digital Download.  Featuring spectacular high-definition picture and the purest digital sound, the Bridesmaids Blu-ray™ and DVD Combo-Packs include both a Blu-ray and DVD PLUS a digital copy of the movie that can be watched anywhere, anytime, on consumers’ choice of devices including laptops, tablets, smartphones as well as Internet-connected TVs and Blu-ray™ set top boxes. The Blu-ray™, DVD and DVD Combo Packs each include an all-new, never-before-seen unrated version of the film as well as feature the original theatrical version. Additionally, the Blu-ray™ and DVD Combo Packs are loaded with nearly three hours of bonus features, deleted scenes, a gag reel, a Bridesmaids “Making Of,” featurettes, and much, much more.  There’s no better way to enjoy this instant classic!

SYNOPSIS
“Gut-bustingly funny!”(Owen Gleiberman, Entertainment Weekly) From the producer of Superbad, Knocked Up and The 40-Year-Old Virgin comes the breakout comedy critics are calling “brazenly hysterical!” (Alynda Wheat, People). Thirty-something Annie (Kristen Wiig) has hit a rough patch but finds her life turned completely upside down when she takes on the Maid of Honor role in her best friend Lillian’s (Maya Rudolph) wedding. In way over her head but determined to succeed, Annie leads a hilarious hodgepodge of bridesmaids (Rose Byrne, Melissa McCarthy, Wendi McLendon-Covey and Ellie Kemper) on a wild ride down the road to the big event.