Bryan Ferry: Live in Lyon on Blu-ray in September

Eagle Rock Entertainment will release Bryan Ferry: Live in Lyon on DVD, Blu-ray and Digital Formats on September 24, 2013. Additionally a Deluxe Edition is available on each format, boasting a 72 page hardback edition with embossed front cover and bonus CD of the concert. MSRPs, for each format are as follows: $24.98 Blu-ray, $14.98 DVD, $69.98 Blu-ray/CD, $59.98 DVD/CD. See below for further details.

New York, NY (September 9, 2013)— Eagle Rock Entertainment is proud to announce the release on September 24 of Bryan Ferry’s Live In Lyon on DVD, Blu-ray and Digital Formats. Additionally a Deluxe Edition is available on each format, boasting a 72 page hardback edition with embossed front cover and bonus CD of the concert. MSRP $24.98 Blu-ray, $14.98 DVD, $69.98 Blu-ray/CD, $59.98 DVD/CD. 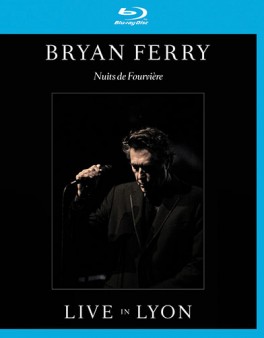 From his earliest recordings with Roxy Music at the beginning of the 1970s, Bryan Ferry has established himself as one of the most iconic musicians and innovative songwriters to emerge in popular music. This spectacular performance, which was part of his worldwide Olympia tour, was filmed on July 25, 2011 at the ancient Roman amphitheatre in Lyon, France as part of the Nuits de Fourviere Festival.

Live In Lyon shines with tracks from across Ferry’s 40-year career including classic Roxy Music songs, solo hits and his renowned interpretations of classic songs. Tunes such as “Slave To Love,” “Oh Yeah!,” “Let’s Stick Together,” “Love Is The Drug,” “Don’t Stop The Dance,” “Avalon,” “Like A Hurricane,” “Sign Of The Times,” “If There Is Something,” “Jealous Guy,” and “My Only Love,” are all delivered with the style and panache that is uniquely Bryan Ferry.

Live In Lyon also includes “The Making Of Olympia” film as a bonus feature. This brilliant documentary unveils the recording of the Olympia album with previously unseen interviews and performances with guest artists including Nile Rodgers, Dave Stewart, Marcus Miller, David Gilmour, Flea and The Scissor Sisters.

Live In Lyon is a music experience no Bryan Ferry fan should be without.