Criterion Collection has announced their lineup of titles for the holiday season and it is strong one. The list includes Robert Altman’s 1975 classic Nashville as well as a collection of lesser-known films from around the globe courtesy of the Martin Scorsese World Cinema Project collection. See below for complete details and artwork. 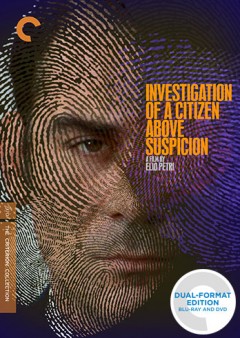 The provocative Italian filmmaker Elio Petri’s most internationally acclaimed work is this remarkable, visceral, Oscar-winning thriller. Petri maintains a tricky balance between absurdity and realism in telling the Kafkaesque tale of a Roman police inspector (A Fistful of Dollars’s Gian Maria Volonté, in a commanding performance) investigating a heinous crime—which he committed himself. Both a penetrating character study and a disturbing commentary on the draconian crackdowns by the Italian government in the late 1960s and early ’70s, Petri’s kinetic portrait of surreal bureaucracy is a perversely pleasurable rendering of controlled chaos.

DUAL-FORMAT BLU-RAY AND DVD SPECIAL EDITION FEATURES
• New 4K digital restoration by the Film Foundation, with uncompressed monaural soundtrack on the Blu-ray
• Archival interview with director Elio Petri, conducted by critic and filmmaker Alexandre Astruc
• Elio Petri: Notes About a Filmmaker (2005), a ninety-minute documentary on the director’s career, featuring interviews with friends, collaborators, and filmmakers
• New interview with film scholar Camilla Zamboni
• Investigation of a Citizen Named Volonté (2008), a fifty-minute documentary about actor Gian Maria Volonté
• Music in His Blood, an interview with composer Ennio Morricone from 2010, conducted by film critic Fabio Ferzetti
• Trailers
• New English subtitle translation
• One Blu-ray and two DVDs, with all content available in both formats
• PLUS: A booklet featuring an essay by film scholar Evan Calder Williams and excerpts from a 2001 book by author and screenwriter Ugo Pirro 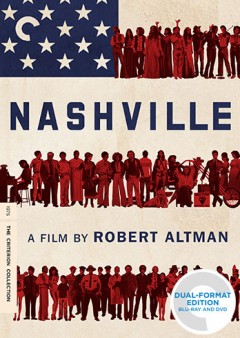 This cornerstone of 1970s American moviemaking from Robert Altman (Short Cuts) is a panoramic view of the country’s political and entertainment landscapes, set in the nation’s music capital. Nashville weaves the stories of twenty-four characters—from country star to wannabe to reporter to waitress—into a cinematic tapestry that is equal parts comedy, tragedy, and musical. Many members of the astonishing cast wrote and performed their own songs live on location, which lends another layer to the film’s quirky authenticity. Altman’s ability to get to the heart of American life via its eccentric byways was never put to better use than in this grand, rollicking triumph, which barrels forward to an unforgettable conclusion. 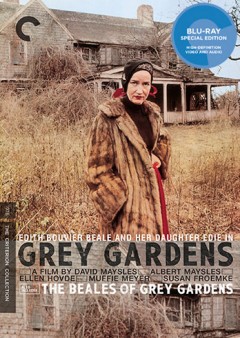 Meet Big and Little Edie Beale: mother and daughter, high-society dropouts, and reclusive cousins of Jackie Onassis. The two manage to thrive together amid the decay and disorder of their East Hampton, New York, mansion, making for an eerily ramshackle echo of the American Camelot. An impossibly intimate portrait, this 1976 documentary by Albert and David Maysles (Salesman), codirected by Ellen Hovde and Muffie Meyer, quickly became a cult classic and established Little Edie as a fashion icon and philosopher queen. This special edition also features the 2006 follow-up to the film, The Beales of Grey Gardens, constructed from hours of extra footage in the filmmakers’ vaults. 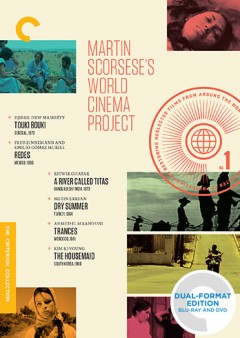 Established by Martin Scorsese in 2007, the World Cinema Project expands the horizons of moviegoers everywhere. The mission of the WCP is to preserve and present marginalized and infrequently screened films from regions of the world ill equipped to provide funding for major restorations. This collector’s set brings together six superb films from various countries, including Bangladesh/India (A River Called Titas), Mexico (Redes), Morocco (Trances), Senegal (Touki bouki), South Korea (The Housemaid), and Turkey (Dry Summer); each is a cinematic revelation, depicting a culture not often seen by outsiders.

TOUKI BOUKI
With a stunning mix of the surreal and the naturalistic, Djibril Diop Mambéty paints a vivid, fractured portrait of Senegal in the early 1970s. In this French New Wave–influenced fantasy-drama, two young lovers long to leave Dakar for the glamour and comforts of Europe, but their escape plan is beset by complications both concrete and mystical. Marked by dazzling imagery and music, the alternately manic and meditative Touki bouki is widely admired as one of the most important African films ever made.

REDES
Early in his career, the Austrian-born, future Oscar winner Fred Zinnemann (From Here to Eternity) codirected with Emilio Gómez Muriel the politically and emotionally searing Redes. In this vivid, documentary-like dramatization of the daily grind of men struggling to make a living by fishing on the Gulf of Mexico (mostly played by real-life fishermen), one worker’s terrible loss instigates a political awakening among him and his fellow laborers. A singular coming together of stunning talents, Redes, commissioned by a progressive Mexican government, was gorgeously shot and cowritten by the legendary photographer Paul Strand.

A RIVER CALLED TITAS
The Bengali filmmaker Ritwik Ghatak’s stunningly beautiful, elegiac saga concerns the tumultuous lives of people in fishing villages along the banks of the Titas River in pre-Partition East Bengal. Focusing on the tragic intertwining fates of a series of fascinating characters, in particular the indomitable widow Basanti, Ghatak tells the poignant story of an entire community’s vanishing way of life. Made soon after Bangladesh became an independent nation, the elliptical, stylized, painterly A River Called Titas is a grand epic from a director who has had a devoted following for decades.

DRY SUMMER
Winner of the prestigious Golden Bear at the 1964 Berlin International Film Festival, Metin Erksan’s wallop of a melodrama concerns the machinations of an unrepentantly selfish tobacco farmer who builds a dam to prevent water from flowing downhill to nourish his neighbors’ crops. Alongside this tale of soul-devouring competition is one of overheated desire, as a love triangle develops between the farmer, his more decent brother, and the beautiful villager the latter takes as his bride, resulting in a Cain and Abel–like struggle. A benchmark of Turkish cinema, this is a visceral, innovatively shot and vibrantly acted depiction of the horrors of greed.

TRANCES
The beloved Moroccan band Nass El Ghiwane is the dynamic subject of this captivating musical documentary. Storytellers through song, some with a background in political theater, the band’s members became an international sensation (Western rock critics have often referred to them as “the Rolling Stones of North Africa”), thanks to their political lyrics and sublime, fully acoustic sound, which draws on the Moroccan trance music tradition. Both a concert movie and a free-form audiovisual experiment, Ahmed El Maânouni’s Trances is cinematic poetry.

THE HOUSEMAID
A torrent of sexual obsession, revenge, and betrayal is unleashed under one roof in this venomous melodrama from South Korean master Kim Ki-young. Immensely popular in its home country when it was released, The Housemaid is the thrilling, at times jaw-dropping story of the devastating effect an unstable housemaid has on the domestic cocoon of a bourgeois, morally dubious music teacher, his devoted wife, and their precocious young children. Grim and taut yet perched on the border of the absurd, Kim’s film is an engrossing tale of class warfare and familial disintegration that has been hugely influential on the new generation of South Korean directors.