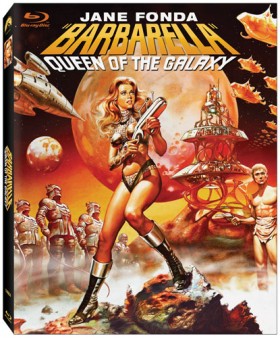 HOLLYWOOD, Calif. – Who can perform a zero-gravity striptease, seduce an angel and still have time to save the universe?  Sexy, sultry, space adventurer BARBARELLA, that’s who!  Coming in for a landing on Blu-ray for the first time ever on July 3, 2012, the terrifically titillating sci-fi romp BARBARELLA continues to entertain with its outrageous, out-of-this-world story and brazen sexuality.

Jane Fonda stars as the titular heroine who lands on the planet Lythion in the year 40,000.  Faced with robots, monsters and evil of varying stripes, she must vanquish her enemies, all while attempting—and failing—to keep her skin-tight spacesuit on.  Along the way she receives assistance from a variety of handsome men, each of whom receives her uninhibited appreciation. Directed by Roger Vadim (Fonda’s ex-husband), BARBARELLA is a kind of sexual Alice in Wonderland of the future and the film is replete with psychedelic set designs, far-out characters and an outrageously entertaining story set amongst the stars.