Walt Disney Studios Home Entertainment has announced the addition of two more classics to their Diamond Edition line for the coming new year. 2012 will see the release of the Disney favorites Lady and the Tramp and Cinderella in Diamond Edition releases on Blu-ray and DVD.  No firm date or details have been supplied as yet for Cinderella, but Lady and the Tramp is scheduled to be released on Blu-ray February 7, 2012 and on DVD March 27, 2012. The 3-Disc Blu-ray Combo Pack (Blu-ray + DVD + Digital Copy)  will sell for $44.99 U.S./$51.99 Canada and the 2-Disc Blu-ray Combo Pack (Blu-ray + DVD) at $39.99 U.S./$46.99 Canada respectively. The Blu-ray will feature a 2.35:1 high definition transfer with DTS-HD Master Audio 7.1 soundtrack as well as “Disney Enhanced Home Theatre Mix” 5.1 in English, French, and Spanish with English SDH, French, and Spanish subtitles. 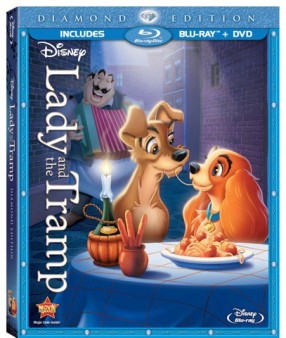 Further details for Lady and the Tramp: