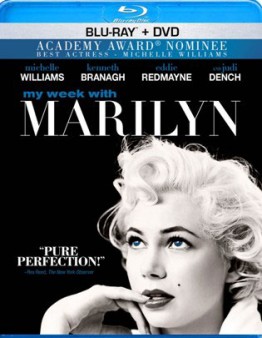 acclaimed Oscar Nominated (Best Actress in a Leading Role/Michelle Williams) film My Week With Marilyn to Blu-ray Combo Pack (Blu-ray+DVD) on March 13, 2o12 at a SRP of $39.99.

“One of the best movies of the year.”
~ Jan Wahl, KCBS

Based On A True Story And Featuring An Award-Winning Cast,
MY WEEK WITH MARILYN Heads To Retail On March 13, 2012!

Rex Reed, film critic for The New York Observer, hailed MY WEEK WITH MARILYN as “Pure perfection!”  In her review for TIME magazine, film critic Mary Pols wrote, “Michelle Williams captures Monroe’s mystique and humanity with uncanny accuracy.”  Wrote Vanity Fair film critic, Bruce Handy, “Michelle Williams is flawless, brilliant and exhilarating.  I can’t think of a better performance in the role of an icon.”  Pete Hammond, film critic for Deadline Hollywood, described the film as “One of the most purely entertaining films of the year!”  Finally, in his review for The New Yorker, film critic David Denby called the film “Charming and touching.  Expertly made… Michelle makes the star come alive.”

During Marilyn Monroe’s (Michelle Williams) first trip to London to film The Prince and the Showgirl with Sir Laurence Olivier (Kenneth Branagh), she befriends Colin Clark (Eddie Redmayne), an ambitious 23-year-old Third Assistant Director on the set.  As their relationship progresses, Colin’s focus shifts from making his way in the film business to rescuing her from the pressures of celebrity life.  When Monroe’s new husband, playwright Arthur Miller, makes a brief trip to Paris, Clark takes the opportunity to introduce her to the world outside of Hollywood fame.  Based on the true story by Colin Clark, this memoir describes a magical week in which Monroe opens herself up to a stranger and finds in him a confidant and an ally.

The MY WEEK WITH MARILYN Blu-ray™ Combo Pack and DVD bonus features include an audio commentary with director Simon Curtis and a “The Untold Story of an American Icon” featurette.  Note: Special features are subject to change.

Learn more about MY WEEK WITH MARILYN at: https://myweekwithmarilynmovie.com/