Red 2 on Blu-ray in November from Summit Entertainment

Fans of the breakout hit Red, will be pleased to know that Summit Entertainment has announced the Blu-ray release date for the film’s sequel, Red 2 for the suggested retail price of $39.99. It will come packed with a DTS-HD Master Audio 7.1 soundtrack and English SDH subtitles. Set to hit streets just in time for the holidays on November 26th, 2013, the sequel reunited stars Bruce Willis, John Malkovich, Helen Mirren, Mary-Louise Parker and Anthony Hopkins. The release will include a few features, as well as a DVD and UltraViolet Digital Copy. See further details below.

The high-octane follow-up to the worldwide hit, Red 2 arrives on Blu-ray Combo Pack (plus DVD and Digital HD UltraViolet), DVD (plus Digital Ultraviolet), Video On Demand and Pay-Per-View on November 26 from Summit Entertainment, a LIONSGATE Company. The film will be available on Digital HD two weeks early on November 12. 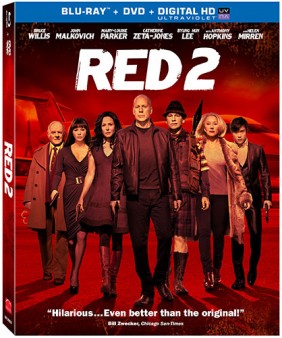 Bruce Willis (The Expendables) stars as retired black-ops CIA agent Frank Moses, who must reunite his unlikely team of elite operatives to take on a new set of enemies on a mission that is “smart, sexy and packs a wallop!”(AM New York). Featuring an outstanding all-star cast including John Malkovich (Burn After Reading), Mary-Louise Parker (Showtime’s “Weeds”), with Anthony Hopkins (Thor) and Helen Mirren (The Queen), Red 2 proves the best never rest.

Retired black-ops CIA agent Frank Moses (Willis) and his team set out on a global quest to track down a missing, next-generation lethal device that can change the balance of world power. To succeed, they’ll need to survive an army of relentless assassins, ruthless terrorists and power-crazed government officials, all eager to get their hands on the technologically advanced super weapon. Outgunned and outmanned, they have only their cunning wits, old-school skills and each other to rely on as they try to save the world – and stay alive in the process.

The Red 2 Blu-ray Disc and DVD bonus materials include “The Red 2 Experience,” an in-depth look at the film’s characters, weapons, spy gadgets and stunts, as well as deleted scenes and a gag reel and will be available for the suggested retail price of $39.99 and $29.95, respectively.