The BFI have announced the next release in their Adelphi Collection series and it is a double bill featuring director John Guillermin’s The Crowded Day and Song of Paris in a Dual Format (Blu-ray + DVD) package. The release will sell at an RRP of £19.99.

The third release from the BFI’s The Adelphi Collection, out on 14 February, is a vintage double bill of drama and comedy from British director John Guillermin (Death on the Nile, The Towering Inferno), released for the very first time, in a Dual Format Edition with Blu-ray and DVD discs of both films. 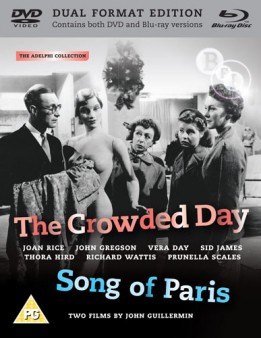 A high-quality comedy-drama aimed squarely at the women’s market, and billed as “a story of shop girls and their men,” The Crowded Day was perhaps the most ambitious production of the family-run Adelphi film company. Still resonant today, it offers both top-drawer entertainment and a fascinating insight into women’s lives, experiences and aspirations – from fashions to family – in the post-war period.

Song of Paris (1952) is a delightful romantic comedy which sees an archetypal Englishman – suavely played by debonair Dennis Price – return from a jaunt abroad to face a dastardly foreign count in a screwball duel for the hand of a beautiful mademoiselle.

Digitally restored and with new High Definition transfers taken from the original elements preserved at the BFI National Archive, the films are packaged with an illustrated booklet that includes film notes, original promotional materials and new essays by John Guillermin, actresses Prunella Scales and Vera Day, author Mary Cadogan on ‘The Crowded Day and the 1950s’ and BFI National Archive Curator Vic Pratt.