Walt Disney Studios Home Entertainment has detailed the second release in a planned five movie series for their “Disney Fairies” direct-to-video movies. Tinker Bell and The Lost Treasure will be released to Blu-ray combo pack (Blu-ray + DVD)  on October 27, 2009 day-and-date with the DVD release at an SRP of $39.99 for the Blu-ray and $29.99 for the DVD respectively. 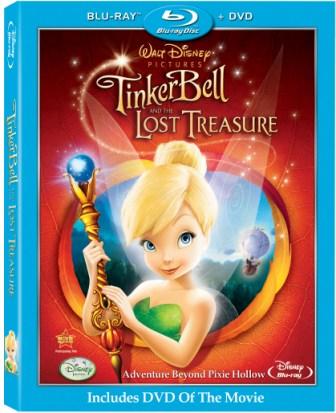 From Disney: “In Tinker Bell and the Lost Treasure Tinker Bell’s greatest adventure yet takes place in Autumn, as the fairies are on the mainland changing the colors of the leaves, tending to pumpkin patches, and helping geese fly south for the winter.  The rare Blue Moon will rise, and when its light passes through the magical Fall Scepter that Tinker Bell has been summoned to create, Pixie Hollow’s supply of pixie dust will be restored.  But when Tinker Bell accidentally puts all of Pixie Hollow in jeopardy, she must venture out across the sea on a secret quest to set things right.

Along her journey Tink meets new friends, including Blaze, a cute and courageous firefly that helps Tinker Bell complete her mission.  It’s a long and dangerous journey, full of astonishing encounters, a few narrow escapes and a daring rescue by Tink’s friend Terence.  Tinker Bell and the Lost Treasure is an exciting adventure and a once-in-a-blue-moon experience for the entire family.”

Extra features are listed as:

• Scenes You Never Saw – These fairy funny alternate scenes did not make it into the
movie.
• Magical Guide to Pixie Hollow – Tinker Bell and Terence are your guides as you explore
the autumn area of Pixie Hollow.
• Deleted Scenes with Filmmaker Introductions – Play deleted scenes with optional intros
by Director Klay Hall and Producer Sean Lurie.
• Pixie Hollow Comes To Florida – Discover how the filmmakers helped transform Epcot
into Pixie Hollow.