We’ve received word that in celebration of tomorrow’s release of Tron: Legacy on Blu-ray 3D, Blu-ray and DVD and Tron on Blu-ray for the first time, there’s going to be a signing event at the Best Buy in West Hollywood, CA featuring Joe Kosinski, director of TRON: Legacy and Steven Lisberger, director of TRON: The Original Classic Special Edition and producer, TRON: Legacy. Both Joe and Steven will be signing Blu-ray and DVD versions of TRON: Legacy and TRON: The Original Classic Special Edition.

Additionally, to coincide with tomorrow’s release, Disney is has a limited time offer for $5 off on the Tron: Legacy 4-Disc Blu-ray Combo Pack or 5-Disc 2-Movie Collection. Each set contains the Blu-ray 3D, Blu-ray, DVD, and Digital Copy of Tron: Legacy. The 5-Disc set adds in Tron: The Original Movie Classic on Blu-ray. 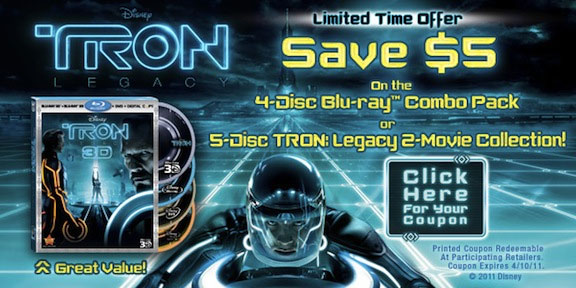